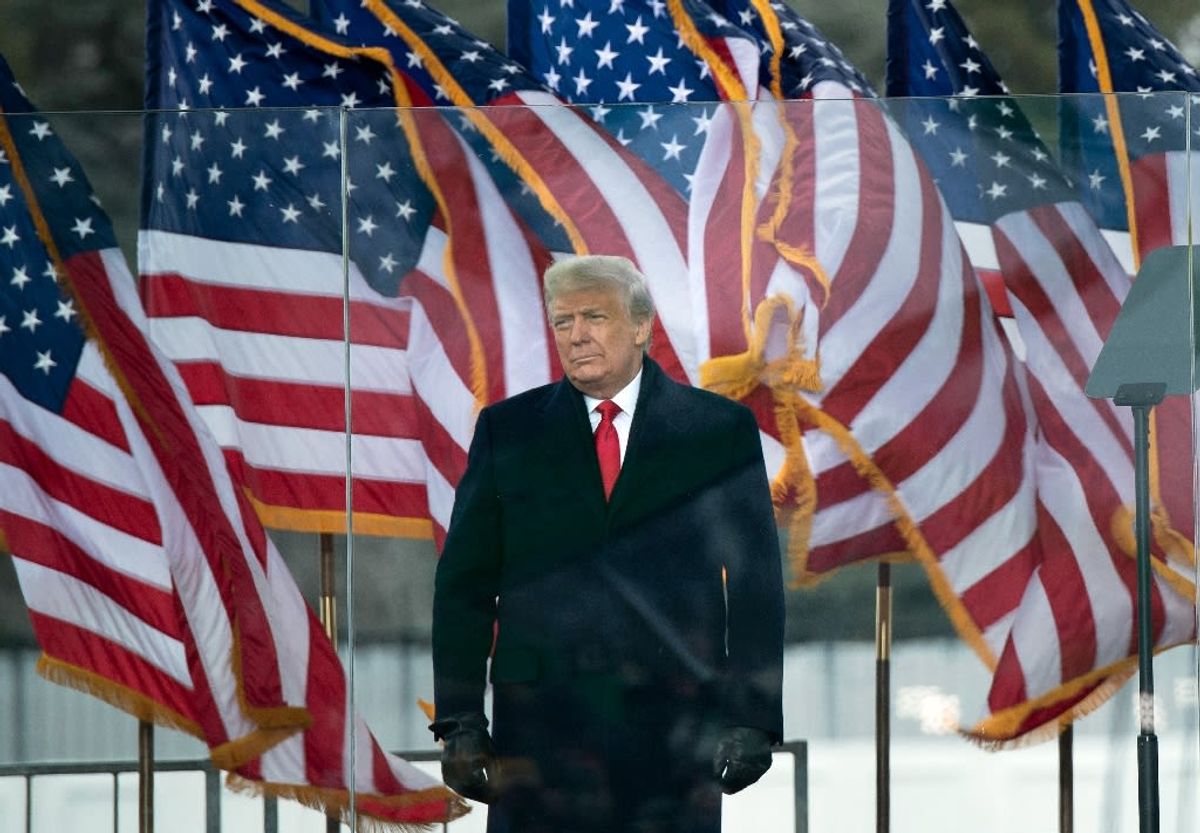 US President Donald Trump arrives to speak to supporters near the White House on January 6, 2021 -- the speech that would lead to his impeachment

Rep. Eric Swalwell (D-CA) laid out damning evidence that showed former president Donald Trump helped plan the Jan. 6 insurrection by telling his supporters that the election had been stolen from him -- and they must act to overturn the results.

The California Democrat introduced multiple Trump tweets as evidence in the Senate impeachment trial, and revealed the former president's campaign purchased ads encouraging supporters to come to Washington, D.C., on the day that Congress was set to certify Joe Biden's election win.

"On Dec. 26 he tweets, 'If a Democrat presidential candidate had an election rigged and stolen, with proof of such acts at a level never seen before, the Democrat senators would consider it an act of war and fight to the death,'" Swalwell told senators. "'Mitch and the Republicans do nothing, just want to let it pass, no fight.' He is saying the Republicans are doing nothing and have no fight because you are doing your job taking on the constitutional process of certifying the Electoral College results. He also suggests, President Trump, that if this was the reverse and the Democrats had lost, it would be an act of war."

"An act of war," he added. "That's how Donald Trump prepared his supporters for Jan. 6. He even stated again 14 minutes later to make sure his supporters understood, quote, 'The Justice Department and the FBI have done nothing about the 2020 presidential election voter fraud. The biggest scam,' all caps, 'in our nation's history despite overwhelming evidence. They should be ashamed.' Then, he adds, 'History will remember. Never give up. See every one in D.C. on Jan. 6.' That phrase, history will remember, was the only time, the first time, Donald Trump had used it in his presidency. He sent this to 70-plus million Twitter followers the day they needed to show up and be ready to fight."

Trump reminded them again Dec. 27 and Dec. 30, the lawmaker said.

An hour later he retweeted a post stating "the cavalry is coming" by Women for America First head Kylie Jane Kremer, who organized the Jan. 6 "Stop the Steal" rally in Washington, and the former president spent $50 million from his legal defense fund to buy ads amplifying the same message.

"They were released nationally, played in video ads, online advertising and targeted text messages," Swalwell said. "They used the same words and phrases that President Trump had been spreading for months, that the election was full of fraud, to stop the steal. Now they had a specific purpose. How do we know that purpose? These ads were designed to run all the way up to Jan. 5, then they stopped. This was purposeful and deliberate planning to target his base to rally around that day. It wasn't just his ads, he continued to use his own platform. He told his supporters, who truly believed their victory had been stolen and who were ready to fight, when, where and how to stop what he believed was a steal."

"Donald Trump would issue a deliberate call to action and, just like in his ads, that action centered around Jan. 6," Swalwell added. "On Dec. 19, at 1:42 in the morning, our commander in chief tweeted, 'Big protest in D.C. on Jan. 6. Be there, will be wild.' Will be wild. We know why he picked this day, it wasn't random. It was his last chance to stop a peaceful transition of power. He gave his supporters plenty of time to plan."