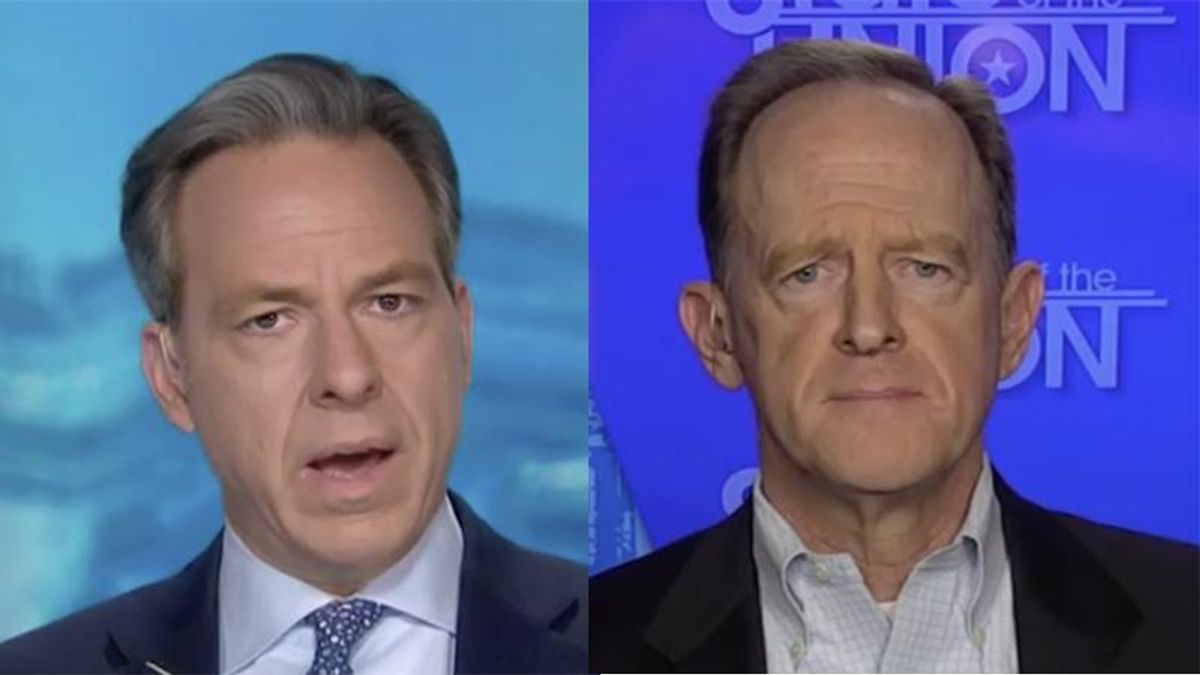 Sen. Pat Toomey (R-PA) was put on the spot on CNN's "State of the Union" on Sunday morning when host Jake Tapper showed him a clip of himself on the Senate floor stating his desire to rush a bill through as quickly as possible just after he complained about President Joe Biden's decision to do just that with COVID-19 aid.

"You opposed that $600 billion bill from the ten senators," Tapper began.

"Absolutely, I opposed it, but my point is, if you're President Biden and you're serious about having a bipartisan working together with people on the other side, bringing people together in unity, he has the opportunity to do it," the GOP lawmaker replied. "I don't support that because I think it's completely inappropriate, but there are more than ten Republican senators that disagree with me and would do this, but yet they appear to be intent on ignoring Republicans."

"So President Biden, as you know, has signaled that he is moving forward on his plan with or without Republican support," Tapper replied before showing a clip of the new president claiming," I would like to be doing it with the support of Republicans, but if I have to choose between getting help right now to Americans who are hurting so badly and getting bogged down in a lengthy negotiation or compromising on a bill that's up to the crisis, that's an easy choice."

"That sentiment actually sounds a little bit like what you said when you wanted to pass a bill that you supported with only 51 votes after Republicans won in 2016 -- take a listen," Tapper continued before rolling the clip where Toomey stated, "I am hoping that our Democratic colleagues will work with us so that we can begin to make the constructive changes that we need, but if not, I think we should use all tools available to get this job done."

"So how is what he's doing any different from what you said?" the CNN host pressed.

"Because I was talking about tax reform in the context of all but three democrat senators sending us a letter basically refusing to participate in the tax reform that we wanted to do," Toomey protested. "President Biden doesn't face that at all. We've done five bills with Republican support. overwhelming, almost unanimous Republican support, and president Biden has at least ten Republican senators, which is all he needs to do yet another bipartisan bill, and he's refusing. So these are very dissimilar, Jake."