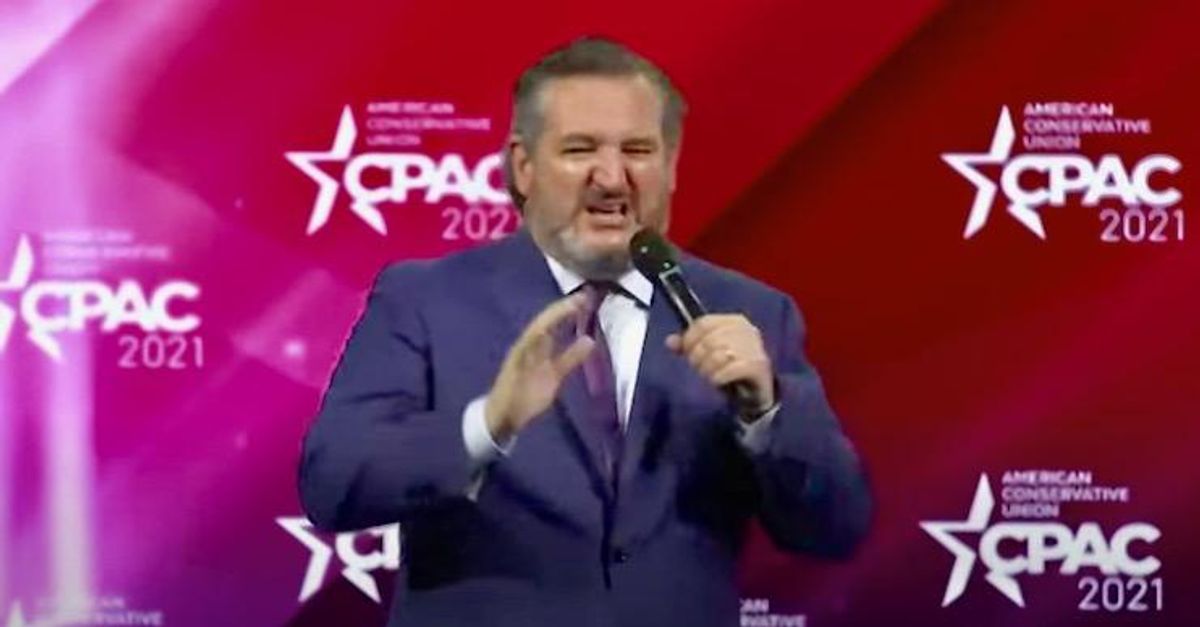 Sen. Ted Cruz (R-TX) joined with Sens. Lindsey Graham (R-SC) and Marsha Blackburn (R-TN) on Thursday to sound the alarm about something that likely won't happen: increasing the size of the Supreme Court.

After Republicans stole a Supreme Court seat from former President Barack Obama after Antonin Scalia died, Democrats are demanding retribution by adding seats to the court to reestablish a balance in the court. It's something that President Joe Biden said that he would think about, but it isn't likely to happen, because it would require passage from a divided Senate.

Still, Republicans held a press conference sounding the alarm about the proposed bill. The ironic moment came when Cruz proclaimed that when the GOP was in power they didn't pack the courts. It was a claim that drew outright laughter from anyone who experienced the years of court-packing under former President Donald Trump.

As KFile's Andrew Kaczynski fact-checked, the Texas senator said in 2016 that Republicans "wouldn't or might not confirm Clinton nominees for SCOTUS because, 'there is long historical precedent for a Supreme Court with fewer justices.'"

Cruz did the reverse, said they wouldn’t or might not confirm Clinton nominees for SCOTUS because, “there is long… https://t.co/MrGYtt4Ay1
— andrew kaczynski (@andrew kaczynski)1619103574.0

It prompted several responses from observers aware of the recent history. See their tweets below:

@LindseyGrahamSC @tedcruz @MarshaBlackburn Wow! The 3 most corrupt pieces of trash in the Senate all together. How could that happen?
— Dog Is My Copilot (@Dog Is My Copilot)1619103640.0

@tedcruz are you this obtuse???????? Merrick Garland's hearing or lack thereof for Scalia's seat? Rushing to place Barrett after Ginsburg?? What goddamned alternate reality do you exist in???
— Glenn Chavez (@zygspytz) April 22, 2021

They shoved ACB down our throats 8 days before a presidential election, while they denied Merrick Garland a single… https://t.co/XeQfP9lPtn
— BiCoastal Elitist (@BiCoastal Elitist)1619104506.0