In a Sunday tweet, the New York Times reported about the strong uprising happening in Cuba. Protesters have flooded the streets, standing up to their dictatorship, tyranny, poverty, inequality, pathetic healthcare and calling for freedom. It isn't the first time that Cubans have been brave enough to stand up, but it's the first in a very long time.

Conservatives on Twitter lost their minds, however, because the New York Times posted the story saying that the protesters were "chanting 'freedom' and other anti-government phrases." Freedom is an anti-government phrase in Cuba where the long-running dictatorship attempts to control every move and bar any effort to speak out against them. While most children are taught about it in middle school, it seemed many had forgotten.

Fox News even lied about the tweet, saying that the New York Times called "freedom" an "anti-government slogan," leaving it to sound like the Times was calling it against the United States. 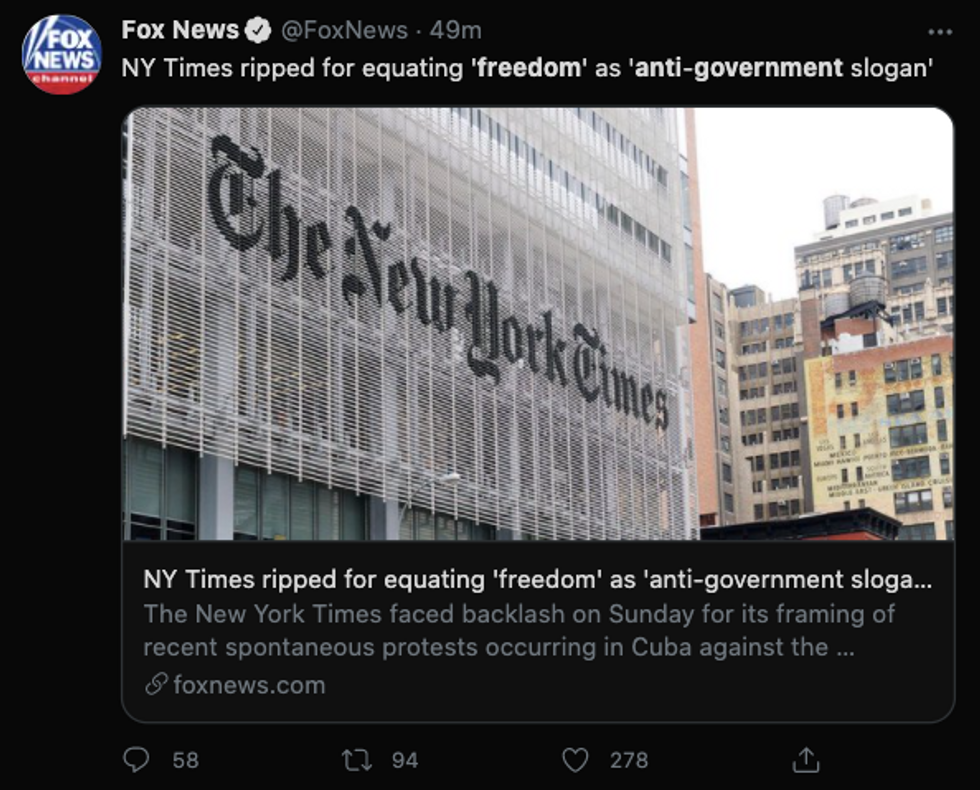 Sen. Ted Cruz (R-TX) was one of those who lashed out at the Times about the tweet. But oddly, he'd just advocated for Cuban freedom a few hours prior. He's also repeated the same quote from his father about Cuban freedom three times.

I am a conservative carpenter in Wisconsin and even I know what they meant. To the Cuban government the people shouting this is anti-government. Am I actually having to tell this to Ted Cruz\u2026Delete this tweet, I\u2019m losing all hope even in conservatives now.
— hmm... (@hmm...) 1626049772

The Communist Cuban regime will be consigned to the dustbin of history. It has brutalized & denied freedom to generations of Cubans, and forced my family & so many others to flee. \n\nThe American people stand squarely with the men & women of Cuba and their noble fight for liberty.https://twitter.com/tpostmillennial/status/1414326870003396608\u00a0\u2026
— Ted Cruz (@Ted Cruz) 1626045843

But when conservatives saw the tweet, they believed it was the New York Times saying that "freedom" was a word that was against all government or perhaps against the U.S. government. It isn't clear.

But it was certainly something that many conservatives were mocked for not knowing or understanding about the tiny island.

One of the biggest problems facing conservatives is that they frequently take stories like these and twist the info into something that perpetuates their narrative that the "left" or the "media" is against them. The same thing happened with the Mr. Potato Head story. The toy company Hasbro was expanding Mr. Potato Head to have a whole Potato family where people could dress up their potatoes however they want for whatever outfits they want. Potatoes don't have a gender, but Fox News claimed it was Democratic cancel culture.

In another case, Fox News hosts crafted a conspiracy that Democrats banned Dr. Seuss because his estate decided not to publish some of the older books that had outdated imagery seen as racist today.

This manufactured crisis is yet another example and it will likely fill the airwaves of Fox News and other right-wing media outlets on Monday.

Others on both sides were quick to school the "nimrods" on Twitter.

The protesters in Cuba, while protesting against the government, are shouting 'Freedom!' Are you really trying to say they're shouting a pro-government slogan while doing it?
— LaserShark (@LaserShark) 1626053122