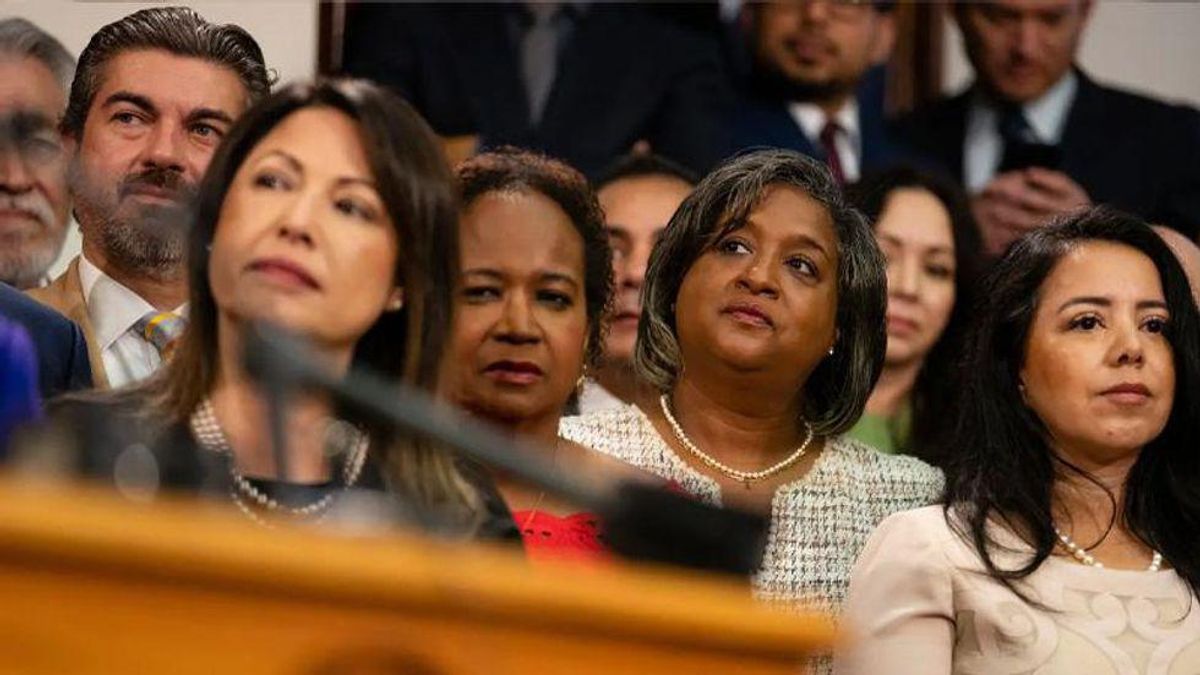 Members of the House Democratic Caucus attend a press conference on the opening day of the special session at the Texas Capitol on July 8, 2021. (Credit: Sophie Park/The Texas Tribune)

More than a week after Republicans in the Texas House voted to authorize arrests of their quorum-busting Democratic colleagues, no such roundup has come to fruition.

As of Wednesday, there were no known cases of absent Democrats being arrested, and the chamber was still shy of the 100 members it needs for a quorum to conduct official business. That is despite its Aug. 10 vote to proceed with the arrests, Speaker Dade Phelan's signing of 52 warrants later that day and his announcement two days later that the House sergeant-at-arms had deputized state law enforcement to track down the missing Democrats.

So far, it appears that their bark is worse than their bite: Grand Prairie Rep. Chris Turner, the leader of the House Democratic Caucus, said Tuesday that "the only thing that [he's] aware of is that the House sergeant-at-arms has paid a visit to some members' homes."

Phelan spokesperson Enrique Marquez said Wednesday that the House sergeant-at-arms and law enforcement had "already visited several major metropolitan areas" to try and locate absent members "and will continue to do so until quorum is reached."

But it's still unclear whether the situation will escalate to the point of actual civil arrests, which Rep. Jim Murphy of Houston, the chair of the House Republican Caucus, acknowledged during a caucus news conference on Monday at the Capitol.

"I don't know that they're gonna go to that level," Murphy said. "At this point it's more like a jury summons … a paper that's delivered, and that'll be another conversation down the line."

The House is not publicly tallying attendance every day, but the last time the chamber took a vote that revealed who was there, on Aug. 10, there were 93 members present — seven short of a quorum.

Unlike Murphy, some GOP leaders outside the chamber have used stronger language about securing a quorum, raising expectations for a more aggressive effort. Gov. Greg Abbott said at the beginning of the first special session that the Democrats would be "corralled and cabined in the Capitol," while U.S. Sen. Ted Cruz argued there is "clear legal authority to handcuff and put [the quorum-breakers] in leg irons."

No such tactics have come to light so far. And if lawmakers were detained, they could only be brought back to the House chamber and would not face criminal charges or fines.

House leadership might be weighing the optics of physically detaining the quorum-breakers, many of whom are members of color. Democrats themselves have taunted House leadership over those optics, with Rep. Celia Israel of Austin saying leadership is "bluffing" and asking, "Do they really want to arrest a woman of color?"

Rep. Bryan Slaton, R-Royse City, suggested concerns from his party about those images could be fueling the hesitancy to follow through on arrests.

"We have Republican leadership scared to actually arrest people and bring them back," Slaton said Tuesday. "The Democrats seem to have a lot of power over us."

While there has been a legal battle over the authority to arrest Democrats, the Texas Supreme Court cleared the way Tuesday, ruling that the state Constitution allows the House to "physically compel the attendance of absent members."

One of the quorum-breakers, Rep. Vikki Goodwin of Austin, said a paper arrest warrant was left on her front porch last week. She said lawyers have told Democrats that if law enforcement tries to arrest them, they should not resist but should make clear they would not be willingly going to the House floor.

"I think it's just an intimidation tactic, trying to get members to come back because there is this outstanding arrest warrant," Goodwin said. "I think it doesn't really show well if they physically detain us."

A House sergeant visited the Houston home of another quorum-breaker, Rep. Jon Rosenthal, on Tuesday, according to his chief of staff, Odus Evbagharu.

Both Goodwin and Rosenthal have declined to share any details about their locations, other than that they are no longer in Washington, D.C. More than 50 Democrats fled to the nation's capital at the start of the first special session last month, protesting the GOP's priority elections bill.

The legislation would, among other changes to state elections, outlaw local voting options intended to expand voting access, further tighten the voting-by-mail process and bolster access for partisan poll watchers. Republicans have characterized the legislation as an "election integrity" proposal that would bring much-needed reforms to the state's voting system. Democrats and voting rights groups have argued the proposal would harm marginalized voters in the state.

The House first voted to authorize arrests when Democrats left for Washington last month. But it was not as consequential then because most Democrats were out of state, where Texas law enforcement does not have jurisdiction.

Now, the group in Washington has thinned out, and an untold number of Democrats are back home but still refusing to come to the House floor.

Last week, copies of the arrest warrants signed by Phelan were distributed in emails from Michael Black, the sergeant-at-arms, who offered to "assist" members in "making any necessary arrangements" to be present in the chamber. Black and other sergeants also delivered the warrants to members' Capitol offices.

Turner, the chair of the House Democratic Caucus, said Tuesday that the warrants have not changed Democrats' minds over potentially returning to the chamber — and "in fact it's likely had the opposite effect in escalating the situation."

Meanwhile, Republicans have expressed a growing sense of frustration over their absent colleagues, with a number of GOP members pointing to House rules lawmakers adopted unanimously in January that outline the procedure for what the chamber can do to help secure a quorum.

Rep. Tan Parker, a Flower Mound Republican running for state Senate, increased pressure Tuesday on Phelan to make good on the arrests. In a statement, Parker called on the speaker to instruct the Texas Department of Public Safety "to use all means necessary to enforce the civil arrest warrants," saying "the time for niceties and cordiality has passed."

In the meantime, monotony continues in the House, where Republicans have become accustomed to showing up for a brief, formulaic meeting each day. The House comes to order, one of them says a prayer, they say the Pledge of Allegiance and after a lull, Phelan releases them for the day.

On Tuesday morning, the prayer was led by Rep. Matt Shaheen of Plano, who invoked his missing colleagues and asked God to "provide them safe travels as they return to the state of Texas," whenever that may be. After the pledge, members sang "Happy Birthday" to one of the parliamentarians, Sharon Carter.

"All the parliamentarian wants for her birthday," Phelan said afterward, "is a quorum."