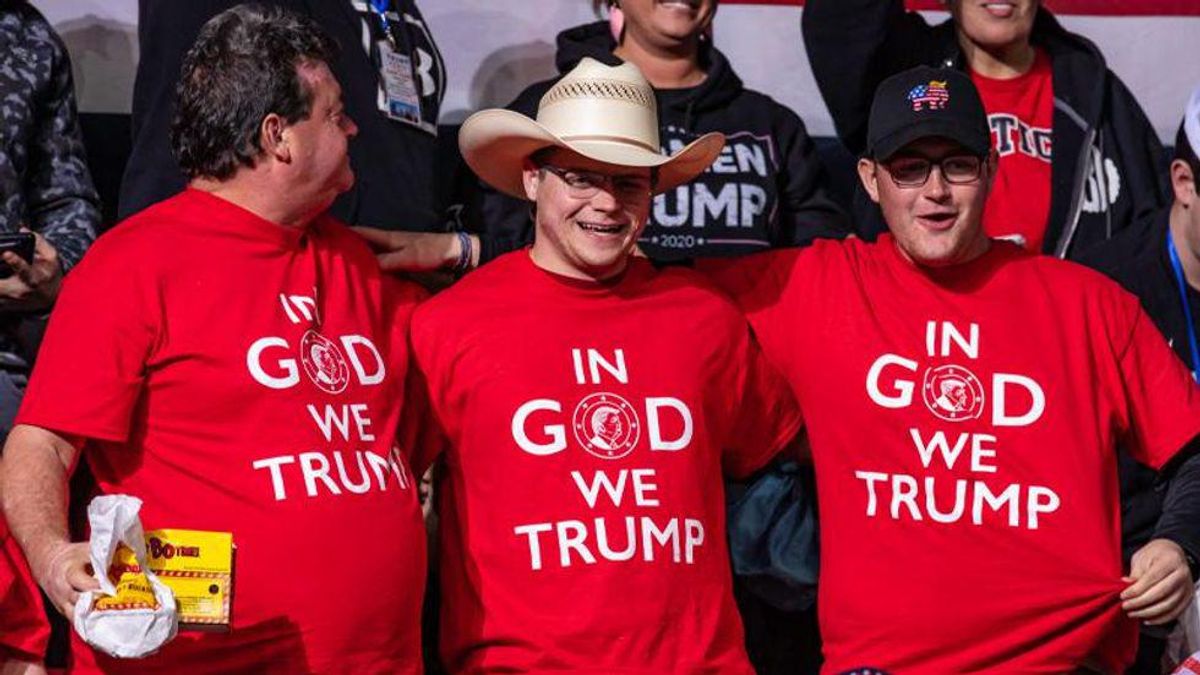 President Trump supporters wearing faith in God and Trump shirts at the rally in the Bojangle's Coliseum. (Jeffery Edwards / Shutterstock.com)

So, again, with feeling: Anti-vaccine GOP leaders are lawless. Their followers are often criminal. (I mean this literally.) I'm going to keep repeating myself no matter how many times they claim to be "fighting for their freedom." I'm going to keep calling on the government to put an end to lawlessness no matter how much they hue and cry about "tyranny." Criminals are "free" to break the law, too. Then they are found and punished. The president was right to say the unvaccinated are the problem. His mandate forces tens of millions of them to get vaccinated. They are literally robbing the rest of us of our freedom.

This is important to point out, because the discourse so far keeps framing the question as one between freedom and government, as if government and freedom were opposites. Sure, they are opposites — if you are a conservative. That the discourse is framing them as antipodes is a consequence of the last half-century being dominated by the Republican Party's preferred ways of looking at the world. "Negative liberty," as Isaiah Berlin put it, is only one meaning of liberty, and it is, furthermore, often the narrowest, brittlest and dumbest.

The government can violate individual freedom. When it does, its efforts must be opposed. But that doesn't make it the opposite of freedom. Why? Because the government is us. Good or bad, right or wrong, what the government does in our name, we do to ourselves. This democratic meaning of government, and the implications for freedom inherent in it, is as complex as the multi-racial republic we live in. But conservatives dislike complexities. They complicate preferred pieties. It's easier to think of the absence of government as the presence of freedom. That's also easily the worst worldview in a pandemic that has killed the equivalent of more than 226 9/11's.

The discourse is moving in the right direction. Pundits of high perch like David Leonhardt are making room for other kinds of freedom, like the freedom from a disease that's holding back our lives, our economy and our country. As the Times columnist said recently, freedom isn't doing whatever you want, whenever you want, consequence-free.

There are two ways to think about freedom, right? One is, does someone have the freedom not to get a vaccine shot? That's a legitimate question. The other is, do we as Americans have the freedom to go out and know that we are less vulnerable to a deadly virus? That is also a form of freedom.

This still plays into the Republicans' hand, though. It's not enough to let these dual freedoms — one positive and one negative, one for vaccine mandates and one against them — hang in the air as if they are not being felt by real people. Fact is, one of these freedoms is robbing the other. Republican lawlessness is making that possible. Republican followers are committing crimes (minor ones, so far). We need less talk about abstract freedoms and more about concrete law and order.

The Post's Greg Sargent reported recently on a new memo circulated by the Democratic Congressional Campaign Committee. It advises Democrats in swing districts to take aim at Republicans for prolonging the pandemic and damaging the economy. Greg quoted the memo:

"House Republicans have lied about its impact" and "dangerously rejected medical guidance to wear masks and social distance," the memo says, adding that "extremist Republicans" have "even encouraged Americans to consume horse and cattle dewormer."

This is good, but it needs to go farther. We need more Democrats, especially moderate Democrats, talking about the real crisis we are facing. It is not the covid. We have a vaccine for that. It works. If everyone did their part and got fully vaccinated, the pandemic would be over. Therefore, the real crisis isn't medical — it is behavioral. The real crisis is widespread lawlessness and criminality concentrated in a political party wrapping itself in "freedom" and the American flag.

If I were a moderate Democrat from a swing district hoping to keep my seat in the coming midterms, I would be tapping into a deep well of rhetoric that's been long perfected by the GOP — law and order. I wouldn't be mincing words about whose freedoms deserve protecting. I would be making it plain that law-abiding citizens who did their part to end this pandemic have the right to call on the government to put an end to a crisis of lawlessness and criminality that's plaguing society. I would do it with the same righteousness as any Republican would if the topic were Black and brown people protesting in the streets.

I would do it knowing I was absolutely right.