The Conversation
Growing food in space will rely on innovative agricultural technologies. (NASA)

Could we feed a city on Mars? This question is central to the future of space exploration and has serious repercussions on Earth too. To date, a lot of thought has gone into how astronauts eat; however, we are only beginning to produce food in space.

Space launches are quite expensive. And with the growing desire to establish a human presence in space, we are going to have to consider food production in space. But the challenges are vast, requiring research into how plants respond to a variety of changes including to gravity and radiation.

As food and agriculture researchers, we explored this question in our latest book, Dinner on Mars. We believe that a sustainable Martian food system is possible — and that in building it, we’ll change food systems on Earth. However, this will take some out-of-the-box thinking. 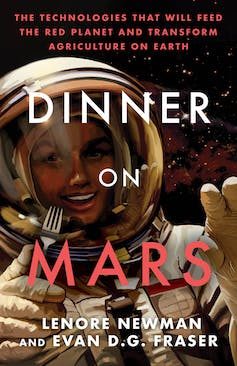 The basis of food systems on Mars would involve water harvested from the soil (rovers have shown that there are small but significant amounts of frozen water in the crust) and cyanobacteria, often referred to as blue-green algae.

On earth, cyanobacteria can be a big problem as it grows in polluted waterways causing eutrophication — a nutrient-induced increase in phytoplankton productivity in the water body.

On Mars, however, cyanobacteria can use the carbon dioxide in the atmosphere and grow on the sandy inorganic and toxic regolith — the layer of loose rocks and dust covering bedrock — to produce the basic organic molecules on which the rest of the food system will rest.

Cyanobacteria is capable of growing in Martian conditions, which has the very real added benefit of neutralizing extremely toxic chemicals called perchlorates. Perchlorates are laced throughout the Martian regolith and are toxic to humans in minute quantities, so having cyanobacteria provide a double duty of neutralizing the toxins while producing organic material will be a huge boon to any Martian community. 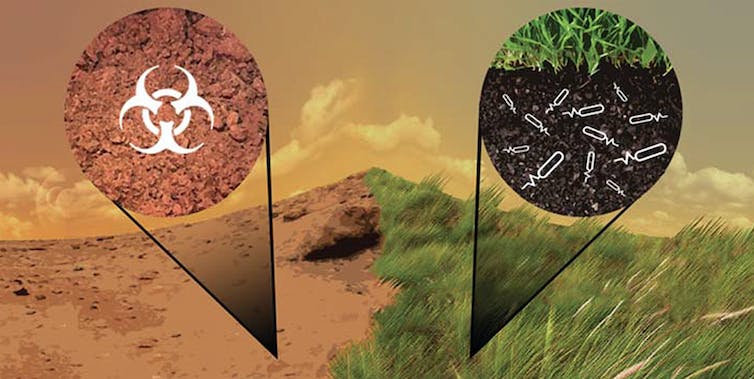 Cyanobacteria can help detoxify the environment on Mars. (NASA/Adam Arkin)

Once bacteria are happily growing away under a Martian sky, they will provide nutrients needed to support luxurious crops of plants. A Martian city could be imagined as a lush green place, with hydroponics and soil-bound crops filling tunnels, carpeting domed craters and growing away in every unused corner.

Carbohydrates might be in short supply, however, as they take up large amounts of space. Our grain consumption is likely to be lower on Mars, though legumes and grains will still appear in Martian diets in smaller quantities reflecting what can economically be produced on site.

All plants on Mars will also play key roles in oxygen generation, water recycling and the provision of raw organic material for manufacturing

These technologies are also valuable on Earth as we attempt to shorten supply chains and improve the availability of healthy fruit and vegetables in the winter months.

Animal-based systems will not be viable on Mars, but protein could be abundantly produced through cellular agriculture and precision fermentation. Precision fermentation involves creating proteins by utilizing modified yeasts, fungus and bacteria that consume starches and sugars — on Mars, this will largely come from food waste — and turn them into desired proteins.

Cellular agriculture involves taking stem cell samples and growing them in the lab to create cuts of meat identical to those from animal agriculture.

Imagining what agriculture could be like on Mars is a fascinating project, but it’s when we think about how these technologies may affect life on Earth that this topic becomes extremely serious. This is because on Mars — where each gram of organic matter, millilitre of water and photon of solar energy is scarce — there can be no inefficiencies.

The “waste” products of one part of the system need to be deliberately used as inputs into another part, such as using the dead cyanobacteria as a growth medium for later parts of the food system. But more than the technologies themselves, it may be the mindset of building a Martian food system that will change how things are done here on Earth, where one-third of all food is thrown away.

Our excitement about food technologies comes through in Dinner on Mars, but we are not techno-optimists. Technology isn’t a panacea. For example, if technologies like vertical farming reduce the need for farmland, then policies are required to ensure that the land will not just be paved over.

We also need to be mindful of the negative impacts of technologies, and be sensitive to how people’s livelihoods may need to change and adapt. Helping manage this transition and minimize disruption is another important area for policy.

The technologies unlocked by Mars, together with equitable policies, could place us on a much more sustainable trajectory on Earth.

Lenore Newman, Director, Food and Agriculture Institute, University of The Fraser Valley and Evan Fraser, Director of the Arrell Food Institute and Professor in the Dept. of Geography, Environment and Geomatics, University of Guelph