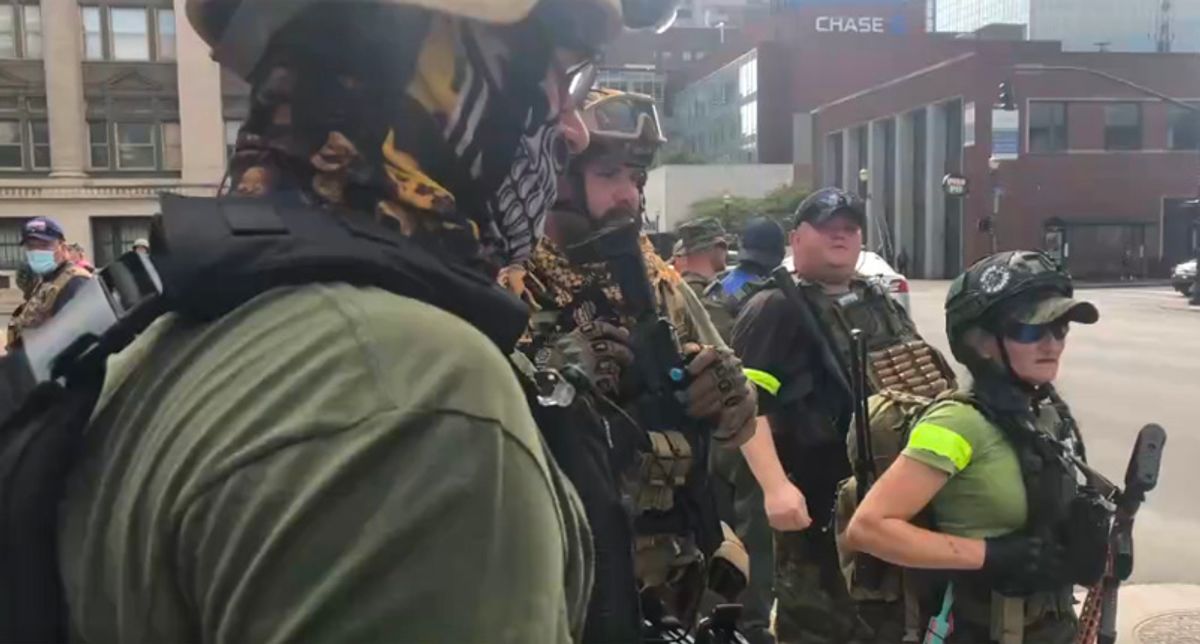 A data leak exposed the identities and other personal information of military service members and others involved in a right-wing paramilitary group.

The data leak from the American Patriots Three Percent website revealed the names, phone numbers and photographs of members -- who ranged in age from their 20s to 70s and were drawn from a variety of backgrounds -- that were obtained by activists who posted the information on an internet archiving site, reported The Guardian.

"A lot of us are former military, former law enforcement," said Phillip Whitehead, who spoke to the newspaper by phone. "Some of us have had high level security clearance. This has put myself and my family at risk."

The 61-year-old Whitehead, who serves as the commander of the American Legion in Prescott Valley, Arizona, served six years in the military and 34 years in law enforcement, including the U.S. Border Patrol, said he was "appalled" by the leak and blames the group's national leadership.

The group's founder, retired soldier Scott Seddon, started the group in 2009 "out of fear" following Barack Obama's election, but Whitehead said his public "outbursts" on Facebook had grown tiresome.

"I don't like his public behavior because I don't think that's what the organization should stand for," Whitehead said.

Whitehead insists the group was "not a militia," but rather "community protectors" that could be called in as auxiliaries by local authorities, but one extremism researcher said the AP3% "definitely have a far-right paramilitary structure and ideology."

"Military veterans involved in far-right paramilitary groups are not just betraying their oaths, they are threatening American democracy and national security," said Devin Burghart, vice-president of the Institute for Research and Education on Human Rights. "There is a staggeringly long list of far-rightist veterans trained in the use of lethal force overseas who turned those techniques on Americans back home in pursuit of political aims."

The group has taken part in live fire drills and acted as vigilantes during protests, such as the nationwide Black Lives Matter demonstrations this summer, and the data leak shows many members were current or former military or law enforcement, like Whitehead, but also such widely divergent backgrounds as dental hygienists, Apple Geniuses and beekeepers.

"[Secrecy is needed] honestly because most of the country doesn't share our values," Balog said, describing those values as "hardcore conservatism."

The group was an early adapter to social media, using Facebook to lure members -- many of whom were highly active in other militia-adjacent groups.

Scott Weiner, a 34-year-old from Canton, New York, is also the administrator of a Facebook group for collectors of German Iron Cross military medals and a member of seven militia-related Facebook groups including "Q Patriots," "Pissed Off Patriots of America," and "Red Pilled Patriots."

Other members of the AP3% group in Colorado posed for photos with Rep. Lauren Boebert (R-CO).