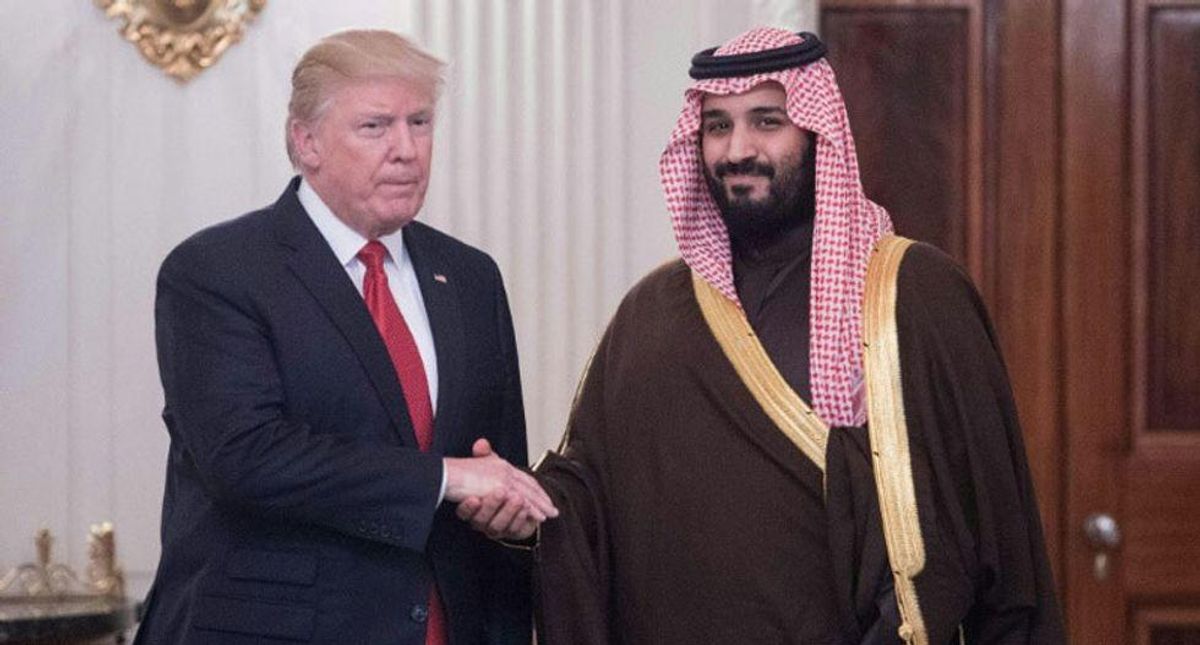 According to a deep dive looking into emerging evidence that members of the Saudi government were heavily involved in the 9/11 attack, the Intercept is reporting that the administration of Donald Trump may have inadvertently bolstered the case of families still engaged in a lawsuit twenty years after the attack.

According to the report, there is a mounting pile of evidence of Saudi involvement with the terrorists who hijacked planes and turned them into weapons after years of the U.S. government tamping down on such speculation.

As Eric Lichtblau and James Risen write, "Many U.S. officials have insisted over the last two decades that the American government is not really hiding any conclusive evidence of Saudi involvement, and it is quite possible that successive presidents, along with the intelligence community, have closed ranks simply to avoid revealing classified information," before adding, "Two decades later, however, glimpses of material that have become public provide mounting evidence that senior Saudi officials, including one diplomat in the Saudi Embassy in Washington, may in fact have indirectly provided assistance for two of the Al Qaeda hijackers, Khalid al-Mihdhar and Nawaf al-Hazmi, who were the first of the hijackers to arrive in the United States in 2000 and lived for about a year and a half in San Diego beforehand.

According to the report, a massive lawsuit filed in Manhattan by the families of 9/11 victims has been handed "11,000 still-secret pages of internal documents from the U.S. government" and "have deposed numerous Saudi witnesses to determine what they knew of the hijackers' plot, bolstering what they say is a trail of connections leading back to Riyadh."

Of particular note, the journalists write, is new evidence of Saudi involvement that came to light in a roundabout way in a court filing by the Trump administration last year that was intended to bolster the government's desire to keep more documentation from the public.

As Lichtblau and Risen wrote, "The Justice Department's public filing, first reported by Yahoo News, redacted numerous sections on national security grounds but inadvertently disclosed the name of a former official in the Saudi Embassy in Washington — 'Jarrah' — or Mussaed Ahmed al-Jarrah, who worked as a senior diplomat until about 2000 under Prince Bandar bin Sultan, who was then the long-serving Saudi ambassador to the United States."

"The document, citing a 2012 internal FBI summary, indicated that Jarrah was believed to have 'tasked' two other Saudi men living in southern California 'with assisting the hijackers' in San Diego, Mihdhar and Hazmi, who spoke little English," the Intercept report added. "The accidental disclosure, reaching inside the Saudi Embassy in Washington, could prove critical for the victims' families in establishing that Saudi Arabia bears some responsibility for the attacks."

The report goes on to add, "Other possible connections also led back to Prince Bandar, according to a 28-page section of a joint congressional inquiry in 2002, which was kept secret until its partial release in 2016. One intriguing piece of evidence came when an Al Qaeda operative was captured with the unlisted number for a Colorado company that managed Prince Bandar's estate in Aspen."

You can read more here at The Intercept.