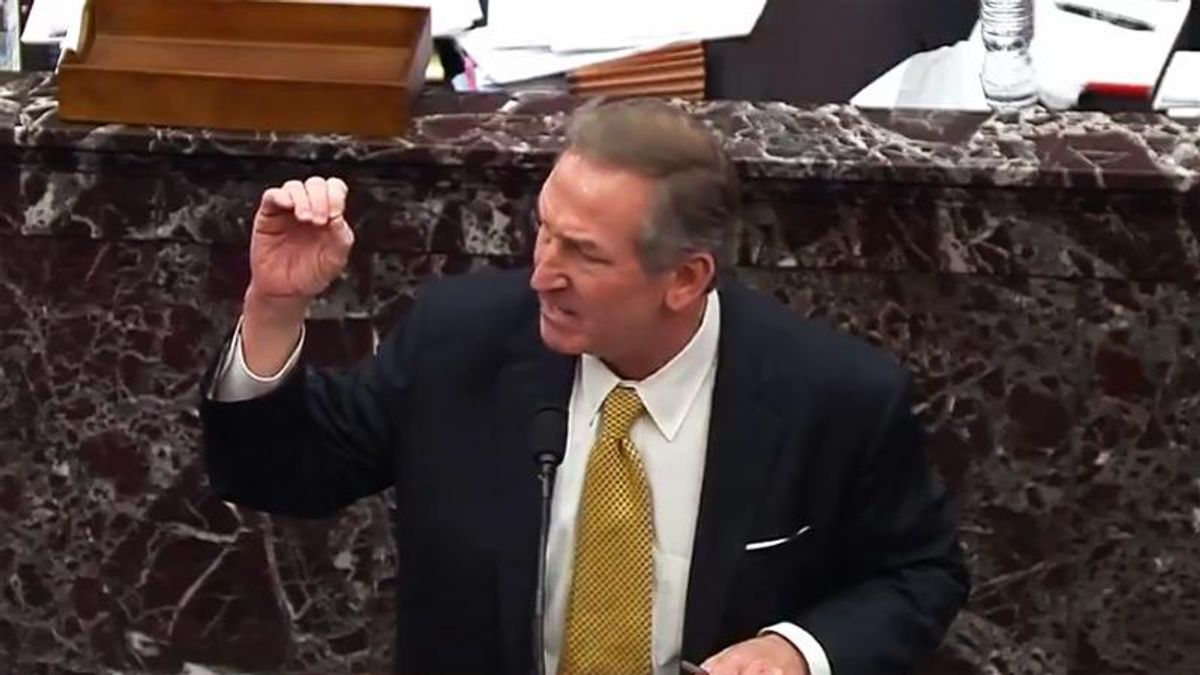 In his column for the Daily Beast, conservative Matt Lewis claimed American's should be insulted by both the antics and arguments put forward by the attorneys representing Donald Trump in his second impeachment trial.

Calling the assertions by attorneys David Schoen and Michael van der Veen a mishmash of "trickery and misdirection and whataboutism," the former Republican went on to say that any "normal person" who has been watching the proceedings would realize they have no defense for the president's actions and that Trump is "obviously guilty."

Focusing on their widely derided -- and seemingly endless -- video of Democrats using the word "fight," Lewis ridiculed the idea that they believed it would convince anyone that the Democrats words were in anyway comparable to the president's rhetoric on Jan. 6th that led to the Capitol riot.

"What Trump did was qualitatively worse. MUCH worse," he wrote. "Without rehashing his pattern of rhetoric and behavior that the prosecution ably demonstrated these last four days, when you tell an angry crowd that is gathered on the day the Electoral College votes are being certified that they have to 'fight like hell'—and then you order them to march down to the Capitol (where the votes are being certified)—the notion that the word 'fight' translates to 'don't forget to vote against my adversaries in the primary election two years from now' seems absurd."

Lewis went on to add that the fact that Trump's attorneys only used a minuscule part of the time allotted to them to present their case showed they had nothing and they know they were "dealt a bad hand" when it came to coming up with a defense.

"The fact that the defense only used a fraction of the time they were allotted suggests that even by stretching credulity and inventing defenses of Trump's behavior, they still could only keep up the charade for so long," Lewis wrote, adding, "Regardless, any normal person watching this trial would vote to convict Donald Trump. The prosecution has him dead to rights. The most absurd idea proffered by the defense might have been that if you impeach Trump you are infringing on his First Amendment rights. But there is no reason to believe that Trump is being penalized for taking controversial political positions. No, he is being held accountable for fomenting an insurrection."

Unfortunately, he lamented, Republicans in the Senate likely will side with Trump, with Lewis writing, "Their [Trump's attorneys] schtick wouldn't convince any reasonable person who was paying attention, but Republican Senators aren't reasonable. At least, they cannot be reasoned with."