Former Trump and GOP officials celebrate the fall of 'mean' Matt Gaetz: 'He's a blight on the conference' 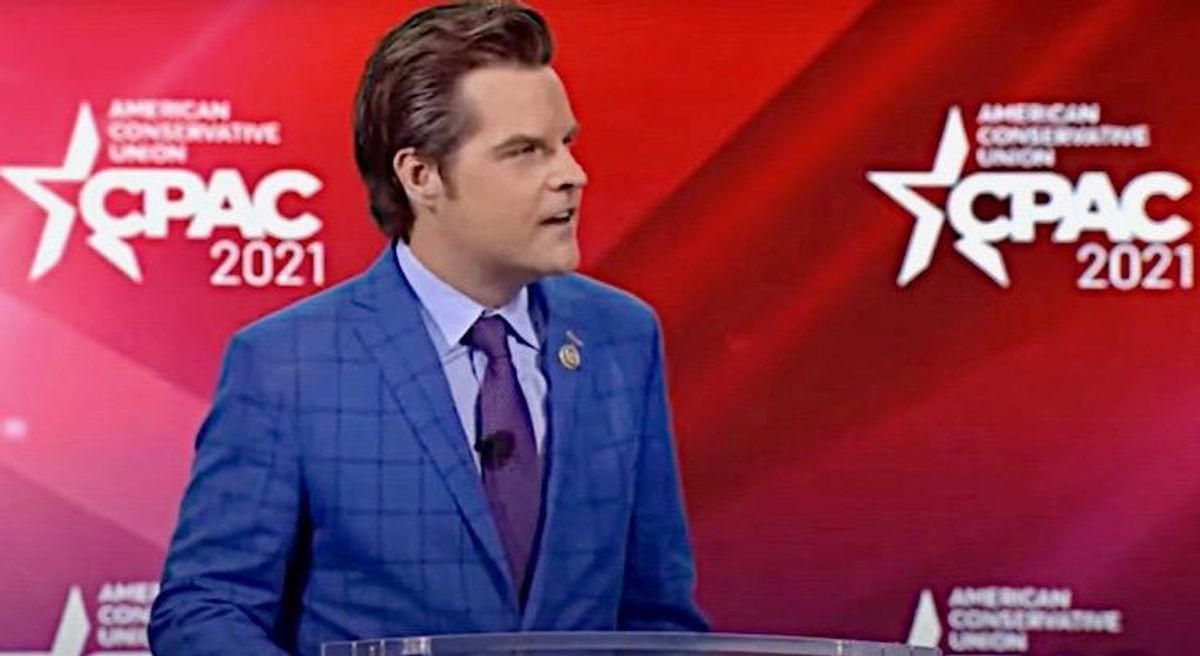 Former officials in President Donald Trump White House and the Republican Party were "gloating" Tuesday night when it was revealed that Rep. Matt Gaetz (R-FL) was being investigated by the Justice Department for possible sex trafficking, Business Insider reported.

Gaetz, who is the "subject" of an investigation, could end up being indicted if evidence is found of a crime. It's possible he could also be completely vindicated. But the latter didn't matter as Republicans joined with jubilation to celebrate what they thought was Gaetz's fall. One former senior Trump White House aide was on multiple text chains with former colleagues gossiping about the deluge of news about Gaetz's legal predicament.

A former congressional aide implied that Republican leaders wanted to get rid of him, but didn't want their hands on it.

"Republican leadership will likely watch him completely implode in a matter of days without having to do a thing," the former aide told BI. But if the leadership intends to remove Gaetz from any committees, there would need to be an actual indictment first.

"Good riddance," another former Trump White House aide celebrated. "It sounds like he let whatever BS power he thought he had go to his head and he thought himself above the law."

Gaetz continues to deny that he ever dated someone who was 17-years-old or traveled with a 17-year-old. Instead, he claimed that was some kind of extortion case that will vindicate him.

On Capitol Hill and in the campaign world, Business Insider explained that opinions of Gaetz are just as bad.

"The congressman is one of those that came to Washington to make an impression for fame and fortune rather than accomplishing anything in Washington for his constituents," a national Republican campaign consultant told BI. "Matt is going to have a popularity problem now, and may just fade into obscurity. No one will want to associate with him until there's a resolution — which probably won't be favorable."

"He's not in the legislative business. He's just out there to blow sh*t up and get on TV," said a Republican House staffer.

"National Republicans are concerned and are carefully monitoring the situation," said a senior GOP strategist.

But one former House staffer isn't so sure that Gaetz is completely done.

"They didn't believe he would be that stupid," the former staffer explained. The person did say, however, that Gaetz is known for being a "showboat" with few friends. "He's a blight on the conference."

Before the news broke on Tuesday, Gaetz teased that he might retire from Congress early. According to Axios, there was an offer to host a show at Newsmax.

Read the full piece at BI.