Trump went on to say that Paul "is a different kind of guy, but I like him a lot anyway, and I'm proud to have endorsed him when he ran."

"Do you think he learned his lesson?" Trump said.

As The Hill points out, Carey was a virtual unknown before Trump's endorsement. He beat out around a dozen other primary candidates eyeing the seat of GOP Rep. Steve Stivers, who retired to run the Ohio Chamber of Commerce.

Judge warns DOJ may have given Trump a shield against Jan. 6 lawsuits

A widely criticized opinion issued last year by the Department of Justice could shield Donald Trump from accountability for inciting the Jan. 6 insurrection.

The department decided to keep defending Trump in a rape defamation case filed by advice columnist E. Jean Carroll, arguing that he was a federal employee when he called his accuser a liar, and thus immune from lawsuits, and a divided appeals court agreed -- over the starkly worded objections of one panelist, reported The Daily Beast.

In West Texas, Fort Stockton’s solution to a teacher shortage is a motel

Every day after work, veteran English teacher Staci Ely pulls into the parking lot of the Spanish Trail Lodge in Fort Stockton, a small town in far West Texas.

She parks right in front of her door in the motor court-style hotel and settles into a small, recently refurbished room with an en suite bathroom, Saltillo tile floors, a mini fridge and Southwest-style fixtures.

The cozy motel room is home these days, and it’s one reason Ely took the job with the Fort Stockton Independent School District. That and the $80,000 salary.

In order to secure a livable retirement, Ely, 54, temporarily left the spacious home 500 miles away she built with her husband, a former professional bull-rider who stayed behind.

“He’s a cowboy, and he likes cowboyin’ at home,” Ely said of her husband. 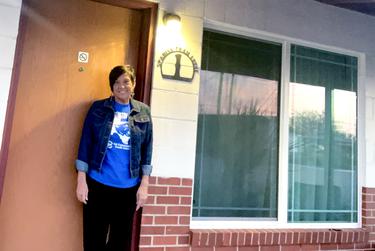 Staci Ely in front of her room at the district-owned Spanish Trail Lodge in Fort Stockton. Credit: Courtesy of Staci Ely

She rents her room for $250 a month from the Fort Stockton school district, which purchased the motel in December for $705,000 out of its budget, part of a multifaceted plan to recruit teachers amid a chronic shortage.

The plan also includes hefty salaries for the teaching positions the 2,200-student district needs the most.

The district’s teacher shortage, made all the worse by the COVID-19 pandemic, mirrors a reality seen in many parts of the country.

Lured by higher salaries and low-cost housing, the district has filled all of its critical positions, said Ember Renteria, its head of personnel. And it’s filled them with well-qualified teachers. “Normally we were just looking for anyone who was willing to teach,” she said. “There’s been a big difference this year. If you pay them, they will come.”

Zamora wasn’t in Fort Stockton when the pandemic started, but he has always worked in the kind of very small, rural district struggling to fill slots. After years of innovation and recruiting, the pandemic was a massive setback.

“Whatever ground we gained, we were losing,” Zamora said. The pivot to virtual learning and then again to hybrid learning pushed many teachers past their breaking point and out of the profession. When he looked at the staffing situation in Fort Stockton in 2021, he saw that as in most other rural districts, the pandemic had made another “hole in the bucket.”

He arrived in Fort Stockton in June 2021 and immediately got to work figuring out how to get more teachers into the district, and how to get the experienced teachers already on the payroll to transfer into positions like math, English and science that are hardest to fill.

For the eighth grade English teacher, this was a golden opportunity to stash away the $80,000 salary. The position is usually hard to fill because subjects that are covered by state exams are typically more stressful. But the bump in pay made it worth her while.

That’s exactly what Zamora was counting on. 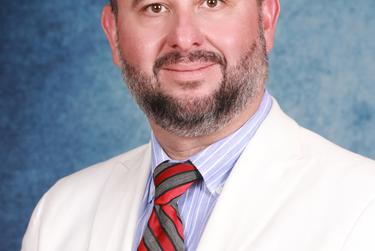 He’s no stranger to the disincentives facing the teaching profession. Starting salaries are too low to appeal to many college graduates, especially those carrying college debt. From there, most districts follow a set pay schedule based on years of experience. If a district follows the minimum pay scale, as many small, rural schools do, it takes a teacher 20 years to get to $54,000.

He looked at the funding he had available for his 180 teacher salaries this school year and found a way to pay them according to how much the district needed to fill the position. The average salary for Fort Stockton teachers in 2021-22 was $53,000 — the state average is around $56,000 — but now, for instance, a first-year teacher in a high school math class could make around $72,500. If a veteran teacher takes that position, they’ll make even more.

But even at $70,000, Zamora said, housing prices in Fort Stockton were another large hurdle. The housing stock is mostly single-family homes, many of them older. Oil companies drilling nearby offer relatively generous housing stipends to their workers. But with home appraisals on the rise, landlords are charging top dollar.

The district built 12 brick duplexes, similar to what one might see in a suburban development, complete with a playground in the shared, fenced yard behind them. Teachers can rent those for $750 to $800 a month.

That’s great for families, Zamora knew, but when the Spanish Trail Lodge came up for sale last December, he knew it would sweeten the deal for even more recruits. He was thinking of young teachers not ready for homeownership, as well as older teachers who aren’t necessarily looking to uproot their lives but need to be thinking about their financial future, like Ely.

Ely wasn’t permanently relocating 500 miles away. Her husband, six kids and four grandchildren are still back in Emory, a tiny, rural town east of Dallas.

But Ely knew she couldn’t end her career there, where the district was on the state minimum salary schedule, if she wanted to have a stable income in retirement.

It was a huge raise, but the Spanish Trail Lodge gave her the opportunity to take home even more by cutting out her biggest expense — a market-rate rental. “I didn’t want all of my raise to go to housing when we own a home,” she said.

In the 29 years she’s been teaching, Ely has made a lot of sacrifices. She’s driven 45 minutes to work each way. She’s worked for the state minimum teacher salary. She’s taken on extra classes when positions went unfilled. She’s been happy to do it, she said, because she loves her job and loves the middle school kids she teaches. 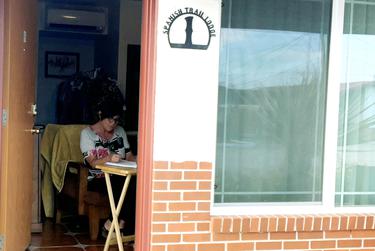 But now she has to think about her future. It feels almost sacrilegious to say so, Ely said, because teachers are trained and conditioned to be all about the kids. They are praised when they are, in a way, martyrs to the profession, she said. “I’ve done 29 years for the kids, and I have to start thinking about my retirement.”

She flies home to see her family when she can, but soon she’ll be able to take advantage of another perk; for the first time in her teaching career, Ely won’t have to work through the summer, either picking up summer school classes or a side gig. 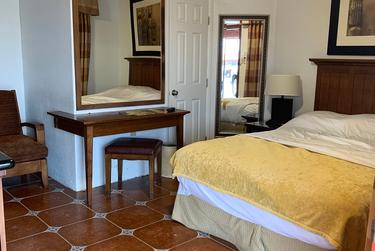 To house teachers recruited from across the state, Fort Stockton bought the Spanish Trail Lodge, where teachers pay $250 a month in rent. Credit: Bekah McNeel

The motel is great in the meantime, she said. In the center of the horseshoe-shaped motor court, there’s a freestanding house where the proprietor lived. The district turned it into a clubhouse of sorts, with a large kitchen, two living rooms with recliners and large flat-screen TVs, a workout room with new equipment, and a laundry room with washers and dryers.

One of the administrative assistants in Zamora’s office was in charge of making the clubhouse “homey,” Zamora said, nodding to the decorative vases, potted plants and other decor in the living rooms. “She really got into it.”

It’s not uncommon for rural districts to provide housing for teachers and administrators, Zamora said, but the hotel with its rock-bottom rent was something new. Not everyone in town has been happy about the district’s housing plans, Zamora said. Landlords have been able to charge $1,500 or more simply because of supply and demand. In a town of 8,000 people, it doesn’t take much to disrupt the market.

Fort Stockton High School Principal Ken Wallace had already paid the oil field premium once and wasn’t keen to do it again. Oil companies offer workers housing stipends high enough to drive rents well beyond what local residents are used to. He was coaching in a small Texas town when the market boomed and watched his rent triple within a year. When he moved to Fort Stockton for the principal’s job this year, he recognized what was happening with the housing market and opted for the Spanish Trail Lodge.

As the only school administrator in the motel, the district offered him a double room, since he would be something of an acting resident assistant on site — a link to district administration should anything go awry. But it’s not like rowdy college kids, he said — these hard-working professionals just want some peace and quiet when they get home.

“We’re all here and we see each other, but everyone kind of understands,” Wallace said. “We try not to step on each other.”

Wallace’s own retirement calculations include running Airbnb properties with his wife, who stayed behind in Goliad — 400 miles away — until the house they are renovating there was ready to start earning income. He wouldn’t have been able to take on another mortgage or an equally high rent.

“That’s the only reason we can swing it,” Wallace said. “It’s a total game-changer as far as being able to be housed.”

The 74 is a nonprofit, nonpartisan media organization focused on America’s schools, education policy and 74 million children.

This article originally appeared in The Texas Tribune at https://www.texastribune.org/2022/09/29/texas-teachers-shortage-fort-stockton-motel/.

Calling this summer's Independence Day parade massacre in Highland Park, Illinois "predictable and preventable," the families of three people who were killed joined several people who were injured in filing a lawsuit against several parties, including gun-maker Smith & Wesson, on Wednesday.