Supporters of Donald Trump were excited to see the start of his revenge tour against Republicans he deems insufficiently loyal as the Republican Party's civil war escalates.

By Friday morning, supporters of the former president were waiting in line for the Saturday night speech, WKYC-TV reports.

Trump intends to attack Republicans in his first campaign rally since leaving the White House the day Joe Biden was inaugurated.

"While Trump has made speeches at Republican events since his election defeat by Democratic President Joe Biden, the rally in a state he carried in the 2020 election marks a return to the kind of freewheeling mass gatherings that have been critical to retaining the support of his base," Reuters noted. "It also marks the start of his public events lashing out at elected Republicans who he views as having crossed him. He will campaign for former White House aide Max Miller, who has launched a primary challenge against Representative Anthony Gonzalez, one of the 10 House Republicans who voted to impeach Trump on a charge of inciting the Jan. 6 attack on the Capitol by his supporters that left five dead including a Capitol Police officer."

CNN's Donie O'Sullivan posted pictures from the event, with one photo showing a short bus with a "Q sent me" banner supporting the QAnon conspiracy theory.

Another picture showed a white minivan with the debunked conspiracy theory that "Trump won" painted on the bumper. The van also featured bumper stickers reading, "Joe and the hoe have to go" and "Resist like it's 1776."

The 1776 sticker is a reference to the American Revolution, which was a rallying cry of those trying to overturn the results of the 2020 election during Trump's January 6th insurrection.

As Twitter user Schooley noted, the white minivan has license plates showing it is registered in McMinn County in southeast Tennessee. Google shows it is over a 500 mile drive from the county seat, Athens, to the rally in Wellington, OH. 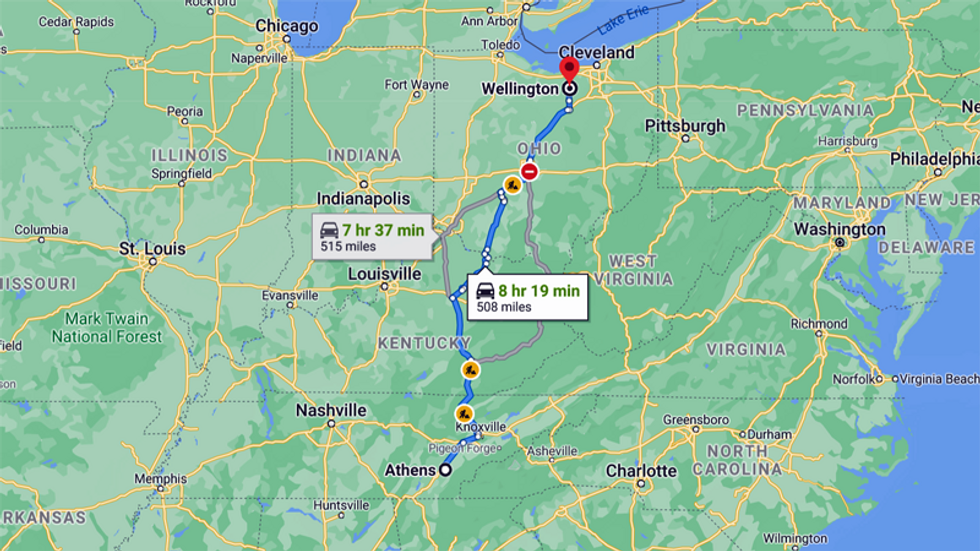 The lie that "Trump won" is a theme of the rally.