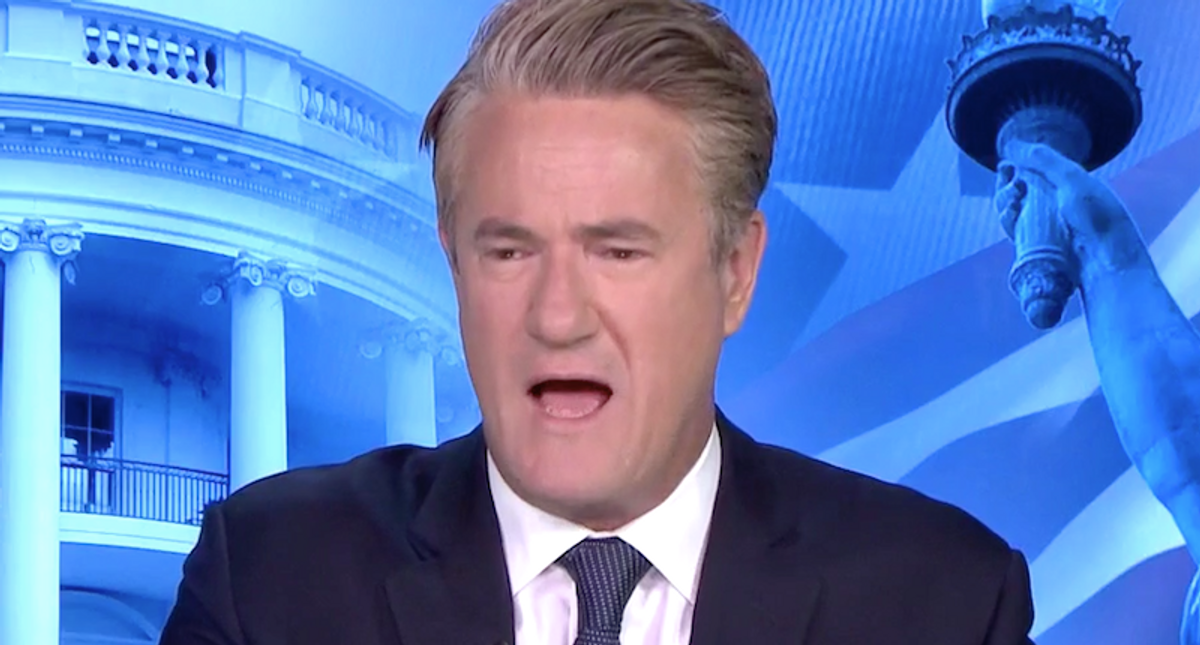 MSNBC's Joe Scarborough barreled through a producer's commands as he ranted about Donald Trump ensnaring his relatives and longtime friends in a cult.

The "Morning Joe" host pondered how childhood friends and other loved ones he still trusts to do almost anything to help him would blindly follow a former president who repeatedly slurred him as a murderer, and Scarborough wondered how this could have happened.

Scarborough insisted the issue wasn't about his own personal feelings about Trump's insults, but about his friends' reaction to those slurs.

"This isn't about Donald Trump calling me a murderer, this is about me talking to my friends and them having this massive disconnect and not understanding if a president had called them a murderer and said they should be thrown in jail and then, of course, capital punishment, all that, I would have been the first to rush up there," he said. "We would have all rushed up there. This is so bizarre and beyond. So they knew that was a lie, right, and if he was going to lie in such a grand way about something as crazy as that --"

A producer apparently asked Scarborough to hand off the segment to co-host Willie Geist before heading into another segment, but the host ignored the command.

"I'll get to Willie when I want to get to Willie," Scarborough said. "I see him. I'll get to him when I feel like it. I'll go to Willie when I feel like it. So if he's going to lie about that, Willie, what the hell won't he lie about? Then we get to the things that matter -- the vaccine. Like, why won't he come out and tell them people are lying about the vaccine? Why won't he be aggressive on the front lines? The election, which is what we're talking about now. Why does he keep lying about the election? Why does he keep lying about the insurrection? He was the guy who inspired it."

Despite all that, Scarborough said not one Trump voter -- including his friends and family -- has changed their minds since the election.

"If the election were held today, Donald Trump would get 75 million votes," Scarborough said. "He hasn't lost a single vote, and, yes, you can give me all -- you can say, oh, my cousin, my cousin in Scranton is not voting for him next time. No, he would get the 75 million. I don't know a single person who has changed their mind. Certainly not enough people. You look at these polls, he dominates the Republican Party even more, and, of course they're going to keep losing elections. They may win in 2022 for obvious reasons, but national elections are done as a national party. This isn't about politics. This is about me looking back over the past 50 years and realizing that almost everybody that I grew up with, everybody that I loved then and love now live by a different set of realities when it comes to politics."