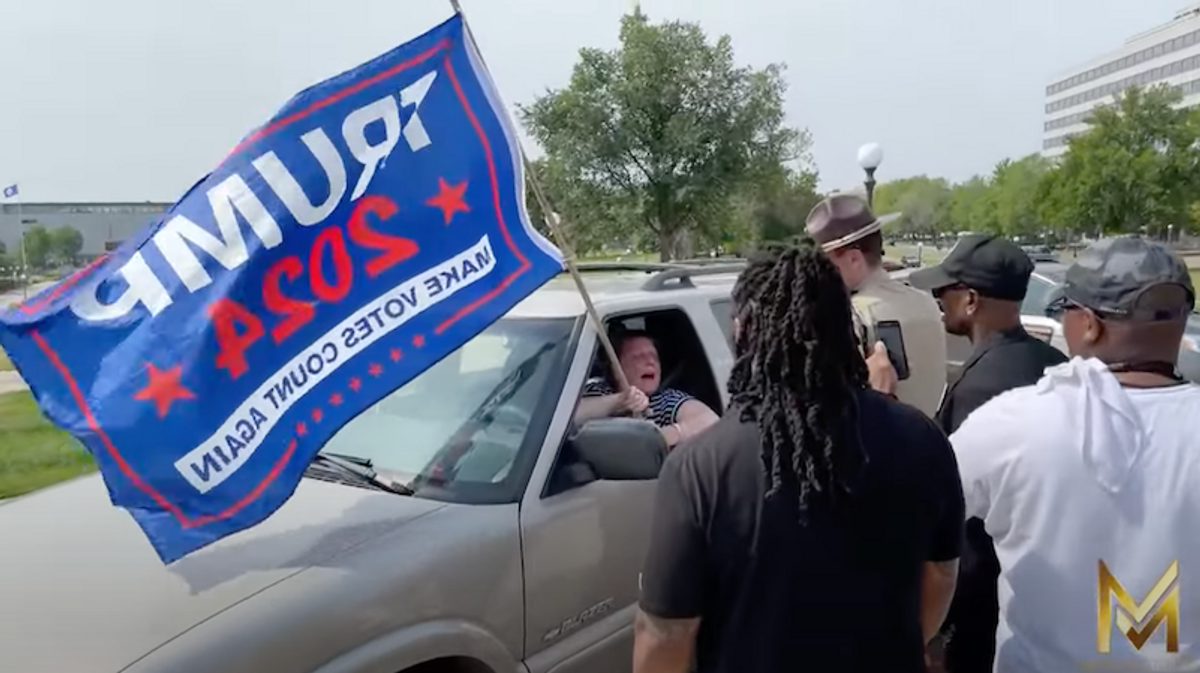 Wild scene at the Minnesota State Capitol as a woman drives her vehicle onto the south mall, waiving a Trump flag.… https://t.co/xGUGwyoCv0
— Theo Keith (@Theo Keith) 1627315695.0

The incident could be seen in a live stream from the news conference.

When the woman drives up into a restricted area on a sidewalk in her Chevy SUV, attendees at the news conference confront her at the bottom of the Capitol steps, according to the video. After one of the attendees tries to take the woman's Trump flag, she begins to honk the horn. When a police officer arrives, the attendees tell him, "Please get her out of here. I'm afraid for my life."

Instead of arresting the woman, the police appear to allow her to leave. She drives off before swerving through the Capitol lawn. Finally, police pull her over on a nearby street.

"I didn't know you could drive onto the Capitol steps, do a couple of donuts, and then leave," the narrator says in the video.

The video shows the woman pulled over, with unmarked police cars blocking her in, and officers talking to her.

A Black man asks one of the officers why she hasn't been arrested.

"What she did to us over there was extremely dangerous," the Black man says. "She could have ran us over. If she was anything other than a blond-haired white woman, she wouldn't be having that conversation right now. She is dangerous."

The person recording the video then returns to the press conference for several minutes, before coming back to where the woman is pulled over. The woman is still in her car, apparently talking to a mental health worker. She can be seen smoking a cigarette and holding a Bible.

"If she has mental health issues, which she probably does, this same treatment needs to be spread across the board for everybody, no matter their race or color," one Black bystander says. "They come at the car with us with guns drawn, ready for whatever, not ready to talk and listen like they did for her."

More than an hour after the initial incident, police finally helped the woman out of her car, without handcuffs, and into the back of an unmarked police car. "White privilege!" one bystander can be heard yelling.