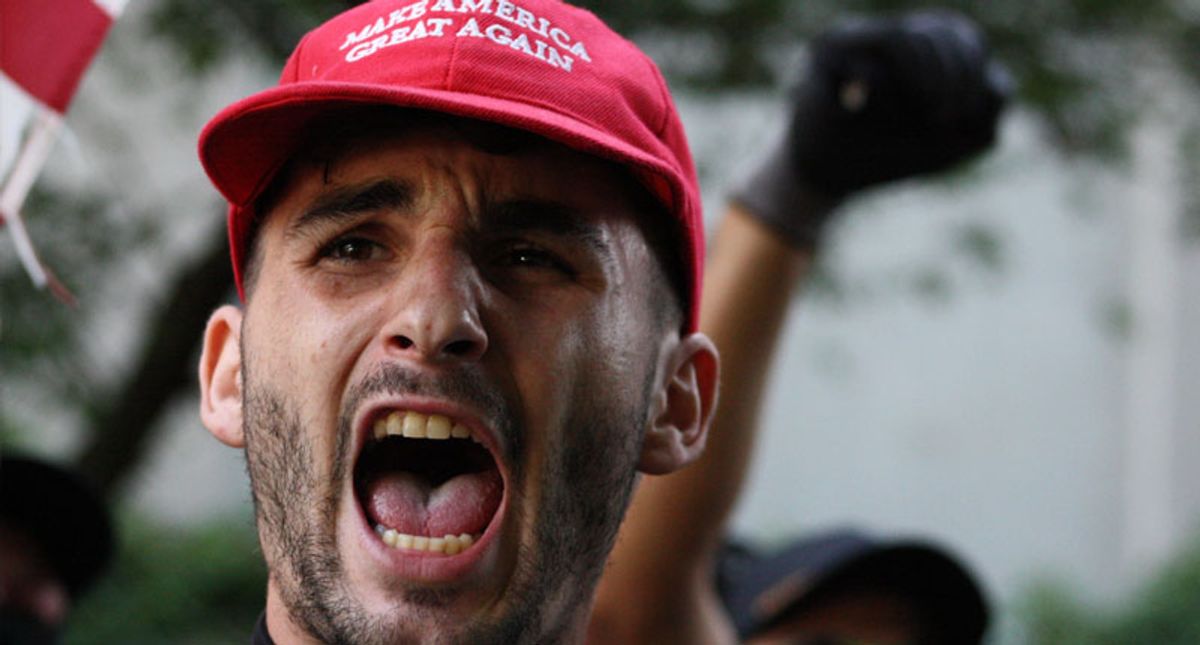 Trump supporter at a "Back the Blue" rally in Oregon on August 22, 2020. (Robert P. Alvarez / Shutterstock.com)

Now that Donald Trump is out of office, his most loyal supporters can't decide whether they're anti-government insurrectionists or victims of liberal overreach.

A handful of the former president's loyalists showed up at the Louisiana capitol in Baton Rouge to protest Joe Biden's inauguration and, hopefully, share their misery with others who believed that somehow Trump would find a way to remain in office despite losing the election, reported Voice of America.

"He kept fighting for us, he never gave up on us and we shouldn't give up on him," said James Kent, decked out in Trump campaign paraphernalia and carrying a sidearm. "I want my voice to be heard. ... I spend all this time talking about my First Amendment rights, and I figured it was time I start using them."

Kent was disappointed to find only one other protester, although others trickled in, but never more than two or three at a time despite the mild January weather.

"I wanted to come out here and make noise with some people," Kent said. "I guess I missed everyone."

Police set up metal barricades and stationed officers around the statehouse to guard against violent threats in the wake of the Jan. 6 riot by Trump supporters at the U.S. Capitol, but the Inauguration Day protesters resented the attention from law enforcement.

"They can't keep me from protesting," said Trump supporter Tom Deel, pointing at nearby police cars. "'We the People' pay for them to be out here and I'm not afraid of them. I guess that makes me a proud insurrectionist now."

Kent and Deel bonded over their shared belief that the coronavirus threat was exaggerated to build up support for mail-in ballots in an overarching plot to deny Trump a second term, but Kent said he felt more complaining than overthrowing the government.

"It's like liberals want to crucify anyone they know is a Trump supporter," Kent said. "I'm here because I want to show people I still have a voice. All I can do is b*tch and moan at the moment, so that's what I'm going to do."

But that's not to say he won't fight back if the opportunity presented itself.

"Unless someone from the other side knocks off my hat or something," Kent said. "Then there might be some violence."