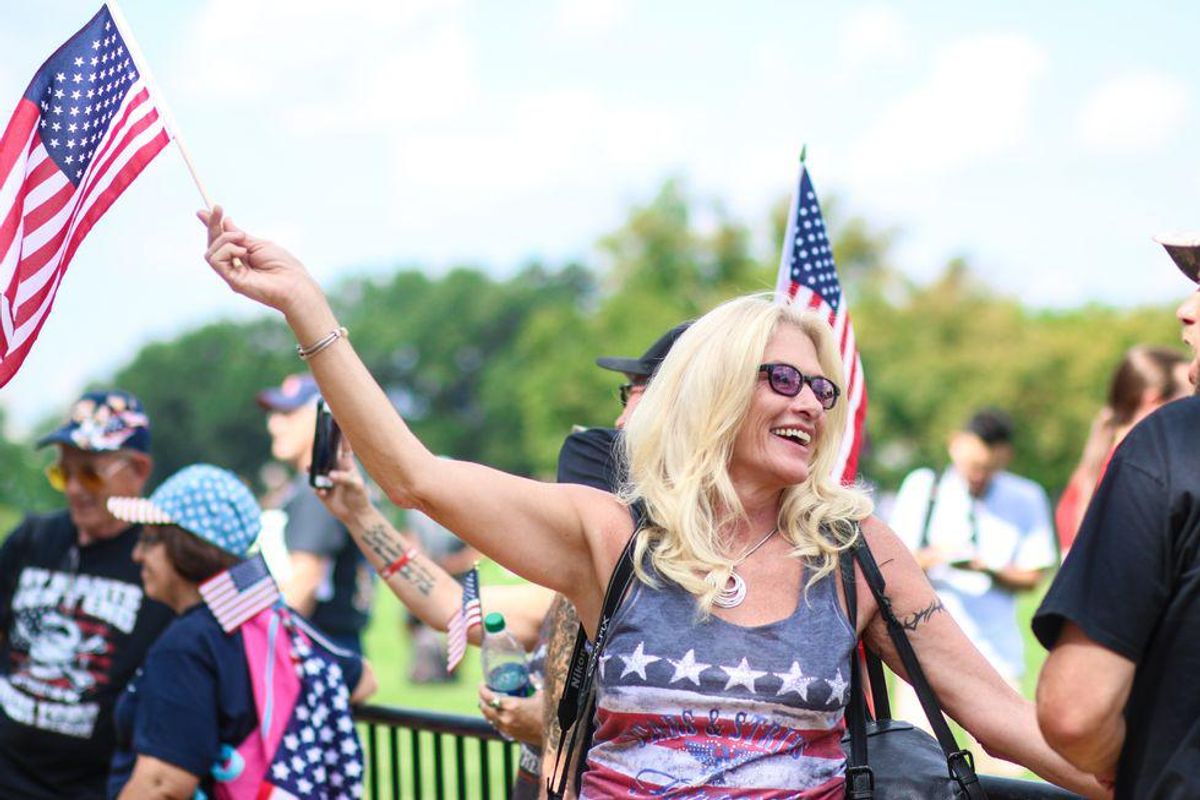 Washington, DC - September 16, 2017: A Trump supporter waves the American flag during a rally in support of President Donald Trump, deemed the "Mother of all Rallies" (MOAR).

Attendees at a sparsely-attended pro-Donald Trump rally in Morning View, Kentucky expressed dismay that the former president lost the 2020 election -- with many saying it was stolen -- and now claim they feel like "outcasts" in their own country.

On Saturday former lawyer Eric Deters held the rally to support Trump despite the fact that the rest of the country was somberly observing the 20th anniversary of the 9/11 attacks, reports the Cincinnati Enquirer

The report notes that, "It was the first Freedom Fest, something he [Deters] told the crowd he wants to hold annually on his 138-acre farm in the rural outpost of Morning View, Ky., just south of Independence," and Saturday's event featured Kimberly Guilfoyle, a former Fox News personality who is now dating Donald Trump Jr., and current Fox News personality Tomi Lahren.

According to the Enquirer's Scott Wartman, "People came from all over the region, as far away as Batavia and Fairfield, united in their fealty to Trump, distrust of the COVID-19 vaccines and belief in the debunked myths surrounding the 2020 election and Trump's discredited claims of a stolen election," with Wartman adding the caveat , "No evidence exists of widespread voter fraud."

The report notes that attendees are still bitter over the loss, with one man stating that he feels their voices are not being heard and they have been shunted aside.

"We're the outcasts of the country these days," explained 57-year-old Bill Albright as he and his girlfriend, Kathi Brinegar, waved flags that read, "2020 was rigged", "Unmasked, unmuzzled, unvaccinated, unafraid," and "Joe Biden sucks."

Another attendee, Dwayne Turner, 51, of Goshen, admitted he was in Washington D.C, for the "Stop the Steal" rally where he claims he was providing security.

"I was right on the steps," Turner said of the Capitol insurrection. "They made it out more than what it really was. The mainstream media has made it out to be an insurrection, to me it was a few people who were pissed off."

Shari Reynolds and her husband Patrick, of Deer Park, told the Enquirer they still believe the election was stolen from Trump.

"So then where do they get their information?" Wartman asked. "

"I don't have any news sources," Patrick Reynolds replied with his wife adding, "Just research."

"They do see news stories," Wartman wrote before adding that Patrick Reynolds told him but "you have to research the information."