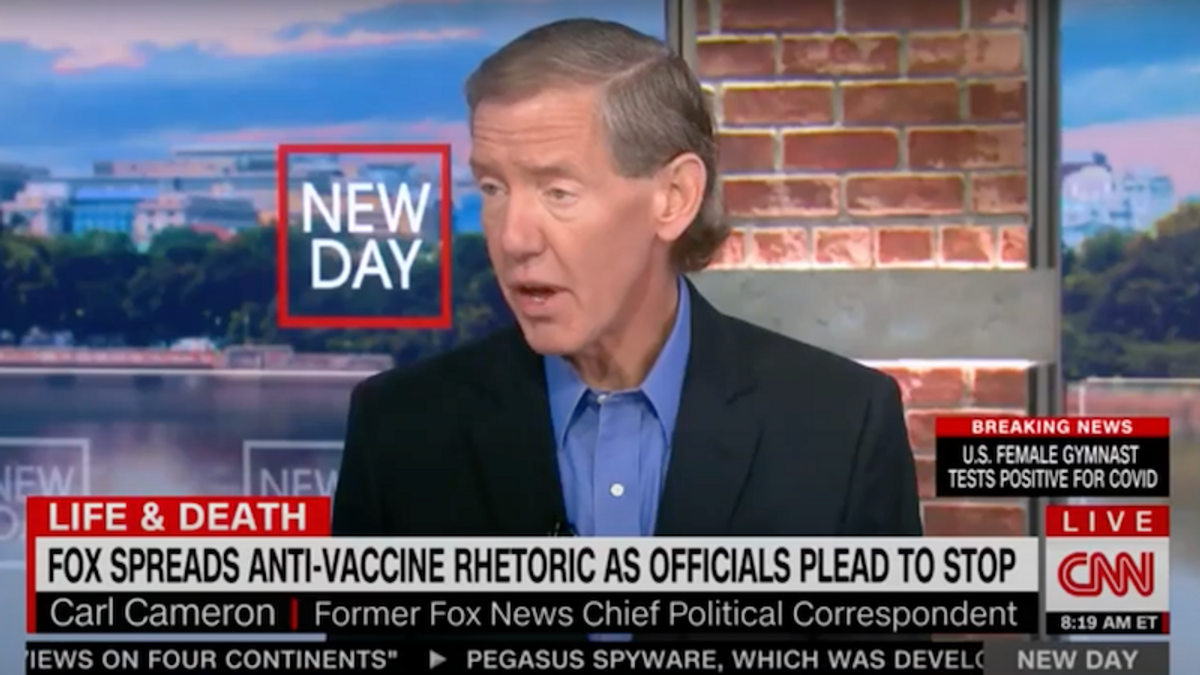 Carl Cameron during an appearance on CNN. (Screenshot)

Carl Cameron, a former senior political correspondent at Fox News, blasted host Tucker Carlson and other "talking heads" at the network for promoting anti-vaccine conspiracy theories in the name of profit.

"It's about ratings, and ratings ultimately become revenue, and that's the name of the game," Cameron explained during an appearance on CNN's New Day on Monday morning. "That type of activity is not journalism. It's not news. It's gaslighting. It's propaganda."

"It is the opinion hosts who aren't journalists per se, they're talking heads, and their job, their reward is bringing eyeballs on television, and all they really have to do is keep people watching until it's commercial time, and then it's ka-ching ka-ching ka-ching for the networks. It works really well in primetime, but it's not news."

But Cameron went on to say that it's ultimately a bad business model because Fox News and other networks are effectively killing their own viewers.

"It makes no sense whatsoever," he said. "This is literally the metaphor of the lemmings running to their own slaughter."

Cameron also called for anyone discussing vaccines on TV to disclose their own vaccine status — which neither Carlson nor fellow Fox News host Laura Ingraham has done.

"The hypocrisy of it and the danger of that potential falsehood is exactly the kind of deceit Trump started even before he was elected," Cameron said.

He said the solution is for people to have conversations with their loved ones who may be vaccine-hesitant, but from a place of empathy.

"People have been disillusioned and people have been gaslit, and they don't understand it," Cameron said. "It's not their fault that they listened to their president."

DEL RIO — Nerio stepped out of the Rio Grande with his wife last week, put his feet on the sandy Texas ground and quickly found himself in handcuffs.

Gosar, who has referred to the Jan. 6 rioters as "peaceful patriots," is among those who've attempted to martyrize Babbitt — demanding to know the identity of the officer who fatally shot her as she attempted to crawl through a broken window outside the Speakers Lobby.

Families spent around $350 to send their children to the "funtastic" camp in the Blue Ridge Mountains, where they could hike, swim, zipline and be served a "healthy portion of God's word" -- but public officials have traced at least 76 COVID-19 cases nationwide back to The Wilds, reported The Daily Beast.