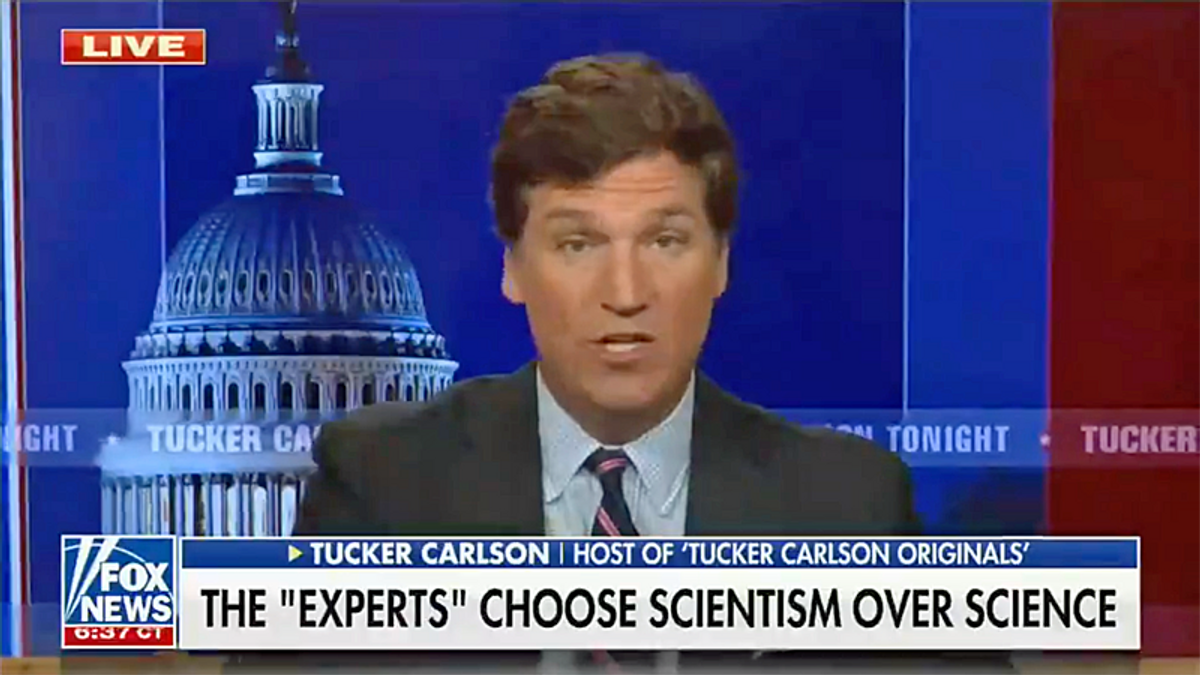 After a year of Fox News pushing debunked conspiracy theories about masks and vaccines, host Tucker Carlson is complaining about the backlash against people who are still refusing to get vaccinated.

More than 70 percent of eligible Americans have received at least one dose of a COVID-19 vaccine -- but many vaccinated people have been lashing out at the unvaccinated, whom they say are causing hospital shortages in red states.

In response, the anti-vaxxers have complained about being ostracized for helping the pandemic spread.

On Thursday night, Carlson likened the backlash against anti-science conservatives to lynchings.

"Unfortunately, the entire country is being manipulated by highly clever, ruthless people who are harnessing the worst qualities in human nature," the Fox personality said, alleging some grand conspiracy.

"You know, lynchings have happened throughout history — not just simply in this country, but in all countries — because there's something in people that wants to turn on the unpopular kid and beat him to death — that's like, who we are, it's the ugliest part of who we are," said the Fox host, perhaps revealing more about his bullying nature than the mindset of scientists promoting public health measures to save lives.

"And if you have ruthless leaders who are willing to exploit that for their own gain — and we do — then they end up turning the population against itself," said the infamously divisive Fox News personality.

"Vaccinated, unvaccinated — white, Black. These divisions, which we didn't recognize a year ago are now defining our lives," he said, apparently denying there were racial divisions in America prior to the pandemic.

"And we're being used. I mean, that's the truth, if you want to subdue people, divide them and that's exactly what they're doing," Carlson said, in a way that once again may have revealed more about his own approach to government and public health measures.

Democratic congressional leaders on Monday unveiled plans to suspend the nation's borrowing limit, following a White House warning of "economic catastrophe" unless that ceiling is raised.

The legislation also would fund the government through the end of the year after the current budget lapses on September 30.