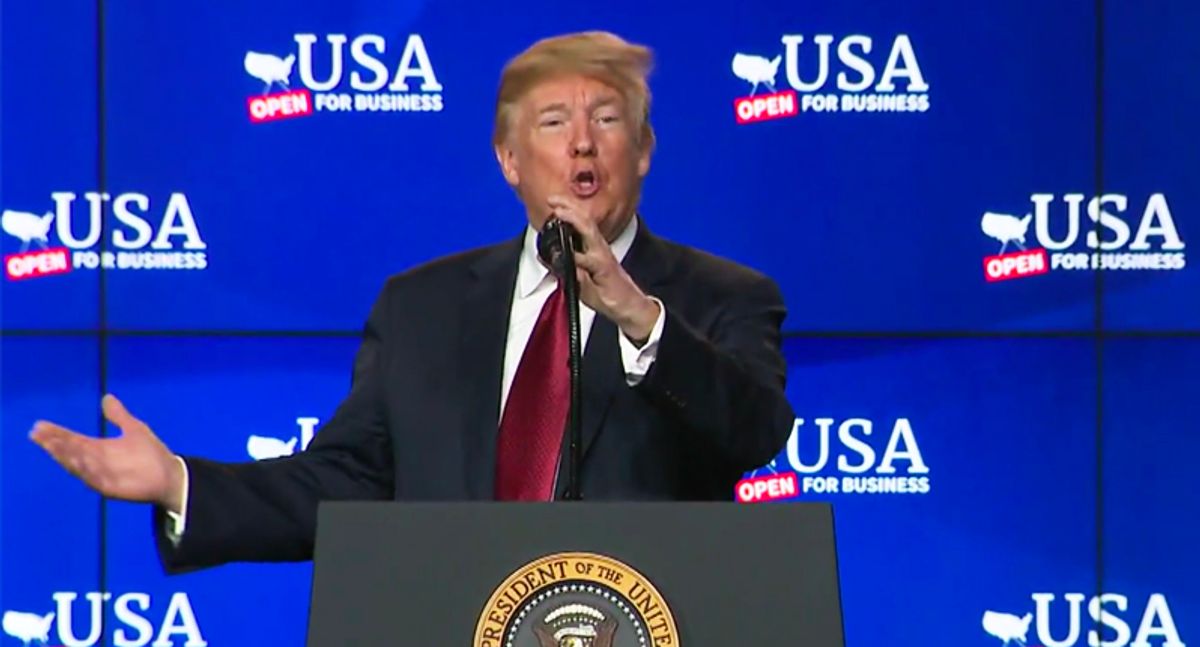 Even people sympathetic to Donald Trump are fed up with his supporters' barbarous anti-Semitic conduct at his behest.

Wisconsin Supreme Court Chief Justice Patience Roggensack issued an extraordinary Christmas Day statement condemning threats received by colleagues who were part of a 4-3 majority rejecting the latest desperate lawsuit from Trump's Keystone Cops legal team. And Roggensack, a conservative, was one of the three justices outvoted in the case.

It was reported first in the Wisconsin State Journal:

"'I acknowledge that all members of the public have the constitutional right to speak in criticism of public servants, which certainly includes all justices of the Wisconsin Supreme Court,' said Roggensack, one of the court's four conservatives. 'However, no justice should be threatened or intimidated based on his or her religious beliefs.'

"The statement comes days after President Donald Trump took to Twitter Monday to criticize conservative state Supreme Court Justice Brian Hagedorn for rejecting another one of Trump's efforts to overturn election results in Wisconsin. Hagedorn joined the three liberal members of the court saying challenges to the established election rules should have come before the polls closed."

The Journal reported that Roggensack's statement "also comes on the heels of misogynistic and anti-Semitic comments made toward state Supreme Court Justices Jill Karofsky and Rebecca Dallet, two of the court's three liberal members, in the days after they also voted against Trump's attempts to toss out hundreds of thousands of Wisconsin voters' ballots, according to the Times of Israel."

Here's more of that Times of Israel reporting:

"One commenter said Justice Jill Karofsky was 'hooked-nosed' and posted a corresponding anti-Semitic caricature of her. Another called her a 'terrorist' and said she should 'have a massive fatal heart attack on live TV.'"

"Her colleague Rebecca Dallet was called a "traitor" by a Facebook commenter, who also warned the justice that "the best case scenario for you is that you actually get a trial. When the people rise up that won't happen.


"The Daily Stormer, a neo-Nazi publication, published an article about the two judges on Sunday, calling them "an elite Jew sitting next to another Jew determining the course of our government." Karofsky was a target of Trump's Twitter ire earlier this year as well, when he baselessly claimed her election to the court was fraudulent.

"A campaign consultant for the justices who shared those posts and others with the Jewish Telegraphic Agency said they have received dozens of messages with obscene language in the days since the case was argued and decided in court. The court rejected the lawsuit in a 4-3 decision Monday — the same day that the Electoral College affirmed Joe Biden's victory in the November election.

"Karofsky and Dallet declined to speak with JTA, but the campaign consultant, Sachin Chheda, said both are concerned for their safety and have been in touch with law enforcement.

"'The volume and intensity of the feedback they're getting has hit a new level,'" Chheda said. 'It is more vile, it is more racist, it is more gendered, it is more threatening than what we have seen in the past.


"Both justices, who are seen as part of the court's liberal minority, had lambasted the arguments made in court by Trump's lawyer, Jim Troupis, on Saturday. The suit had asked the court to throw out 221,000 early and absentee votes in Dane and Milwaukee counties, which are Democratic strongholds with large non-white populations.

"Karofsky told Troupis that the lawsuit was 'un-American" and 'smacks of racism.'"

"'What you want is for us to overturn this election so that your king can stay in power," Karofsky said, according to The Associated Press. 'I do not know how you can come before this court and possibly ask for a remedy that is unheard of in US history.'"