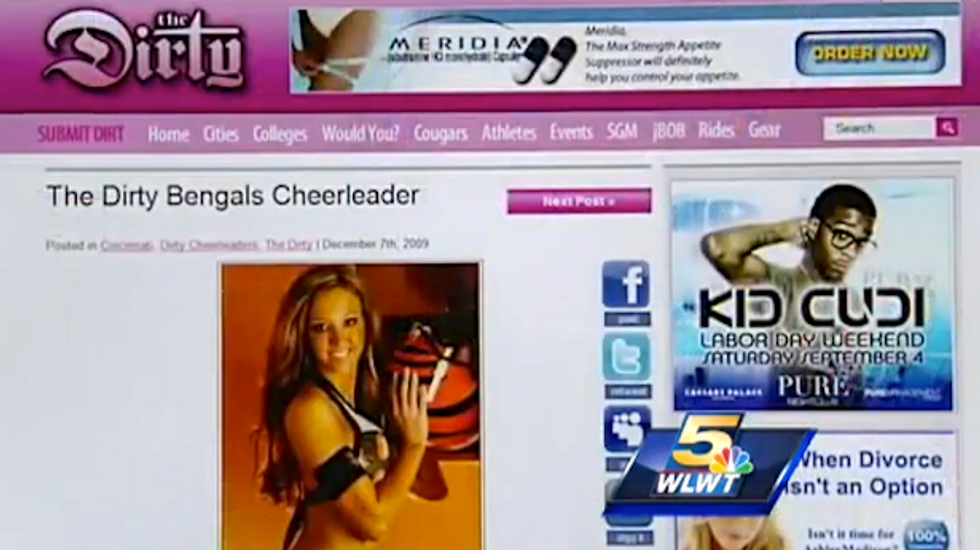 The world’s biggest tech companies have filed court briefs recently supporting the appeal of a gossip website owner who was successfully sued by a former NFL cheerleader and teacher convicted of having sex with a teenage student.

Companies such as Amazon, Facebook, Google, Microsoft and Twitter signed on to briefs filed Nov. 19 with the 6th District Court of Appeals in Cincinnati warning that the ruling had the potential to "significantly chill online speech" and uncut a 1996 federal law that offers broad immunity to websites.

Former Cincinnati Bengals cheerleader Sarah Jones filed suit in December 2009 against Nik Richie, who operates TheDirty.com, which allows users to anonymously submit posts that pick apart the physical appearance or sexual habits of anyone – whether they’re a celebrity or not.

Richie screens each post, makes editorial decisions and often adds his own comments, but he argues that he’s not responsible for verifying the accuracy of the claims.

A jury awarded the 28-year-old Jones $338,000 in damages after finding that Richie had acted with malice or reckless disregard for the truth when posting two anonymous items in 2009 claiming that Jones had sex with every Bengals player and probably had two sexually transmitted diseases.

She had previously been awarded $11 million in damages in a default judgment after the website operator failed to respond to the original suit, but a court later determined that Jones had sued the wrong, but similarly named, company.

Her attorney amended the complaint to direct it toward the proper company, and in the meantime, Jones pleaded guilty to sexual misconduct and custodial interference in connection with her relationship with a former student.

Jones resigned in late 2011 from the Bengals cheerleading squad and as a teacher at Simon Kenton High School after investigation began in the sexual misconduct case.

Jones’ first defamation trial against thedirty.com ended in January with a hung jury, then she got engaged to the former student from her criminal case, and a second trial ended July 11 in her favor.

Richie’s attorney has filed an appeal that argues federal Judge William Bertelsman should never have allowed the defamation case to go forward, which would nullify the jury’s verdict.

"If websites are subject to liability for failing to remove third-party content whenever someone objects, they will be subject to the 'heckler's veto,' giving anyone who complains unfettered power to censor speech," argues First Amendment lawyer Jack Greiner in briefs filed on behalf of multiple Internet companies.

Greiner argued that the law was clear.

“You're either a content provider or you’re not; you either wrote the offensive content or you didn't. And if you wrote it, you could be liable; if you didn't, you can't be liable," Greiner said. "This ruling, we think and what we're arguing in our brief, is that it blurs those lines."

The ACLU, Buzzfeed, CNN, eBay, Gawker, LinkedIn, Tumblr, Yahoo and Yelp were among the companies or organizations that signed onto Greiner’s brief.

"It could have the effect that a website operator just won't take comments so there will be less speech, less dialogue, sometimes called a chilling affect," he said.

Richie’s attorney, David Gingras, said the prominence of the companies concerned about the ruling "really tell you how major of an issue this is."

The federal Communications Decency Act provides immunity from liability to websites for content posted by their users and helps encourage growth and freedom of speech online, and judges and appeals courts have upheld the law in hundreds of cases.

Oral arguments are expected to begin early next year, with a decision expected in the summer.

Internet law experts say Bertelsman’s ruling is based on his own personal dislike for thedirty.com and not on legal precedent.

"Some people made some really terrible comments frankly -- they're vulgar and completely inappropriate -- and they made them on TheDirty.com," Greiner said. “(But) thedirty.com didn't make the offensive statements. It’s the people who uploaded to thedirty.com."

Bertelsman ruled four times in the case against arguments over the Communications Decency Act, finding that the site’s name, Richie’s management of the site and the personal comments Richie adds all encourage offensive content.

Watch this video report about the case posted online by WLWT-TV: