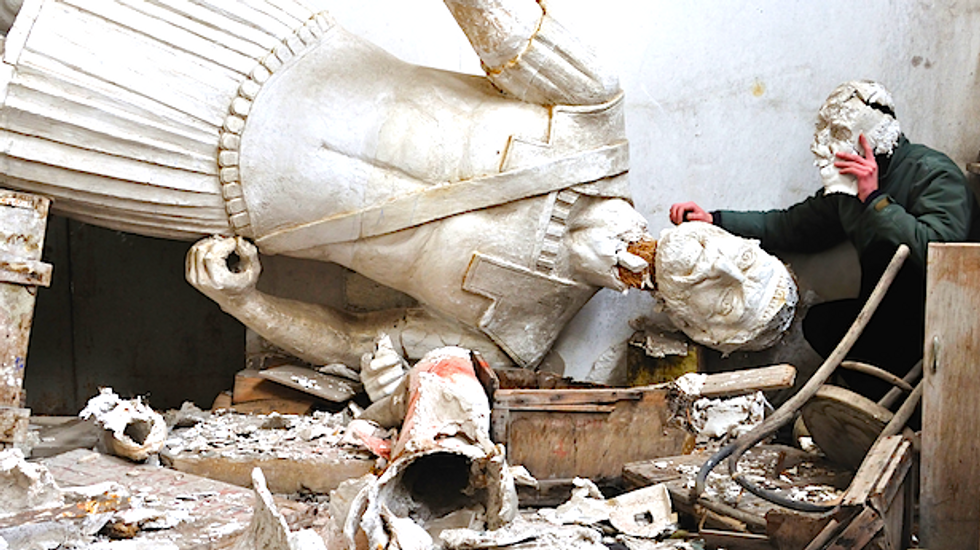 Rapid technological advancement is leaving many Americans behind, said a pair of digital business professors, which could create a dystopian nightmare.

Erik Brynjolfsson and Andrew McAfee, of the Massachusetts Institute of Technology’s Sloan School of Management, said Monday on the Bryan Callen podcast that technology is responsible for much of the extreme concentration of wealth that’s taken place in recent years.

“It turns out there’s no economic law that says everybody is going to share equally when technology brings some of these wonders to the planet,” Brynjolfsson said. “It’s quite possible for some people, even possible for a majority of people, to be made worse off in absolute terms.”

That hasn’t been the case over the last two centuries, when industrial growth tended to boost wealth and living conditions for large numbers of people.

“For the last 15-plus years, there has been this decoupling – I call it the ‘great decoupling’ – of ever-faster technological progress of productivity on one hand and the average worker, the median worker, being left behind,” Brynjolfsson said. “We trace that to the inability of people’s skills, organizations, (and) institutions to keep up with ever-faster technological growth.”

This relentless technological advancement will make it difficult for many people to earn what McAfee called “a good, old-fashioned living.”

“Then again,” Callen interjected, “you also talk about how it doesn’t take a whole lot of effort to produce a whole lot for a lot of people, so it could be we just create this leisure class, and I’d like to sign up for that. I want to swill wine and wear tweed jackets and lie about celebrities.”

But creating the sort of stratified, hereditary society depicted on “Downton Abbey” carries the risk of unintended consequences, McAffee said.

“We better make sure we’re preparing our society and preparing people for that kind of leisure class, if that’s what where we think we’re headed,” McAffee said. “What happens today, when work leaves a community, unfortunately, we don’t see people have these enlightened lives and debating philosophy and democracy and all of that. These communities are really hurting in a lot of ways, and we need to do better.”

Both agreed that unemployment was not the same as leisure, saying work helped give a person dignity before sketching out possible dystopian scenarios.

“It’s quite possible to let technology run on autopilot, and you get more and more concentration of wealth, and you get not the 1 percent, but the one-hundredth of 1 percent or less, really controlling all the wealth, all the assets, the superstars, and when you have software eating an industry, it does tend to create a winner-take-all market, and left to its own devices, you end up having a lot of other people not participating in that,” Brynjolfsson said.

However, he said, the future offered the possibility of a “digital Athens,” where robot slaves provide the leisure class with food, clothing, and other basic necessities.

“I think science fiction provides both extremes for us,” McAffee agreed. “My happy vision for the future is something like ‘Star Trek,’ where we go around and boldly explore new worlds, and I never heard anyone on ‘Star Trek’ complain about their paycheck, their meals come out of some machine, they entertain themselves on the holodeck, you know, the probably take care of all the needs that you just identified on the holodeck, I don’t know.”

“My dystopian vision is something like the science fiction movie ‘Elysium’ that came out last year, where literally the ultra-wealthy take themselves off the surface of the planet and build these beautiful rings worlds while the rest of humanity is kind of miserable and fighting it out down there,” he continued.

Listen to their discussion posted online by Bryan Callen: