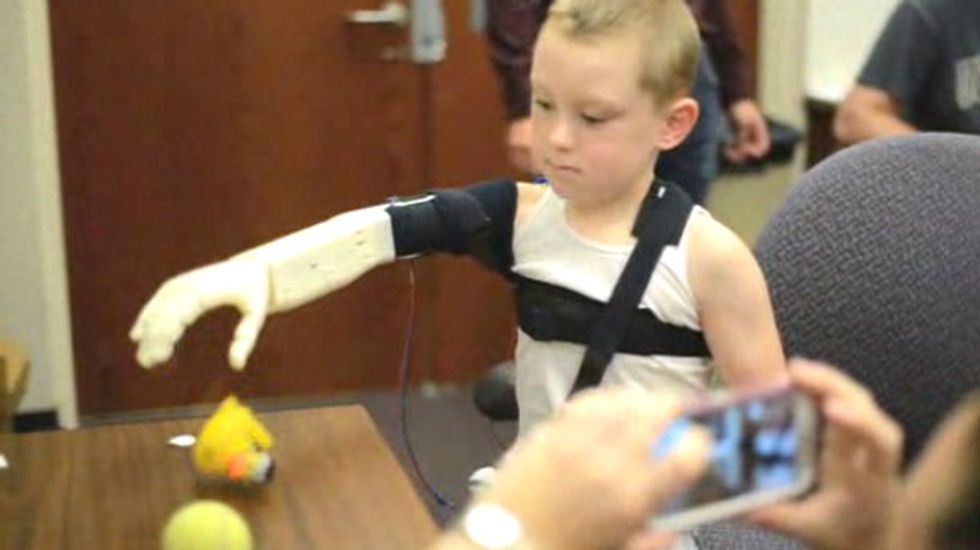 A team of engineering students from Florida banded together and built a working 'bionic' arm for a 6-year-old boy using a 3-D printer and less than $350 worth of materials purchased online, according to the Sun Sentinel.

Alex Pring of Grovelenad, Florida, was born without a right arm and his family's insurance wouldn't pay for a prosthetic arm since they cost $40,000 and children grow out of them.

Enter a group of college students from the University of Central Florida's aerospace engineering program, led by student Albert Manero.

With the boy's family unable to pay for an arm out-of pocket -- his mother, Alyson Pring, works as a food server, and his father, Steven, drives a truck -- they turned to volunteer online network e-NABLE, an international group of volunteer engineers, 3-D enthusiasts, and occupational therapists, who put them in touch with Manero.

"We asked them if they could help us get a little hand to put on the end of his arm," said Alyson Pring. "But Albert said, 'Oh, no. We can do way better.'"

Eight weeks later, with the help of designs and building instructions downloaded from the Internet, a 3-D printer, and less than $350 worth of gears and batteries purchased online, young Alex Pring has a working arm and hand that allows him to pick up items by merely flexing his arm.

"Alex flexes his muscle and he can use that to open and close his hand," said Mateo Alvarez, 21, an aerospace engineering senior who came up with the idea of using the boy's upper arm muscle to control movement. "We went through a lot of different ideas."

Manero, a Fulbright Scholar with a bachelor's and master's degrees in aerospace engineering , now pursuing his Ph.D. in mechanical engineering, explained that prosthetics for children are more difficult to make than for adults because the components are so much smaller.

Six weeks after Alyson Pring's call, the team presented Alex with a prototype arm complete with elbow and wrist.

"He picked up how to open and close his new hand within minutes," said Manero of the first trial run.

According to Alex's mother his next move was to hug her with  two arms.

This week Alex was presented with a finished arm and demonstrated it for photographers, picking up a rubber duck, and then a foam football, which he then threw at the nearest person.

As Alex grows, the team can create a new arm by using the 3-D printer to make another, larger copy, said Manero. Materials will cost about $20.

"I wanted an arm so people would stop calling my arm names," said Alex. "It hurts all my feelings. Everyone is born different. Everyone is special for what they do."

Watch video below, provided to the Sun Sentinel by the University of Central Florida: