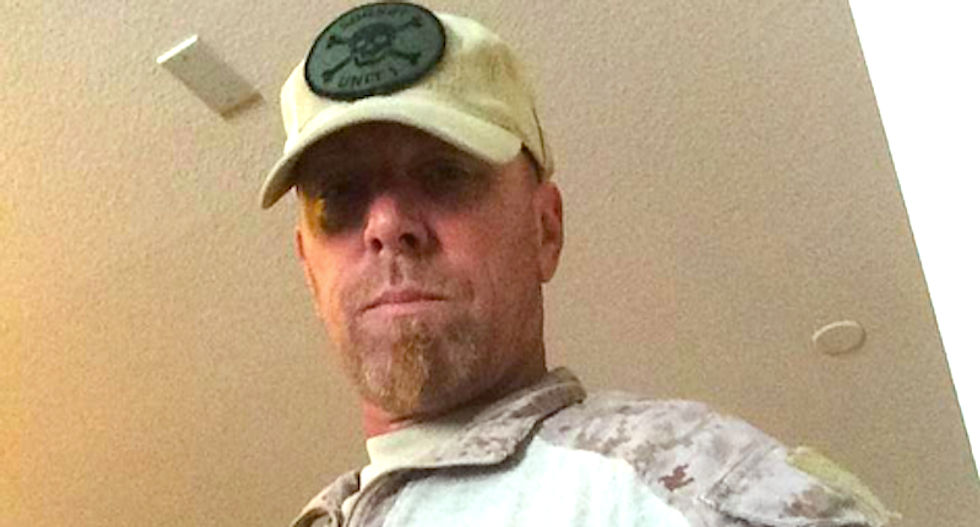 “We don’t know who these people are,” said Maria Cordero, an ACLU community organizer who lives near the Rio Grande. “They’re carrying high-powered weapons. It makes us feel less safe, not more safe, to have them here. I just hope they leave soon.”

Even some of the militia volunteers themselves have left the camps, which were set up during the summer to stem the tide of migrants flooding across the border in recent months, over safety and legal concerns.

“We asked several of the guys to leave that we found out were felons,” Chupp told the Southern Poverty Law Centers Hatewatch blog. “We have a Second Amendment to protect your right to bear arms, but we are also a nation of laws -- and there’s a reason we don’t let felons own guns.”

Chupp said he and some other militia volunteers voiced their concerns about the possibility that felons were illegally carrying guns at the camp.

“It came to be a problem, and it was loud, and ‘We don’t care what the gun laws are,’ and, ‘If we want to have this weapon even if it’s illegal, we’re going to have it,’” Chupp said. “It just turned south, and we pulled out.”

Militia members also posted video of themselves detaining three migrants after they crossed the border.

The video shows militia volunteer K.C. Massey, who describes himself as Camp LoneStar’s “commanding officer,” use zip-ties to handcuff the men behind their backs.

Massey posted on Facebook that militia patrols chased the men and seven or eight others until three of them stopped from exhaustion and were detained.

“One of the guys pissed himself!” Massey says, while another militia member agrees. “Dude pissed himself bad,” the second volunteer says.

U.S. Border Patrol officers eventually showed up and took the migrants, who Massey said were from Guatemala, Honduras, and Mexico.

“WE DO NOT AIM TO DETAIN, we would much rather send them back into the river into Mexico and dissuade them and the cartel from crossing on the property we patrol,” Massey said in the Facebook post. “All encounters were conducted in a humanitarian, professional fashion. Stay vigilant. Thank you for your support.”

When they’re not chasing migrants through the scrub or patrolling the Rio Grande, the militia members exchange conspiracy theories at their campsites.

The volunteers like to brag that they’re targeted by drug cartels – who Chupp blamed for the failure of his attempt to shut down border crossings.

Massey has told the Oath Keepers and others that he’s “No. 5” on the drug smugglers’ hit list, although he hasn’t offered any proof of the claim.

The militia volunteers also claim Border Patrol agents have detained a large number of Muslims, including wanted terrorists, and then covered up the arrests.

Those unsubstantiated claims have been widely shared on social media and elsewhere by Tea Party supporters – and Rep. Duncan Hunter (R-CA) made similar statements this week on Fox News.

Officials from the Department of Homeland Security have shot down Hunter’s claims, describing them as “categorically false.”

The Rachel Maddow Blog noted that Hunter had scheduled no public hearings on his claims, and he also did not pass the information on to law enforcement.

Watch video from the detention of three migrants posted online by Hatewatch: