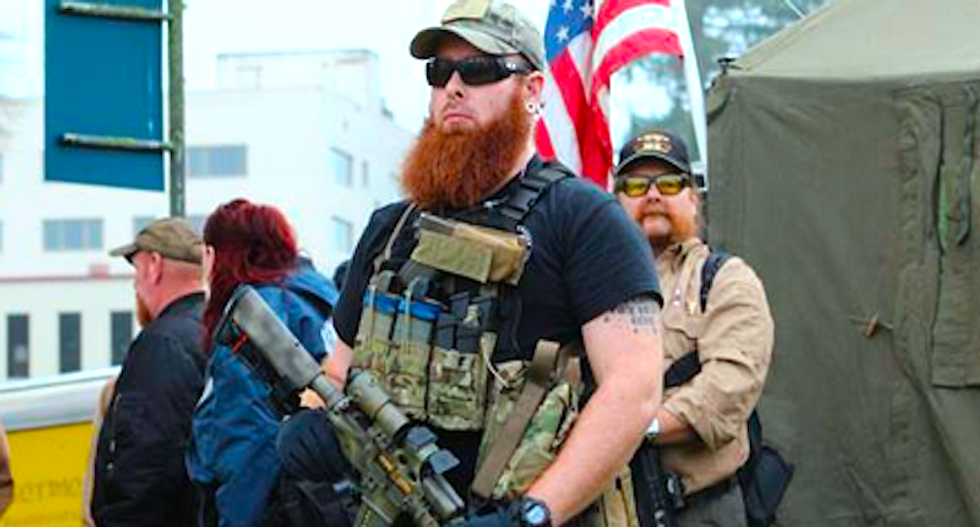 “If you want to own a bazooka, you can own a bazooka,” said libertarian activist Gavin Seim, who captured just 2 percent of the vote in a Republican primary.

Seim organized the “I Will Not Comply” rally against Initiative 594, which voters approved last month by a 19-point margin, to expand background checks for gun purchases, reported the Seattle Times.

“Who gets to decide who is mentally unstable?” Seim said, questioning whether the mentally ill should be prohibited from owning guns.

Seim, who burned his concealed-carry permit onstage and urged others to do the same, blamed gun regulators for the 2012 Sandy Hook school shooting – which marked its second anniversary the day after the pro-gun rally.

“The people that are trying to take our guns are the ones that are causing events where children and families and people are lost,” Seim said.

Seim, who was embroiled during his campaign in a dispute with city officials in Moses Lake over local sign ordinances, estimated about 1,500 people joined him at the State Capitol in Olympia, but State Police said the number was closer to 1,000.

“I don’t want to be put on anybody’s list,” said 48-year-old Justice Cuttrell, of Forks, Washington. “My guns were given to me by family and basically they’re unregistered. And I don’t think they should have to be registered.”

Some supporters wore military-style uniforms, including one that indicated membership in the Washington Militia, and many carried rifles and shotguns strapped to their backs.

The crowd booed when a speaker mentioned Gabrielle Giffords, a former Arizona congresswoman who has advocated stricter gun laws after surviving a gunshot wound to the head during a mass shooting.

"We are the 'III Percent,'" Vanderboegh said. "We will not fire the first shot, but if need be we will fire the last. We will not target innocents, like the militarized police units that will be dispatched to the doors of our homes in furtherance of I-594, but we will answer the guilty."

No arrests were made at the event, although some activists handed rifles to one another at a tent displaying an LGBT pride flag in an attempt to illegally transfer weapons.

But State Police said they could not prove the demonstration violated any laws.

“My rights are being infringed, our Constitution is being trampled,” said 57-year-old Robert Henry, of Chehalis.

Ammon Bundy, the son of recalcitrant rancher Cliven Bundy, had been scheduled to speak at the rally but did not show up.

Seim claimed at the rally, as he did throughout his campaign, that the Bundy ranch standoff nearly sparked “the second American Revolution.”

Watch video from the rally posted online by Rogue Reflections: