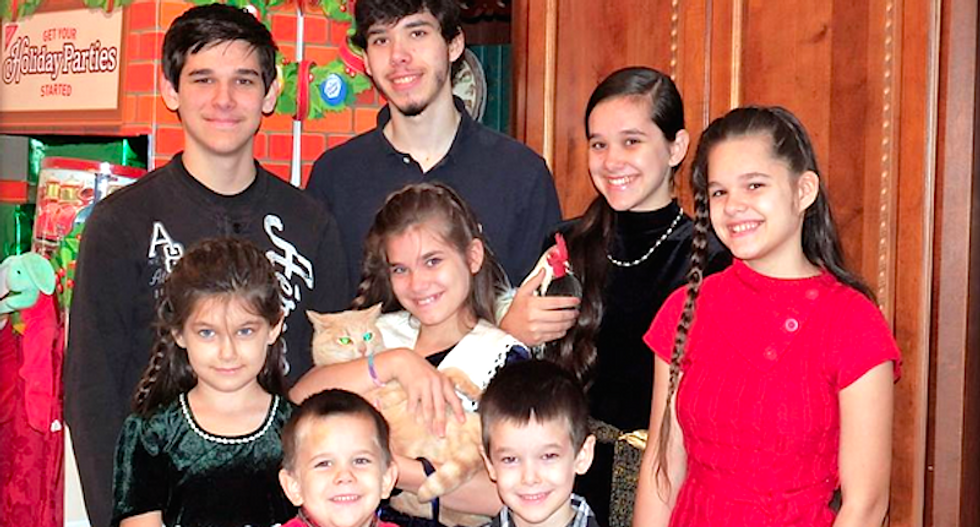 Authorities removed seven homeschooled children from an Arkansas “prepper” family during a search for a bogus “miracle” cure their father uses.

State troopers and Garland County authorities executed a search warrant Jan. 12 at the home of Hal and Michelle Stanley, and their school-age children were taken by ambulance for a medical examination after officers found containers marked “MMS.”

Miracle Mineral Solution is touted as a miracle cure for cancer, AIDS, malaria, and possibly Ebola, but the Food and Drug Administration said the substance can be turned into a potent bleach and cause serious health issues if ingested.

Users say they can tell the substance is working if they become nauseated – which the FDA argues will happen if it’s used as directed.

“The product, when used as directed, produces an industrial bleach that can cause serious harm to health,” the FDA warns. “The product instructs consumers to mix the 28 percent sodium chlorite solution with an acid such as citrus juice. This mixture produces chlorine dioxide, a potent bleach used for stripping textiles and industrial water treatment. High oral doses of this bleach, such as those recommended in the labeling, can cause nausea, vomiting, diarrhea, and symptoms of severe dehydration.”

Health officials have warned that it could cause more serious health issues, including death, if the product is not sufficiently diluted.

MMS was developed and promoted by Jim Humble, who claims he can heal by touch and quit Scientology to form his own church to help promote his so-called miracle cure in Africa and Mexico.

Humble claims MMS has been used by the Red Cross in Africa, and he claims to have run clinical trials on the substance at a prison in Malawi.

Hal Stanley, a pastor and Tea Party speaker, insisted he does not administer MMS to his children, but he admits to taking the mineral substance and using it to purify water in his garden -- which the family uses as a primary source of food.

Michelle Stanley said an anonymous caller reported last month that the couple’s children were running around barefoot in the winter cold, but she explained to police that they had shoes but liked to go outside to photograph their footprints in the snow.

But law enforcement returned last week with a search warrant and questioned the couple about MMS.

“After stepping outside they issued us a search warrant and said we could not enter our house or talk to our kids until the search and the investigation was through,” Michelle Stanley said. “They said the charge was that we had a poisonous substance in our house and that the kids were being exposed to it and it endangered their welfare.”

The Department of Human Services ordered the children removed from their home for 72 hours, but that has been extended to more than a week.

The Stanleys, who also have two grown children who attend college elsewhere, were allowed to visit Saturday with their children.

DHS filed its report Friday, which the Stanleys said focused entirely on MMS as the reason the children were removed and had nothing to do with their homeschooling.

Michelle Stanley denied Saturday in a Facebook post that the children had taken the substance, saying she and her husband “would never do anything knowingly to hurt any of our children.”

But she appeared to qualify her denial in remarks published Monday to World Net Daily.

“Never has it been used in any way to ‘poison’ our kids or even expose them in such a way as to endanger their lives,” Michelle Stanley said.

The DHS is not required to tell parents who lodged accusations of abuse or neglect, but the department must issue a report detailing the claims and then work with families to ensure their children’s needs are met.

Court action may be taken to ensure parents or guardians properly care for children in the care.

The Stanleys did not list the specific allegations made against them about MMS and their children’s exposure to the substance, but they plan to dispute the claims in a court hearing -- although Michelle Stanley admits the negative information authorities have gathered about MMS has "hurt our stand in court."

The Arkansas statute on child endangerment lists “extreme or repeated cruelty” to children among possible violations, and it also includes prohibitions against intentional or non-justifiable conduct that causes physical abuse or the threat of death or permanent impairment.

DHS and law enforcement agencies declined media requests for comment and have not indicated whether the Stanleys could face criminal charges.

The Stanleys have said they would give up their MMS to have their children returned, but the product’s proponents insist it’s no more dangerous than other commercially available drugs approved by the FDA.

“This stuff is a game changer, I have taken it for several years now and illness is a thing of the past,” says one Amazon reviewer. “Thumb your nose at the FDA and big Pharma. Believe this bookand all Jim Humble has to say. You don`t need your doctors permission to be healthy.”