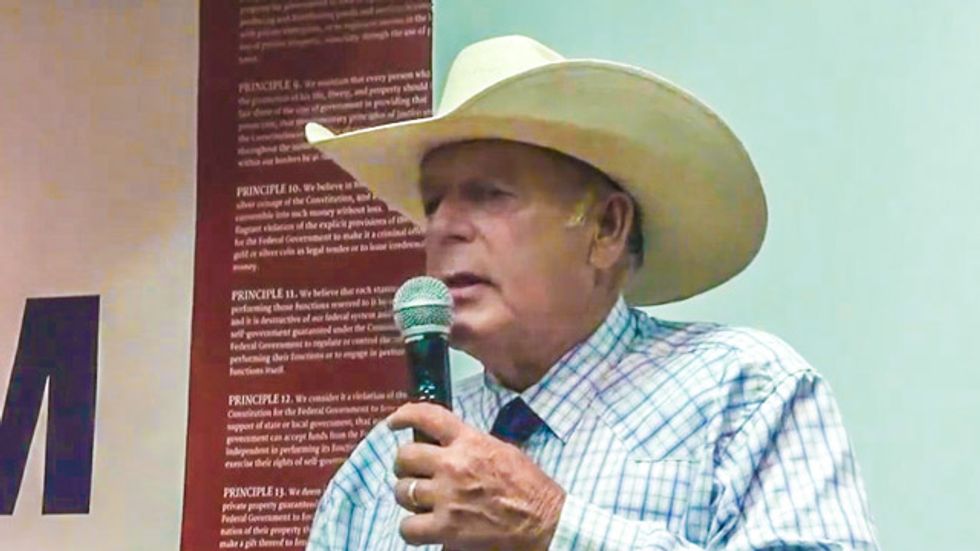 The owners of a southern Oregon gold mine claim and conservative activists were set on Thursday to hold a rally outside a Bureau of Land Management office amid an escalating land dispute between the U.S. government and the miners.

A co-owner of the Sugar Pine Mine, Rick Barclay, called in armed guards from the conservative Oath Keepers activist network after federal officials served him with a stop-work order last month for failing to comply with federal regulations.

The miners have made clear they are trying to avoid a standoff like the headline-grabbing fight between Nevada rancher Cliven Bundy and the federal government last year. The BLM sought to seize cattle because Bundy refused to pay grazing fees, but federal agents ultimately backed down.

In response to the stop-work order in Oregon, miners backed by local protesters and sympathizers flocking in from other states will gather at noon on Thursday at Oregon BLM offices, Oath Keepers said.

The biggest crowd is expected at the Medford office where Barclay and co-owner George Backes will "serve papers to the BLM to in an ongoing attempt to find a legal resolution to the matter," according to the mine's website.

The miners have until Friday to comply with or appeal the government action, Oregon BLM spokesman Jim Whittington said.

At issue is a dispute over the ownership records of the mine, Whittington said. The owners argue they have exclusive surface rights and do not have to follow federal regulations.

Whittington said Barclay and Backes own the mining rights to the land, but not the surface rights, which were ceded to the BLM in 1961 by owners at the time.

Whittington said BLM employees have been told to stay away from the mine because of the armed activists.

Appeals by the owners and Oath Keepers have produced an outpouring of support on social media websites, including a selfie video of sympathizers driving to Oregon.

Cliven Bundy's son, Ammon, told Reuters that two family representatives had traveled to southern Oregon, and that Cliven and the family were "closely watching" the situation and have offered support to the protesters.

Mary Emerick, a spokeswoman for Oath Keepers, said more supporters would come over the weekend to fill jobs needed for a long-haul protest, from mine security to cooking.

"Everybody can find a place and everybody can join in to support constitutional rights," Emerick said.

DOJ must investigate missing Trump texts: expert says it looks like 'this was not a mere accident'

The data deletions, Mariotti argued to anchor Ari Melber, are beginning to look like something intentional — and the Justice Department should step in and investigate.

The scandal over the Pentagon erasing the cell phones of top Trump officials took another bizarre twist on Tuesday when a member of the House Select Committee Investigating the Jan. 6 Attack on the U.S. Capitol revealed she only learned today about the destruction of potential evidence.

CNN's Pamela Brown interviewed Rep. Zoe Lofgren (D-CA), who has experience in all the modern presidential impeachments after serving as a staffer during Watergate and a member of Congress during the impeachments of Bill Clinton and Donald Trump.

"On Tuesday at the trial, Lewis spoke to the incendiary host directly, looking him in the face as he sat next to his defense attorney and frequently squirmed in his chair," reported Danielle Campoamor. "'I wanted to tell you, to your face, because I wanted you to know that I am a mother, first and foremost. I know that you’re a father,' Lewis told Jones. 'And my son existed. You’re still on your show, today, trying to say that I am — implying — that I’m an actress. That I’m ‘Deep State.’ You have. This week. And I don’t understand.'"