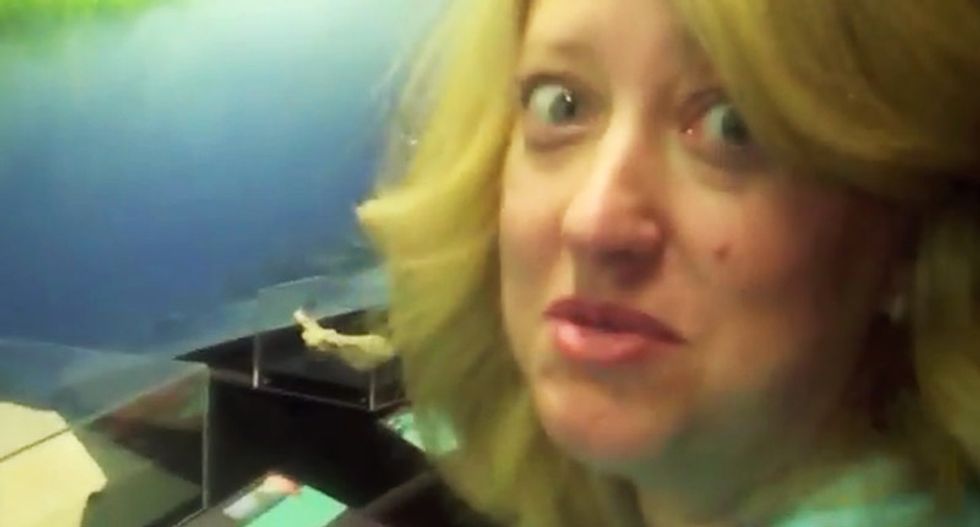 Megan Fox, the home-schooling mom who "destroyed" evolutionary science in a video that went viral -- with a million views -- is back, casting her critical eye on Christian fundamentalist Ken Ham's Creation Museum, located in Petersburg, Kentucky.

Fox -- not to be confused with the actress from the Transformer movies -- is the self-described "homeschooling Chicago suburban mother of three who writes for PJ Media and audits museums and other cultural attractions for propaganda and bias." Fox maintains a YouTube channel where she posts videos of herself at various attractions -- including a memorable visit to the Brookfield Zoo in search of dragons.

In the new video, with the promising title of  "Part 1," Fox visits Ham's Creation Museum as a guest of Ham's brother Steve. Stepping inside the museum,  she delights in watching a movie detailing God's creation of Earth according to the Book of Genesis, -- comparing it to a video on evolution at Chicago's Field Museum of Natural History -- only in a more positive vein, saying, "It's pretty convincing."

Despite her enthusiasm over visiting the Creation museum, Fox is not entirely sold on creationist theory of 6,000-year-old universe.

Fox then provides a tour of the 70,000 square feet museum, stopping before a diorama of cavemen in a forest setting intermingling with deer, wolves, and penguins -- yes, penguins -- before ending up before plans for Ham's proposed model for full-sized Noah's Ark, which Fox notes "Looks huge."

Fox concludes that creation theory is as valid as anything because, "Nobody was there to see it."

Watch the video below, uploaded to YouTube by Megan Fox

Road-raging driver rammed ambulance and got stuck – then things went even more sideways for him: police

A Washington man has been arrested for DUI after he allegedly rammed an ambulance during a road rage incident this Monday, KREM2 reports.

According to the Stevens County Sheriff’s Office, the man “felt like the ambulance had pulled out in front of him and was now driving to slowly for his liking.”

Georgia election board dismisses claims of ‘ballot harvesting’ in 2020 election

The Georgia State Election Board voted unanimously Tuesday to dismiss three cases based on claims of illegal “ballot harvesting” as the baseless conspiracies over the 2020 presidential election still swirl even as the 2022 election season is already well underway and setting records for early voting.

The board, comprised of three Republicans and one Democratic appointee, agreed to accept a state investigator’s recommendation to not pursue claims against three Gwinnett County residents erroneously suspected of illegally dropping off multiple absentee ballots into drop boxes. Investigators with the secretary of state’s office determined the ballots were from voters themselves and family members living in the same households.