Homeschool mom rips Charles Darwin: 'If he were any kind of good scientist, he would start over again' 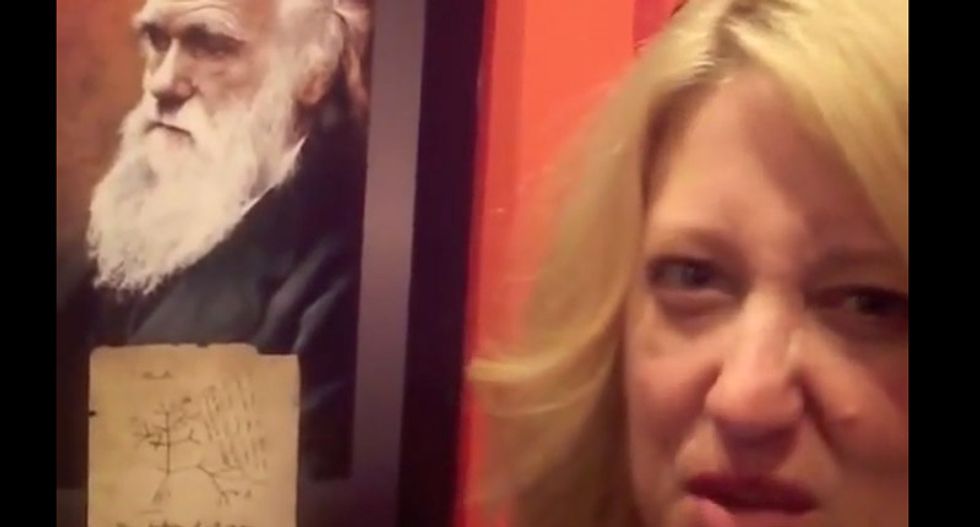 Homeschool mom Megan Fox thinks Charles Darwin would be gravely disappointed if he were to return from the grave (Screenshot/YouTube.com)

In “Part 2″ of Megan Fox’s audit of Ken Ham’s Creation Museum in Kentucky, the homeschool mom insists the theory of evolution is unscientific before explaining that Charles Darwin would “not be too happy” with his followers if he were to come back to life.

(In order to fully appreciate the complexities of Fox's audit of the Creation Museum, "Part 1" can be found here.)

"Whales evolved after bears -- this is not a lie," she said sarcastically. "Bears walked into the ocean with their mouths open looking for food and became whales. Magical."

Turning to the father of evolutionary theory, Fox stood up for the Darwin -- explaining he would be none too pleased with what scientists have done with his theories in the 133 years since he died -- before saying he really needs to start over from scratch.

"I think if he were alive today I don't think he would be pleased with what his followers are doing. I don't think he'd agree, " she said. "You know the cell is more complicated than he thought it was. And if he were any kind of good scientist, he would start over again, look for other explanations because this one doesn't quite fit."

Summing up her philosophy about the development of theories and the scientific method, Fox said, "It's certainly fun to talk about, isn't it? Isn't it fun to have alternate theories on things. You don't have to believe it necessarily, but it is certainly fun to think about and talk about. I mean, there are other explanations for everything in life, aren't there?"

Watch the video below, uploaded to YouTube by Megan Fox: