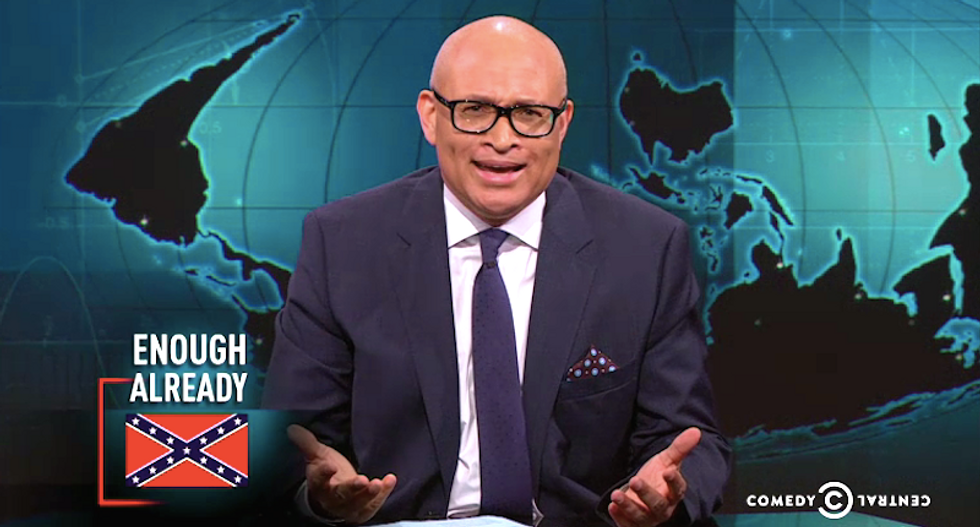 Larry Wilmore expressed frustration with the process for removing the Confederate flag that flies over the South Carolina capitol.

Republican Gov. Nikki Haley called Monday for the flag to be removed from its symbolic location in the wake of the massacre of nine black churchgoers by a white supremacist.

“Yes! You can applaud,” Wilmore said. “That is the right thing to do – good for you, South Carolina.”

“But seriously, guys -- who could have been against this, right?” he continued. “I mean, especially in light of the incident that just happened, and particularly in 2015. Anyone running for president trying to get Republican votes, because this is what they said this week.”

He played video clips of statements by candidates Marco Rubio, Mike Huckabee, Jeb Bush, George Pataki, and Rick Santorum – who each indicated that South Carolina should decide, not the president or presidential candidates, whether to officially sanction and display the Confederate flag.

“Man, state’s choice is the classic presidential candidate cop-out, right?” Wilmore said. “‘Hey, when you ask me if I think the sky is blue, I think that’s a question best left up to the states. They should decide. How do I know what you would do with the flag? I’m not a flag scientist. I want to be president of the United States, not president of flags.’”

He wondered how soon the state would remove the flag from the capitol grounds.

Instead, the governor said she would call legislators back into session if they did not agree on their own to debate the flag’s removal – which requires a two-thirds majority vote under state law.

“So you want them to come back to debate taking it down, but there’s a chance that they won’t, so you’ll say, ‘Hey, guys – you better come back and talk about this,’” Wilmore said. “South Carolina, it sounds like you’re trying to f*ck me on this.”