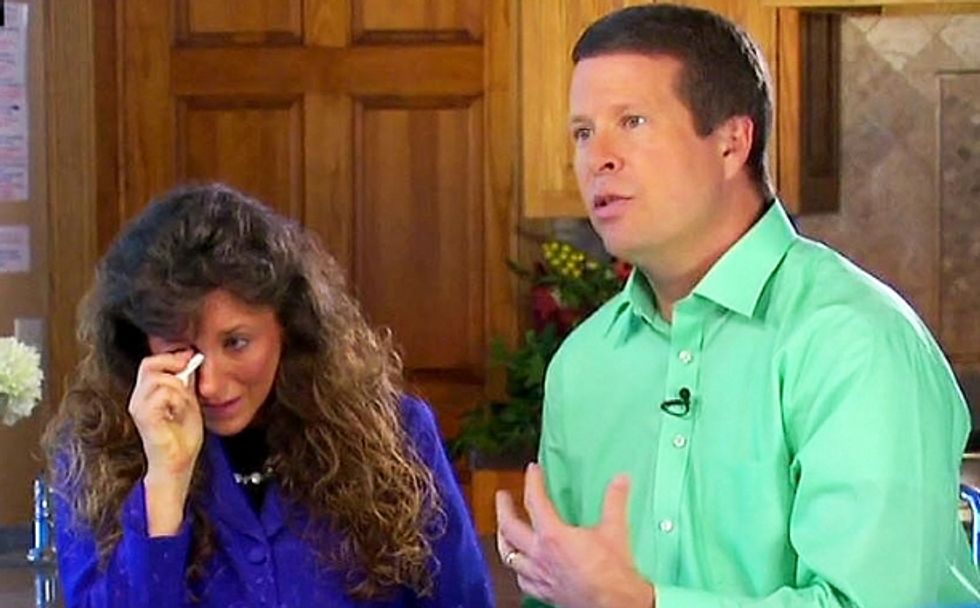 The magazine that broke open the Josh Duggar sexual molestation scandal covered up by his parents eight years ago has responded to their overly sympathetic interview on Fox News with host Megyn Kelly, saying the couple lied, smeared  police authorities, and lied by omission Wednesday night.

According to In Touch, multiple statements made by Jim Bob and Michelle Duggar during the hour-long interview could have been easily disproved on air if Fox researchers had done their homework and read the documents and statements that were publicly available before Kelly conducted her interview.

In Touch specifically took issue with the Duggar's assertion that the sealed juvenile file containing information on Josh Duggar's sexual assaults on five young girls -- including four of his sisters -- was obtained illegally using the FOIA.

According to Jim Bob Duggar, "This information was released illegally," with the couple accusing Springdale police chief Kathy O’Kelley of possibly taking "a bribe" and having "an agenda."

As In Touch notes, the file was obtained legally, with the Northwest Arkansas Democrat Gazette already writing that claims otherwise are “disputed by the law enforcement agencies involved, the Arkansas Press Association and attorneys with expertise in public-document cases involving the state's Freedom of Information Act."

According to John Tull, a Little Rock attorney who specializes in public-record cases, "They had to release the reports. Those records are not closed under FOI. The alleged perpetrator had attained his majority at the time it was released, and once his name and all the victims' names were blacked out, it was subject to FOI."

Disputing O'Kelley was behind the release, In Touch reminded the couple that they were also able to request the file under the FOIA from the Washington County Sheriff’s Office which is independent of O'Kelley.

While Jim Bob Duggar explained that he and his son willingly met with police to discuss what had happened, notes on one of the publicly available reports specifically states that Josh Duggar canceled an important interview with a police investigator, with his father leaving a voice-mail saying saying his teen son had lawyered-up.

While Duggar maintained that, as parents, he and his wife were not legally "mandated" to report their son's transgressions, Michael Johnson, a former United States Attorney for the Eastern District of Arkansas, disagreed, saying, “It is possible that investigators looking into this case could have cited the parents Jim Bob Duggar and Michelle Duggar with Arkansas Code 5-27-221 ‘Permitting Abuse of a Minor.’ Having once learned of the behavior, they recklessly allowed it to continue."

According to Johnson, the Duggars could have been subject to  six years of imprisonment and a $10,000 fine.

Megyn Kelly stated the Duggars “hadn’t gotten a heads-up” about the release of Josh’s police report which the Duggars did not dispute during the interview. However In Touch has obtained documents that show the city of Springdale did alert them before releasing the records although they were not obligated to do so.

In Touch editors continue to make all the documents they have uncovered available to anyone who visits their website.