La. gunman was a Tea Partier who hated Obama, admired Hitler and wanted women to shut up in church 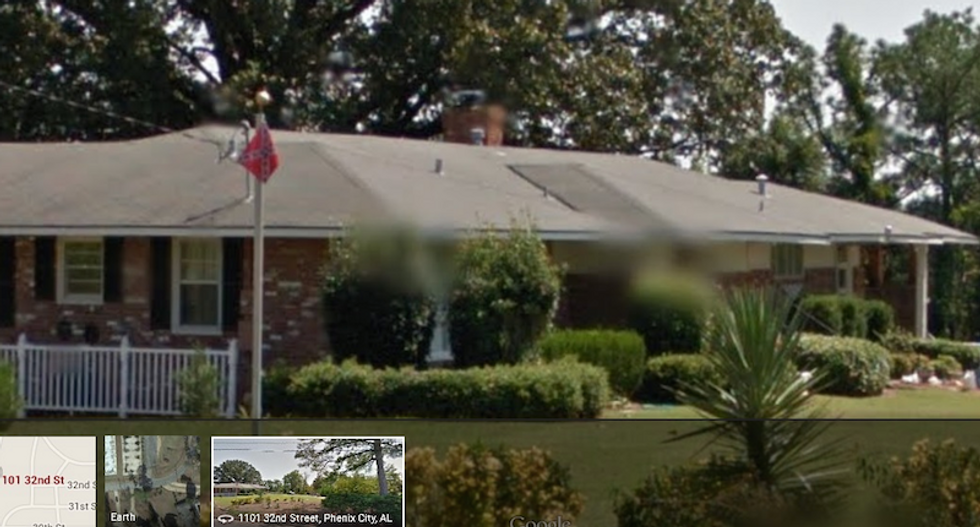 House where Rusty Houser lived until earlier this year (Google)

The gunman who killed two moviegoers and wounded nine others had a prolific online commenting history that revealed a fascination with censorship, Iran, and right-wing politics.

John Russell Houser, of Phenix City, Alabama, posted frequently across a variety of online forums -- from political discussions to message boards for Oldsmobile enthusiasts -- where he complained about "moral decay" and media brainwashing.

"America is so sick that I now believe it to be the enemy of the world," he wrote under the name Rusty Houser in a December 2013 comment on Fellowship of the Minds. "I know next to nothing about Iran, but the little I do know tells me they are far higher morally than this financially failing filth farm."

The 59-year-old Houser, who told acquaintances that voting was waste of time, was less active on Facebook and Twitter, although he left behind some clues about his beliefs on those social media networks.

"If you don't think the internet is censored, try reading a newspaper from a country that hates liberals the way I do," reads his second -- and last -- Twitter post, from June 2013. The first argues that "Westboro Baptist Church may be the last real church in America [members not brainwashed]."

RELATED: Lafayette shooting victims were a bright student and an artistic entrepreneur

His Facebook account shows just two likes -- the "I hate liberals!" political organization, which uses an avatar that reads "Stand with Rand," and the Crossroads Irish-American Festival.

Posts on his Facebook page reveals an interest in limiting women's influence over the church, a hatred for American culture, and complaints about liberals "brainwashing" Americans into hating their own country.

"The bible doesn't ask me to like what it says, only to obey it," Houser wrote. "Death comes soon to the financially failing filth farm called the US."

Houser was evicted last year from a rental property on 32nd Street, where his estranged wife owns a home that can be seen flying a Confederate flag on a Google maps search. It’s not clear whether he lived at the home when the photo was taken.

A criminal mischief complaint was filed against him after he destroyed some property at the home, but the Russell County sheriff said he was not sure whether an arrest warrant was issued.

The owners of the home explained their ordeal with Houser to the Ledger-Enquirer.

Houser was turned down for a concealed carry permit in 2006 because of apparent mental health issues and a previous arrest in Columbus, Georgia, for arson.

A former attorney said Houser had tried to hire someone to burn down his law office in the early 1980s but later attempted to run for political office.

Another acquaintance said Houser has an alcohol problem and had been acting increasingly unstable.

He was treated in 2008 and 2009 for mental health problems after his wife and other family members took out a temporary protective order against him for "extreme erratic behavior and has made ominous as well as disturbing statements."

The filing shows Kellie Houser was so fearful of her husband, who "has a history of mental health issues, i.e., manic depression and/or bi-polar disorder," that she removed all the guns from their home.

The order was granted, according to court records, and she filed for divorce in March 2015.

Police said Houser had been staying at a Motel 6 in Lafayette, where an uncle who died about 35 years ago had lived, since early this month.

Houser indicated that he frequently spoke out about wasteful spending at Columbus City Council and Water Board meetings, and the city's former mayor said he remembered him.

"He came to many City Council meetings and he was in tune with a lot of issues that were going on in the community," said Superior Court Judge and former mayor Bobby Peters. "He was very outspoken, highly intelligent, really didn't trust government and anything about government."

"He always thought something was going on behind the scenes," Peters continued. "He came across with a very conservative agenda."

Peters said Houser was often dealing with personal legal troubles, and he said the man seemed to have difficulty finding a job he liked.

"He was always looking for his niche," he said. "The thing he enjoyed the most, and he would tell you, is that he would like to almost cross-examine elected officials on talk shows and in council meetings."

Houser signed up for an account with Tea Party Nation in June 2013, but he was not an active commenter.

Posts on other forums reveal Houser's belief that the U.S. was racist against white people, sterilization should be mandatory for welfare recipients and former Ku Klux Klan leader David Duke was a more historically significant figure than the Rev. Martin Luther King Jr.

"Hitler accomplished far more than any other through 'pragmatically forming,'" Houser posted in January 2015.

He wrote something of a manifesto in March 2013, when he asked for help channeling his anger and frustration as a white Christian man living under President Barack Obama.

1 Recognize a lost cause.It is too late.The US is oozing the puss of foolishness and perversion.

2 Find a positive way to exert your energies.I recommend laughing as often as possible.Here is something that is truly funny: since I accepted this it came to me that the president is doing exactly what Tim McVeigh did,only the president is much more effective.The way I see it,the faster he wrecks this nation, which in no way resembles what it's founders envisioned,the faster working people with morals may re-assume command.ie I was for his re-election. I like his spending habits.etc......Truth and death always go hand in hand, and in our brave moments we can laugh. Whatever truth requires, I will accept.

3 Encourage whatever takes us forward. Right now, down is forward.

4 For the few who will understand this, it is my hope that you will see to one preparation for the coming downfall, which will be worse than a Mad Max scenario. That preparation is not storing up canned goods, munitions,etc, but to gather what will be necessary to put in your families food to insure a painless and certain death should the need arise.,if there are no cell phones,no TV,no power,gas,no stores,no police,etc.

5 If you are male, fight until the end, and enjoy it.People are good at what they enjoy, and your Maker would want it that way.

Houser argued in a January 2014 forum post that the United States needed a right-wing party like Greece's neo-Nazi "Golden Dawn" faction to restore its greatness.

"The financial failings of the US, and the bleak outlook, are known to the world," Houser argued. "The average person in the US has not however figured out that the US is employing censorship of the internet. If you type in NEWSPAPERS PUBLISHED IN IRAN, you will see about thirty such publications,none of which are published in their entirety, and none which your computer will translate.It might be permissible to put some political remark at the top of each page claiming bias, but to blackout all is nothing short of base censorship."

He said the U.S. media censored evidence of its own censorship, which he believed only proved his point, and kept Americans from connecting with extremist groups.

Houser seems to have connected with one of those organizations when he registered in 2005 to attend David Duke’s EURO Conference in New Orleans.

"Type in WHITE POWER GROUPS and you get mag articles about their never ending claims of racism, and no information of how to find White power groups you might want to join," Houser wrote. "I could go on for months. My point? Censorship coupled with brainwashing, is always present before the fall of a significant political entity. Put this together with our newly found financial reality, and you've got notice of things to come."

Houser was a frequent guest on the "Rise & Shine" talk show on WLTZ-TV, whose host booked him many times in the 1990s because "he could make the phones ring" when paired against a Democratic guest.

"He was on from time to time because he was a very radical person with radical views," said former host Calvin Floyd. "He was a Republican, and then I would have someone with a real strong Democrat view on."

Floyd said he was not surprised when Houser, who argued against women in the workplace and advocated violence against abortion providers, was identified as the gunman.

"The association I had with him was for entertainment," Floyd said. "He was very entertaining. He made for good TV and when it was over, you would leave shaking your head."

The former host -- who said Houser appeared about 15 to 20 times but never, as the gunman claimed on social media, had guest-hosted the program -- clearly had a problem with women.

“He was anti-abortion," Floyd said. "The best I can recall, Rusty had an issue with feminine rights. He was opposed to women having a say in anything."