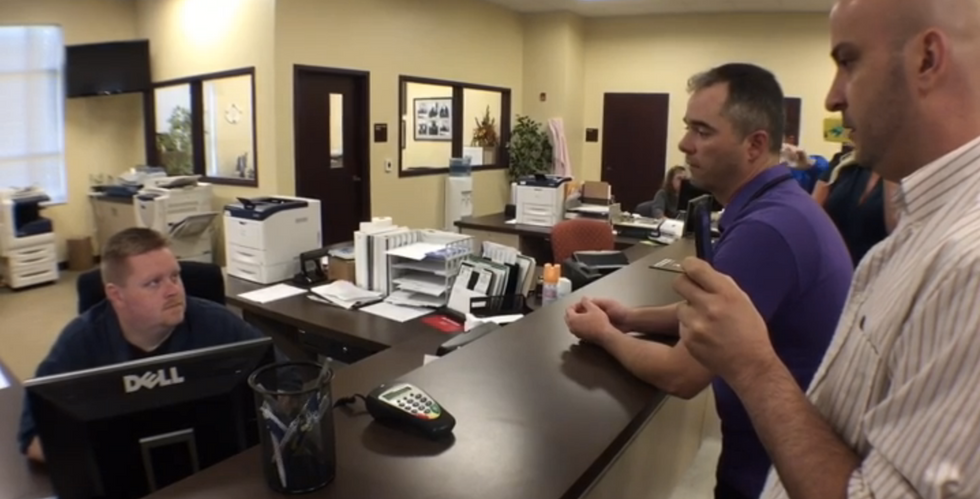 A gay couple in Kentucky was denied a marriage license for a third time by a defiant county clerk.

James Yates and William Smith Jr. went Thursday morning to the Rowan County Courthouse to seek a license to be married but found that County Clerk Kim Davis still was refusing to issue them one as she fights federal court orders, reported the Courier-Journal.

The 6th Circuit Court of Appeals on Wednesday slapped down the latest challenge filed by Davis, with help and encouragement from the conservative Liberty Counsel, ruling that county clerks are obligated to follow the U.S. Supreme Court ruling in Obergefell v. Hodges and not their own personal beliefs.

Yates and Smith, who have attempted to obtain a marriage license each time the clerk is dealt a legal setback, were told by an apologetic deputy clerk that Davis believes a previous stay granted by a judge remains in effect until Aug. 31 despite the appeals court ruling.

"Sorry, guys," the deputy clerk says in video recorded during the attempt.

"It's just making us want to press more," Yates said. "She can't get away with this."

The couple said they would return next week and ask for a marriage license a fourth time.

Another defiant county clerk, from Casey County, suggested this week he was willing to be jailed or killed for refusing to follow the law.

“If it takes it, I will go to jail over — if it takes my life, I will die for because I believe I owe that to the people that fought so I can have the freedom that I have," said Casey Davis, the Casey County clerk.

Watch video of the encounter posted online by the Courier-Journal: