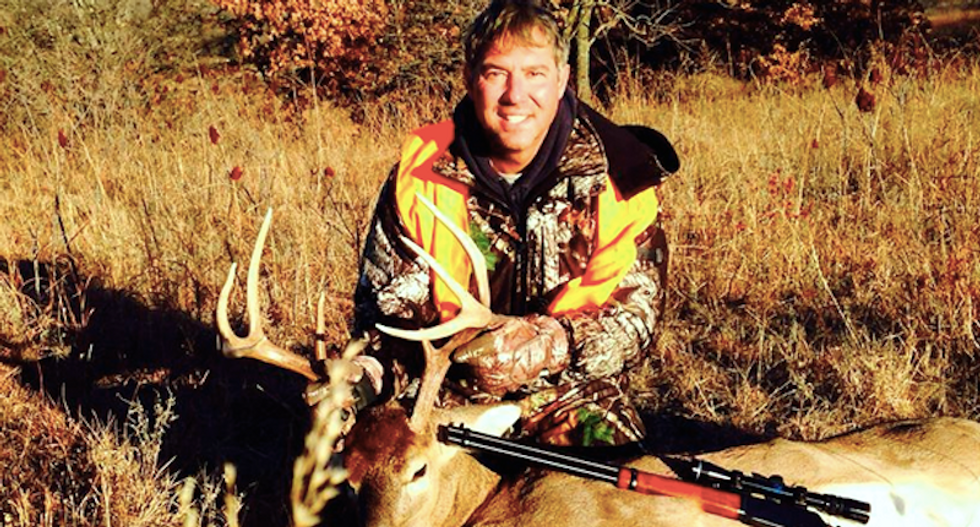 Anti-abortion extremist Troy Newman, head of Operation Rescue, has been denied a travel visa to Australia.

Newman had been scheduled to speak at a "save the babies down under" event promoted by Right to Life Australia before a member of parliament raised character questions about the militant activist, reported The Guardian.

Terri Butler, a Labor Party lawmaker, asked Peter Dutton, the immigration minister, to deny a visa to the "anti-choice extremist" because, she warned, Newman could “cause significant harm to our community” because he had previously called for the execution of abortion providers.

Dutton confirmed Wednesday that Newman had been barred from entering the country, but pointed out that he could appeal the travel visa's cancellation.

In the United States, however, Newman is leading attacks -- joined by Republican lawmakers -- on Planned Parenthood.

Newman and other Operation Rescue officials have been coordinating a "sting" against the health care provider using deceptively edited undercover videos produced by a front group, Center for Medical Progress.

Operation Rescue has been relegated to the fringes for its ties -- including the group's second-in-command, Cheryl Sullenger, who was convicted in a bomb plot -- to violence and threats against abortion providers.

That's why Newman cooked up the Center for Medical Progress with David Daleiden -- a younger, lesser-known activist -- to obscure his extremist group's involvement in the undercover videos that anti-choice activists claim shows Planned Parenthood illegally selling fetal tissue for profit.

Multiple independent investigations have found no evidence of wrongdoing by the health care provider, and an analysis of the videos have found that they are misleading, at best.

Operation Rescue fired back after Newman was barred from boarding a flight from Los Angeles to Australia, after flying from Kansas, blaming the visa cancellation on “viciously false accusations brought by Australian pro-abortion activists and news media."

“Newman has never advocated violence and in fact, urges pro-life activists to work within the governmental and legal system to accomplish change,” the anti-abortion group said in a statement.

Sullenger, who served two years on a three-year sentence for her role in a 1988 clinic bombing plot, complained that Newman "had been the victim of “political persecution, plain and simple, as well as an attempt to silence the pro-life message in Australia."

The president of Right to Life Australia said Newman had suffered a "gross denial" of his human rights.

“We’re working as hard as we can to make sure his visa is reinstated,” said Margaret Tighe, national president of the group. “The reason they want to stop him coming is because he had been very effective (and) the only reason they are doing this is to prevent freedom of speech.”

Butler, who called for Newman to be kept out of Australia, pointed to a 2003 book, Their Blood Cries Out, co-authored by Newman that called for executing abortion providers.

"The United States government has abrogated its responsibility to properly deal with the blood-guilty," wrote Newman, along with Sullenger and Father Frank Pavone. "This responsibility rightly involves executing convicted murderers, including abortionists, for their crimes in order to expunge bloodguilt from the land and people."

Pavone, one of the book's co-authors, is also a controversial figure.

“Mr. Newman’s public comments go well beyond what would be regarded as acceptable debate in this country,” said Senate Leader Penny Wong. “His views are repugnant. Mr. Newman’s presence in Australia risks inciting intimidation and violence against vulnerable women.”

Watch video of Newman learning that he won't be allowed to fly from the U.S. to Australia:

RED ALERT!!! The Australian government has revoked my visa in midflight. I was pulled off a plane in Denver and told I could not travel to Los Angeles. And then on to Melbourne Australia. I am scheduled to speak on Friday at Right to Life of Australia's main convention in Melbourne. It is clear that the pro-abortion crowd does not want anyone to hear the truth about Planned Parenthood's illegal actions. Please pray for me I'm stuck in Denver airport like a man without a country. Please share this video and make it go viral.