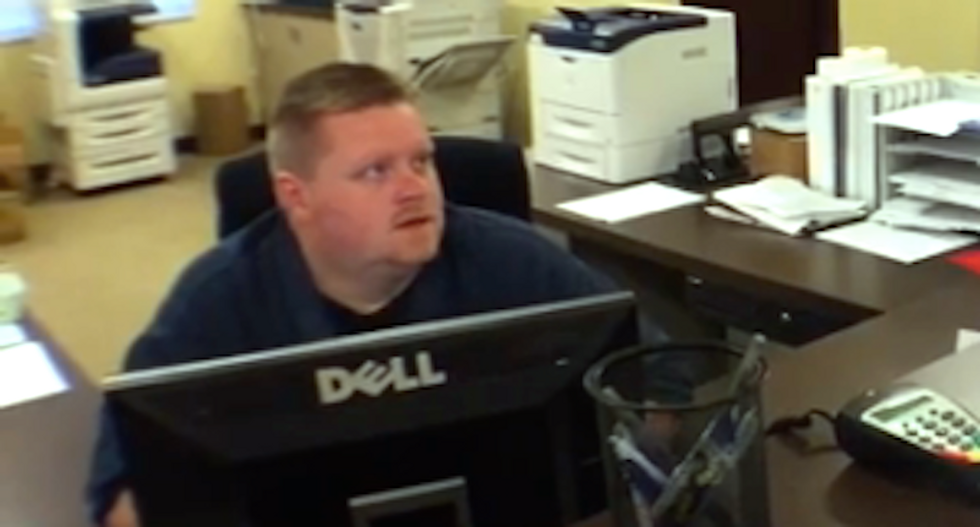 Kim Davis is taking the day off after her release from jail on contempt charges.

The Rowan County clerk's attorney said Davis would not return to work Wednesday, and it's not clear whether Davis will abide by a federal judge's orders on her conditional release.

U.S. District Court Judge David Bunning agreed to release Davis after he held her in contempt of court, but he ordered the elected county clerk not to interfere "directly or indirectly" with the issuance of marriage licenses in her office.

Five of the six deputy clerks agreed to issue marriage licenses to same-sex couples last week after Davis was jailed. Davis' son -- who also works in the office -- refused to comply but was spared jail by Bunning.

One of those deputy clerks, Brian Mason, said he would continue to issue marriage licenses even if Davis orders him not to do so.

Mason -- who hung a sign describing himself as the official “marriage license deputy" Friday morning, after Davis was jailed -- is the deputy clerk who issued the county's first marriage license to a same-sex couple and previously apologized to couples before turning them away on the clerk's order.

Mat Staver, the head of the conservative Liberty Counsel that is representing Davis free of charge, signaled Tuesday that the county clerk would again refuse to follow court orders.

"Kim Davis cannot and will not violate her conscience," Staver said.

Attorneys said Davis would likely return to work Friday or Monday, and her supporters demonstrated outside the Rowan County courthouse and demanded the firing of "law-breaking deputies."

CNN reported that attorney Harry Mihet, of Liberty Counsel, said Davis would attempt to stop marriage licenses with her name on them -- which would appear to risk another contempt of court sanction.

"If she goes back on the job as is expected, she will bring the process to a halt," reported CNN's Martin Savidge. "That’s what her attorneys believe.”

The same-sex couples who filed suit against Davis have all received marriage licenses issued by Rowan County, but those licenses to do not list the clerk's name.

The ACLU, which sued on behalf of those couples, told Bunning that their goals had been accomplished through the lawsuit, and the judge ordered Davis released because he was satisfied that Rowan County had followed the law in the clerk's absence.