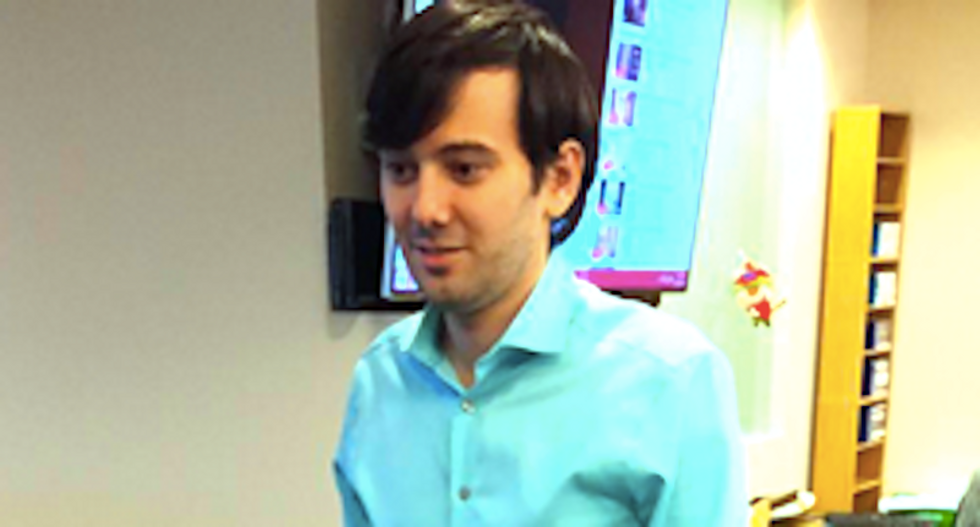 This isn't the first time Martin Shkreli, the most hated man on the Internet, has attracted criticism for his unscrupulous business dealings.

Shkreli has ignited a firestorm after purchasing the rights to Daraprim, a 62-year-old drug used for treating life-threatening parasitic infections in babies and AIDS patients, and raising the price overnight from $13.50 per tablet to $750.

He gave an interview Monday to Bloomberg, which has taken a "special interest" in the 32-year-old Shkreli after the "self-trained biologist" dramatically changed his position on biotech futures.

"We’ve wondered whether, after years of betting on biotech stocks to fall, he’d undergone a conversion or was using his knowledge to game the field," wrote Bloomberg's Peter M. Barrett last year.

Shkreli founded the biotech company Retrophin, but he was "unceremoniously dumped" Sept. 30, 2014, as chief executive after the company's board of directors concluded "Shkreli had committed stock-trading irregularities and other violations of securities rules," reported Bloomberg.

The company he founded in 2009 sued Shkreli last month for $65 million in damages, claiming the ex-hedge fund manager gave away Retrophin shares to friends and used the biotech firm's assets to pay off personal debts and keep afloat his sinking investment firm, MSMB Capital Management.

A filing made in November 2014 with the U.S. Securities and Exchange Commission showed Shkreli pulled in nearly $3 million in gross proceeds as he continued selling company stock while simultaneously urging investors to buy into Retrophin -- which the rapper-quoting then-CEO hyped on his Twitter account.

Shkreli began plundering Retrophin after his hedge fund -- which eventually collapsed -- made a "disastrous" investment in Orexigen, reported FierceBiotech.

MSMB Capital Management lost more than $7 million and went "virtually bankrupt" after the 2011 investment, but Shkreli formed a health care-focused branch of the hedge fund to keep the company afloat rather than telling investors he lost their money.

Shkreli finally told investors he was dissolving the hedge fund to focus on Retrophin -- and he offered to redeem their investments in cash or stock in his new company, the website reported.

The lawsuit, however, alleges that Shkreli used a series of "extra-legal maneuvers" to essentially turn Retrophin into his personal bank -- and now the company seeks every bit of money he made off the company.

The suit points out that Shkreli was accused in December 2013 of threatening a former MSMB employee and his family on social media and in written letters.

"I hope to see you and your four children homeless and will do whatever I can to assure this," the former employee Timothy Pierotti, claimed his old boss had written in a letter to his wife.

Pierotti, who reached an out-of-court settlement of a lawsuit filed against him by Retrophin, said Shkreli contacted his children on Facebook and accused their father of betraying him and stealing $3 million from him.

Shkreli founded Turing Pharmaceuticals AG in February, as securities fraud allegations swirled around him, with three products acquired from Retrophin.

The company initially started out with an intranasal form of ketamine, which the company is developing for psychiatric use, the synthetic oxytocin drug Syntocinon and the hypertension drug Vecamyl.

Shkreli has defended his decision to hike the price of his latest acquisition, Daraprim, by 5,500 percent -- saying the increase was necessary to protect his investment and still kept the drug "underpriced" on the current market.

Turing has extended co-pay assistance to individual patients who rely on Daraprim, but the federal government and private insurance companies will likely be stuck paying the difference -- which they will then pass on to taxpayers and consumers.

Shkreli insulted reporters who questioned the price hike, calling one a "moron" and suggesting the details were too complicated for the average person to understand.

The ousted Retrophin chief responded to the lawsuit filed against him last month by invoking a Wu-Tang Clan lyric.