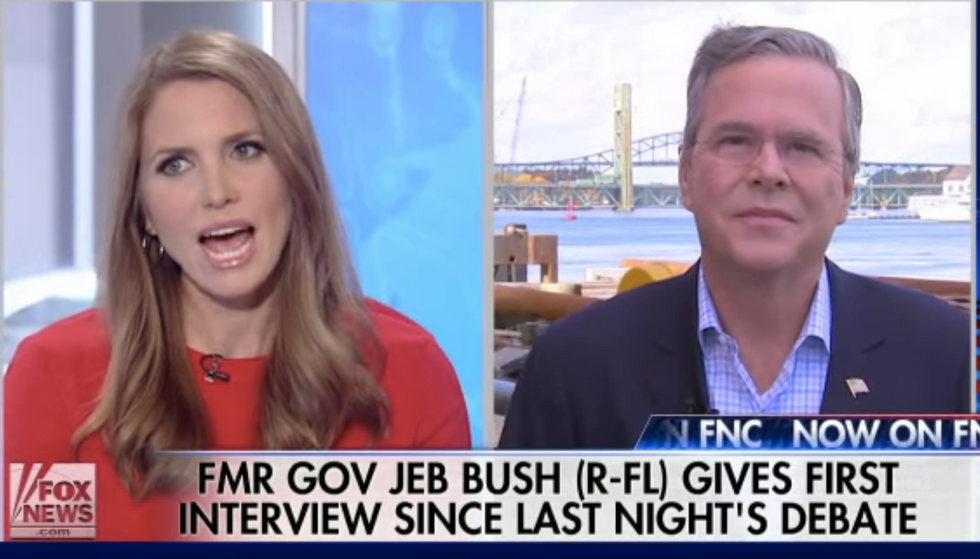 In an interview with Fox News' Jenna Lee, struggling presidential candidate Jeb Bush doubled down on his attack on Sen. Marco Rubio (R)'s record of failing to show up for Senate votes.

"In your reflection, in the last several hours, what do you think of that exchange?" Lee asked the former Florida governor.

"Look, I was cut off to be able to complete the thought," Bush replied. "I think I'm a do-er and I think we need a do-er as president of the United States, someone who has a proven record."

"Marco's my friend," he said, "I admire him greatly and he is a gifted politician, for sure, but I think we need to focus on who can lead, who can forge consensus."

Lee then went on to ask Bush about his apparent ambivalence toward campaigning, when he said, "I've got a lot of really cool things I could do other than sit around being miserable listening to people demonize me and feeling compelled to demonize them."

So why, she asked, did Bush feel to the need to "demonize" Rubio?

"I'm not demonizing anybody," he protested. Rubio, he said, "has the worst attendance record in the Senate."

Lee persisted, reading negative reviews of Bush's remarks from Politico and pressing him once again to admit that it was a "mistake" to attack Rubio's attendance record.

"It's a mistake to run for office and not serve," he said before launching into a recitation of his campaign talking points about how Americans are struggling to get by.

"Why are you pointing out Rubio and not some of the other candidates?" asked Lee. "What is it about Rubio that you feel particularly passionate about?"

Bush said that Rubio has the worst attendance record in the Senate and that he's a constituent before pivoting to attack President Barack Obama.

Lee went on to quote one commentator who said that Bush's decision to go negative on Rubio is a sign that his campaign's condition is terminal, which Bush greeted with a strained chuckle and an incredulous shake of his head.

Bush has struggled for a toe-hold as his campaign has floundered in a campaign season that has fixated on blowhard Reality TV star Donald Trump and soft-spoken pediatric neurosurgeon and dietary supplement salesman Dr. Ben Carson. As of Oct. 27, Public Policy Polling showed Bush tied for fourth place in the race with Carly Fiorina and Sen. Ted Cruz (R-TX).

Last week, the campaign laid off several salaried workers and began what Politico deemed to be the opening notes of its "death knell."