WATCH: Baltimore cop suspended for spitting in handcuffed black man's face -- then charging him with assault 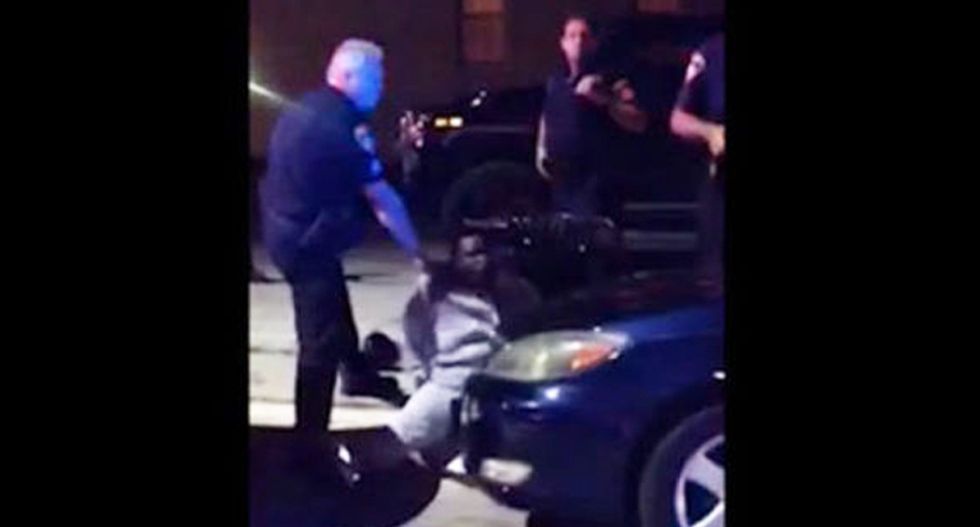 A 34-year veteran on the Baltimore Police Department has been suspended and is facing possible criminal charges after cell phone video showed him spitting in the face of a handcuffed black man whom he then charged with assault, reports WBAL.

Sergeant Robert Mesner has been placed on leave by interim Police Chief Kevin Davis over the incident earlier this week when Mesner arrested 31-year-old Alfred Evan who had been arguing with the officer after he broke up a group standing and talking on a porch.

In the video, Mesner can be seen following Evan and his companions as one of them complained that the cop was trying to provoke them. Mesner then grabs Evan, forcing him to the ground and handcuffing him before turning him on his side and spitting in his face.

A woman at the scene can be heard exclaiming, "You spit on him. He just spit on him!”

Mesner then took Evan into custody while another police officer held off the angry crowd by brandishing his Taser.

As Evan is placed into the back of a police van, a woman can be heard shouting, “You won’t Freddie Gray that one!” in reference to a black  Baltimore man who recently died while in police custody.

After viewing video of the incident,  Chief Davis suspended Mesner, telling reporters, "The video appears to depict the police sergeant spitting on the arrestee. That is outrageously unacceptable, and it directly contradicts the necessary community relationships we are striving to rehabilitate. The police powers of Sgt. Robert Mesner are now suspended, and a criminal investigation is underway. Our entire community deserves to be treated with dignity and respect.”

"There are very few things that you can do to another human being that are that disgusting. We take it very seriously," she said.

Watch WBAL's report as well as the cell phone video below: