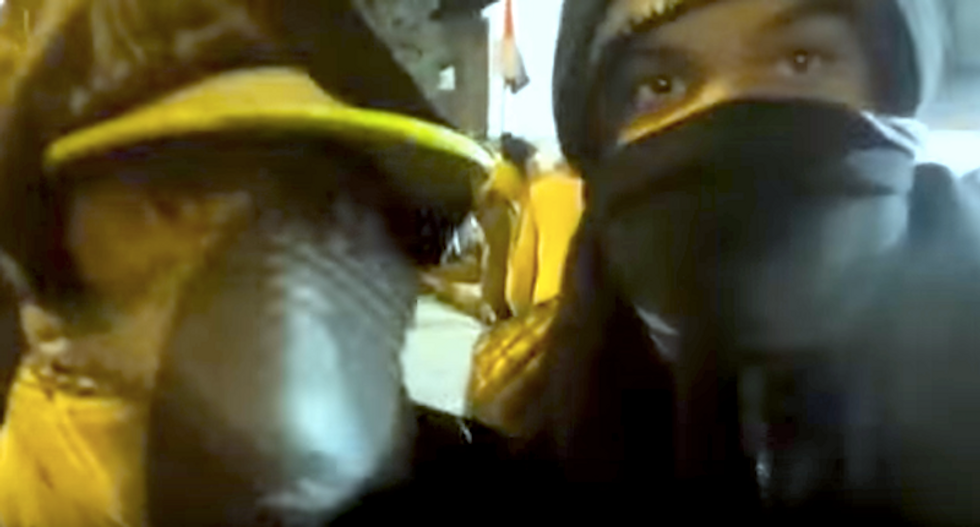 The men, described by some witnesses as white supremacists, wounded five demonstrators shortly before 11 p.m. outside the city's Fourth Precinct during an ongoing protest of the police shooting death of 24-year-old Jamar Clark.

Police said Tuesday afternoon that a 23-year-old white man and a 32-year-old Hispanic man had been arrested in connection with the shooting.

Demonstrators say masked men wearing military-style clothing have been harassing them for days during the protests, and Black Lives Matter Minneapolis posted a video Friday of two men on their way to disrupt the protests.

VIDEO: Last night 2 white supremacists, one carrying a pistol, showed up to our peaceful protest at the 4th precinct.After community members on livestream started questioning them they left without incident, then we later found a video of them en route to the protest brandishing a pistol and making comments including “stay white” and justifying the killing of Jamar Clark.It has come to our attention that members of this group plan on returning tonight to our candlelight vigil at 4:30, some may come armed. [See: http://pastebin.com/FkA1B2rq]They say they will be wearing the "4 of clubs" to identify one another, so watch for this badge or patch on their clothing.In the era of white supremacist terrorism against people of color across the U.S., we refuse to be intimidated by hate groups. We call on our supporters to join us tonight to continue to demand #Justice4Jamar and an end to violence against our community, whether by white supremacist citizens, or white supremacist Police like MPD union president Bob Kroll.

It's not clear whether the two men in the video are connected to Monday's shooting, and it's not clear how Black Lives Matter obtained that video.

White supremacists have discussed various strategies online for sparking confrontation at the demonstration, which they described as a "chimpout."

"Do you know if the BLM n*****s are planning to protest again tomorrow, and if so, at what time?" one white supremacist asked in an email chain.

They agreed to wear camouflage clothing and display a four of clubs to identify each other, and the white supremacist agitators argued over whether they should carry guns or wear Guy Fawkes masks.

The white supremacist mocked "social justice warriors" and other anti-racist whites, who they described in psychosexual terms.

"Best to act as much like a beta white cuck as much as you can," one of the racists said.

The activists said groups of men had been appearing at the demonstration and "acting shady" since Friday, so they put together a "safety committee" to watch for potential agitators and escort them away from the protests.

That's apparently what happened just before the shooting, when some of the protesters confronted three men, described by witnesses as two white men and possibly one Asian man.

Witnesses say the gunmen were trying to record demonstrators' faces on cell phone video shortly before opening fire, and the two groups argued.

Then a group of protesters charged at the men and demanded they remove their masks, but witnesses said the men shouted back, "f*ck no," and continued recording cell phone video.

A demonstrator, who spoke on camera with a mask covering his face, said one of the men was carrying a Black Lives Matter sign.

The witness said a demonstrator came out of the crowd and punched one of the white men, and another man stepped back and reached toward his waistband.

The demonstrators said the three men then walked away from the crowd and through a gate, where another protester punched one of the men, and the three men ran off with several protesters behind.

The witnesses said the men then stopped in an area where no cameras were present, turned around and opened fire on the six protesters who had been chasing them.

They wounded five of them, although police have said none of their injuries were life-threatening.

The gunmen then ran to an SUV and drove away, witnesses said.

Two of the men remain at large.

Minnesota is not among 33 states with "stand your ground" laws that allow for deadly force in self-defense when retreat is possible, although state law does permit a person to protect their personal property with deadly force.

Watch this interview with two witnesses to the shooting: