More gunshots fired overnight at Minneapolis protests: 'CALL THIS WHAT THE F*CK IT IS -- TERRORISM' 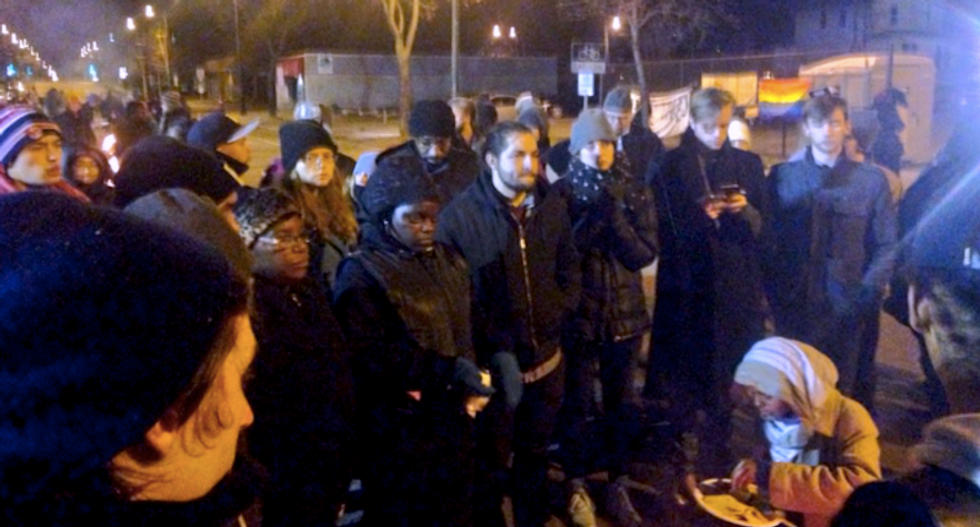 More gunshots were fired overnight at the site of ongoing protests of the Minneapolis police killing of Jamar Clark.

Police confirmed that shots were fired about 2 a.m. Wednesday near the Fourth Precinct, where five Black Lives Matters protesters were wounded about 27 hours before during a dispute with three white men, reported the Washington Post.

Authorities were unable to provide any details about the latest shooting -- including information about who fired the shots or why.

Reports of the gunfire circulated early Wednesday on social media, where video was posted online showing the moments shortly after the shots were fired.

The video shows demonstrators running for cover behind a barricade or lying flat on the ground near their campfires as activists shouted "get down."

"F*ck this laying down shit," one activist shouts. "Let’s shoot back."

Police arrested three men Tuesday afternoon in connection with the shootings and released a fourth man after questioning.

A spokeswoman for the local NAACP chapter claimed the police department allowed the men to bully protesters for days and stood by during the shooting and initially refused to help the victims.

Authorities have been reluctant to agree with witnesses who described the men as white supremacists, but social media posts by the suspects reveal frequent use of racial slurs and a fascination with Confederate imagery and right-wing militia groups.

The suspects -- identified by police as 23-year-old Allen “Lance” Scarsella, 21-year-old Nathan Gustavsson and 26-year-old Daniel Macey -- have not been formally charged but remain jailed on suspicion of assault.

Emails and online videos show the men plotted to disrupt the protests -- and activists said they appeared daily since last week, wearing military clothing, masks and bulletproof armor as they recorded video of demonstrators' faces and harassed them at their camps.

Their supporters claim the men acted in self-defense after witnesses said they were punched during an altercation with protesters, who asked them to take off their masks or leave, but many people have described the men as "terrorists."

The second night of gunfire has only strengthened that view for some.

Watch video recorded after the shooting and posted online by Unicorn Riot: