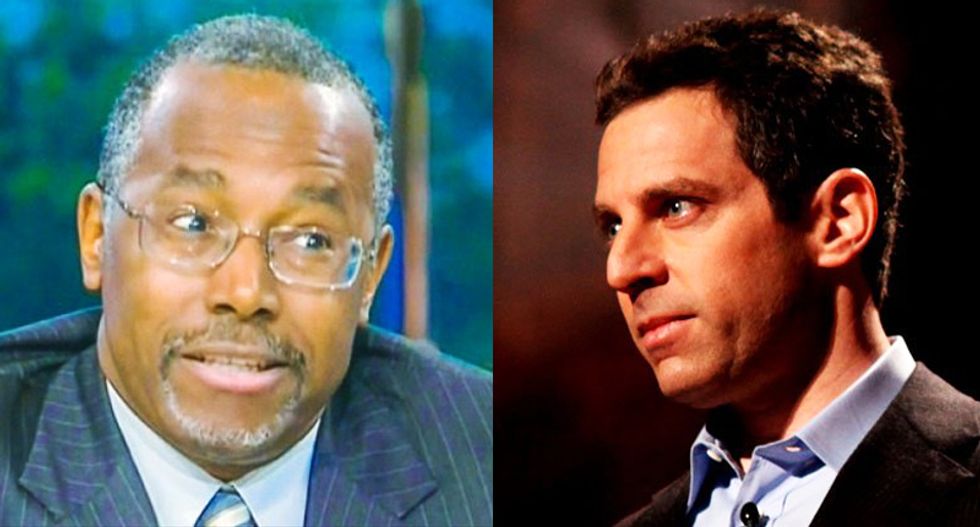 During a discussion on whether the U.S. should allow Syrian refugees into the county, neuroscientist and atheism advocate Sam Harris continued his personal jihad with author Noam Chomsky while finding common cause with Christian conservative GOP presidential candidates who want to keep the refugees out.

In his podcast interview with author Douglas Murray, Harris lamented the "demagoguery on both sides" by the political parties, while accusing President Barack Obama of being "politically stupid" in the way he addresses the threat of Islamic fanaticism. Harris did have  kind words for Texas Republican Senator Ted Cruz, despite admitting that he is a "religious maniac.'

"The Republicans are right to be completely outraged by this -- and they're completely crazy," Harris explained."This is a terrible situation to be in politically."

"Take the personalities of the people on the right out of the equation. Is it crazy to express, as Ted Cruz did, a preference for Christians over Muslims in this process?" Harris asked. "Of course not. What percentage of Christians will be jihadists or want to live under Sharia law? Zero. And this is a massive, in fact the only, concern when talking about security. We know that some percentage of Muslims will be jihadists inevitably... So it is not mere bigotry or mere xenophobia to express that preference. I hope you understand that I am expressing no sympathy at all with Ted Cruz's politics or with Ted Cruz. But it is totally unhelpful to treat him -- though he actually is a religious maniac -- like a bigot on this point. This is a quite reasonable concern to voice."

It was toward the end of the broadcast that Harris had to take a shot at author Chomsky with whom he has had a running battle over ideology and political worldviews.

"Given a choice between Noam Chomsky and Ben Carson, in terms of the totality of their understanding of what’s happening now in the world, I’d vote for Ben Carson every time," Harris stated. "Ben Carson is a dangerously deluded religious imbecile, Ben Carson does not…the fact that he is a candidate for president is a scandal…but at the very least he can be counted on to sort of get this one right. He understands that jihadists are the enemy."

Listen to the broadcast below: