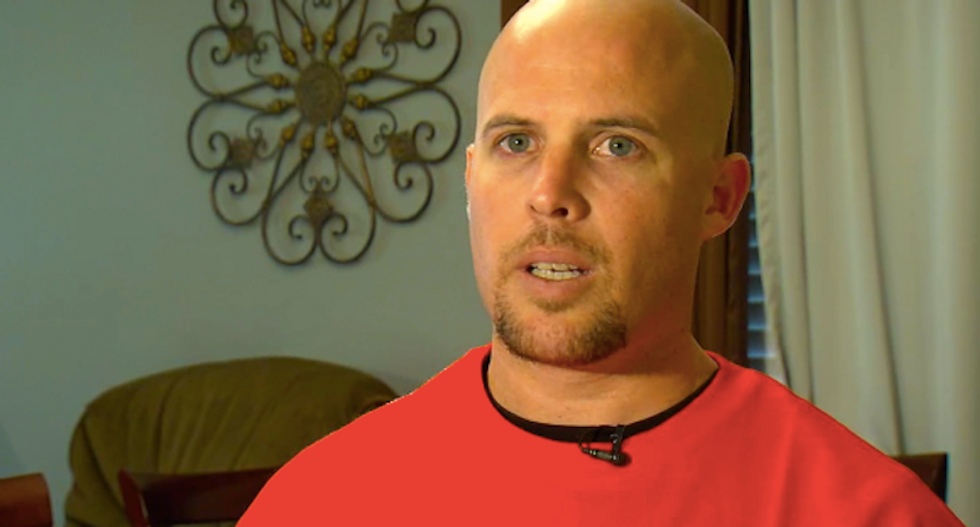 An Arizona man who slipped off the FBI's radar as he drove cross-country to threaten a Muslim enclave was apparently contacted by state troopers but let go with a warning before he reached his target.

Jon Ritzheimer, who has organized anti-Muslim rallies in the Phoenix area, posted video of himself holding a gun and discussing his plans to provoke a confrontation in Islamburg -- a rural community in upstate New York that has spawned conspiracy theories and been targeted by militia threats.

The FBI issued an alert to law enforcement agencies to watch out for Ritzheimer, who said he received calls from federal agents and New York state troopers as he traveled in Pennsylvania.

"They asked me why I was coming to New York," Ritzheimer told KNXV-TV. "I told them I was going to protest a Muslim group, but I was also helping my friend move to New Hampshire."

Ritzheimer said he stopped using his credit cards and turned off his cell phone to avoid being tracked by law enforcement.

“It was at that point that I hung up and went off the grid,” Ritzheimer said.

The U.S. Marine Corps veteran and his friend stopped along the way at several mosques he claimed were engaged in radical activities, and he intended to confront staffers of the Islamic Post newspaper -- which described him as "American Taliban."

“I believe there is an evil infiltration going on in our country,” Ritzheimer said.

He insisted he did not threaten to harm anyone, but intended only to "lay into them" to dispute the comparison to Islamic militants.

Ritzheimer said state troopers told him he would be stopped and searched when he entered New York, and they told him it would be illegal to bring firearms into the state -- which has some of the strictest gun laws in the nation.

He said the FBI agent was polite, but Ritzheimer complained that the New York state trooper would not work with him and repeatedly interrupted him.

"They basically told me they would violate my rights, so I turned off my phone and took cash out of my account so they couldn't track me," Ritzheimer said.

Ritzheimer would not say whether he entered New York, but he must have, because he said he eventually reached his destination in New Hampshire.

A friend who is active with the Arizona Militia posted video of himself and Ritzheimer standing outside FBI offices Sunday in Phoenix, where they mocked federal agents' inability to keep track of the anti-Muslim activist.

SHARE! BREAKING! FBI LOOKING FOR JON RITZHEIMER AND LOST TRACK OF HIM. ...OR DID THEY? IF THEY CANNOT KEEP TRACK OF AN AMERICAN CITIZEN HOW CAN THEY KEEP TRACK OF SYRIAN ISLAMIC TERRORISTS?(refugees)Brooke Agresta Mike Boggs Melissa Cooper Eric Ej Parker

"The funny thing we should mention, if the FBI lost track of a well-known American citizen who's been in various media publications, how is it that they're going to keep track of Syrian refugees?" Cooper says in the video.

Ritzheimer, who recorded his own video of an interview conducted in his home by a "Muslim reporter" from KNXV, said he intended to travel again to New York -- but he said that visit would be unannounced.

Watch an interview with Ritzheimer posted online by KNXV-TV: