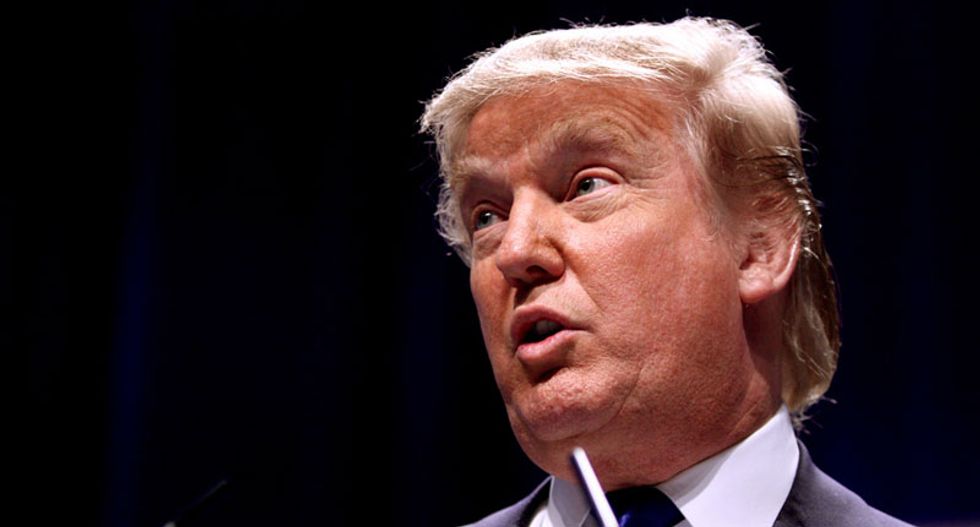 Donald Trump hasn't just been popular with the Republican party as a presidential candidate. He's also served as a recruiting tool for white supremacists, Politico reports.

White nationalist leaders are capitalizing on sentiments drummed up by Trump to grow their movement. Stormfront, a popular white supremacist website, reports a traffic spike related to Trump's candidacy and David Duke says Trump has allowed racist groups to openly talk about topics that up till now were considered taboo.

“Demoralization has been the biggest enemy and Trump is changing all that," Stormfront founder Don Black told Politico. “He’s certainly creating a movement that will continue independently of him even if he does fold at some point.”

Black told Politico that Stormfront has been getting millions of new visitors and that Trump is driving growing web traffic. Stormfront gets 30-40 percent spikes when Trump makes news on immigration or Muslims. The Trump-related traffic surge to the white supremacist site is prompting Black to upgrade his servers to handle it.

According to Politico, Trump has discouraged the most obvious forms of racism by firing staffers for racist social media posts or barring a Confederate flag-carrying supporter from a Virginia rally. But Trump's comments about Muslims and Latinos have blown the lid off a simmering under-layer of hatred that has been too ugly for mainstream politicians. Until now.

On Monday, Trump vowed to ban all Muslims from entering the United States -- a move that was condemned by conservatives from Dick Cheney to Paul Ryan to Israeli Prime Minister Benjamin Netanyahu. But their criticism may be too little, too late.

As the New York Times pointed out in a Thursday editorial, Trump's tone is not new. He has, in fact, been pushing the Republican party to further extremes and has been leading the party primary field for months.

"The Republican rivals rushing to distance themselves from his latest inflammatory proposal — a faith-based wall around the country — have been peddling their own nativist policies for months or years. They have been harshening their campaign speeches and immigration proposals in response to the Trump effect," the Times editorial board points out. "And party officials around the country, attuned to the power of fear, have developed homegrown versions of the Trump approach. In 31 states, governors — most but not all Republicans — have formed an axis of ignorance, declaring their borders closed to refugees fleeing the Islamic State in Syria."

“When well-known public figures make these kind of statements in the public square, they are taken as a permission-giving by criminal elements who go out and act on their words," he said.

This was seen after Trump launched his campaign by calling Mexican people drug runners and rapists. Two Boston men beat and urinated on a Latino homeless man and said they did it because they wanted to "make America great again," using Trump's campaign line. Trump didn't condemn this criminal act, and instead said his supporters are "passionate."

The violence in response to the heightened anti-Muslim rhetoric seems to have already begun.

A Muslim family in Plano, Texas, reports that rocks have been thrown into their windows twice this week. The Council on American Islamic Relations, said there has been a spike in reported hate crimes. A Muslim store owner in Queens was beaten by a man who said he was on a mission to "kill Muslims."

The New York Times hammered Trump and warned that the "darkness" that fell over the United States during World War II when Japanese Americans were interned could be returning.

"The racism behind the agenda of the right wing on immigrants and foreigners has long been plain as day," the editorial concluded. "Mr. Trump makes it even plainer. After his remarks on Muslims, how many of Mr. Trump’s rivals have said they would reject his candidacy if he won the nomination? As of Wednesday, none."