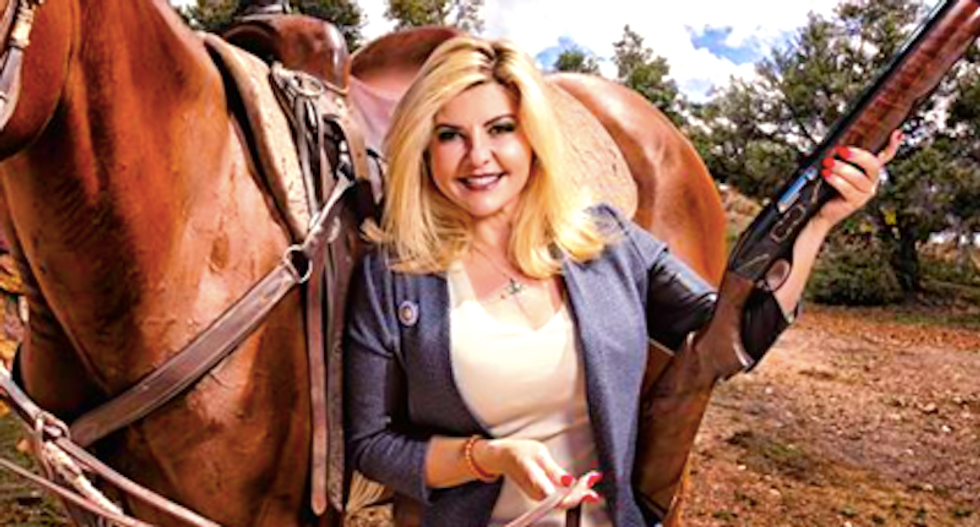 A Bundy-backing former fire chief has thrown cold water on claims by a Nevada Republican who says FBI agents are posing as militiamen near an Oregon nature preserve.

Chris Briels resigned this week as Harney County's volunteer fire chief to continue serving on the extralegal Committee of Public Safety established last month by Ammon Bundy -- who is leading a group of armed militants who have seized the Malheur National Wildlife Preserve.

Briels figured prominently in a press release issued Wednesday by Nevada Assemblywoman Michele Fiore, but the former fire chief later said the GOP lawmaker's claims about him were simply untrue.

Fiore, in a press release issued by a right-wing group of lawmakers called the Coalition of Western States, said she spoke by phone to Briels, and she said the former fire chief told her that he spotted men posing as militia members "poking around the Armory and following townspeople."

The lawmaker said Briels told her that he pulled the men over, although he does not possess law enforcement authority to do so, and discovered they were actually FBI agents posing as militants.

The former fire chief, Fiore claimed, reminded her that Sheriff David Ward and County Judge Steven Grasty -- two local targets of the militants' anti-government wrath -- had been warning community members that militants had been following and harassing residents.

Briels, however, told a somewhat different story to a reporter from US News and World Report.

The former fire chief said he had indeed spotted two undercover FBI agents in Burns, where Briels served as fire chief for 26 years before retiring in 2010 and accepting a volunteer position as the county's fire chief.

But he said the federal agents were not posing as militia members.

He said the men drove away from the armory in three vehicles, which he followed to a nearby McDonald's.

Two men in a black SUV identified themselves as businessmen named “Chuck” and “Mike” who were interested in opening a shop in Burns, but Briels said he didn't believe them.

Briels called the sheriff's office, and a deputy told him the men were undercover FBI agents.

A representative from the FBI's field office in Portland, Oregon, declined to say whether undercover agents were working near the ongoing occupation of the federally owned building and surrounding land.

Law enforcement has not directly engaged the militants, some of whom have expressed a wish to spark a violent confrontation with government authorities in hopes of starting a civil war.

Rumors about undercover federal agents posing as militants or even reporters have circulated inside the nature preserve and from associates on social media.

Some of the militants have been identified by name as federal informants, and some of them have engaged in physical fights or left the occupation over these rumors and other disputes.

Grasty, the top elected administrative official in the county, said that -- contrary to the militants' claims -- he has no idea what the FBI is doing in response to the occupation.

“I just don’t know what they’re doing -- and to be honest, I’ve worked hard not to," Grasty said.

Grasty and the sheriff, in addition to other county officials, have been served bogus legal documents by the militants -- who are planning to hold an extralegal "common law grand jury" to possibly indict uncooperative elected officials on treason charges.

The militants are angry that Grasty and Ward have criticized their tactics -- even as both men say they share some of the same anti-government concerns.

The out-of-state militants are also furious that Grasty won't allow them to use the county fairgrounds or other government property to hold a community meeting of the Committee of Public Safety -- which appears to be intended to replace the duly elected county government.

Today the #bundymilitia made this road within the refuge. #oregonstandoff https://t.co/uRJrIYZLNX
— Amanda Peacher (@Amanda Peacher)1452828187.0