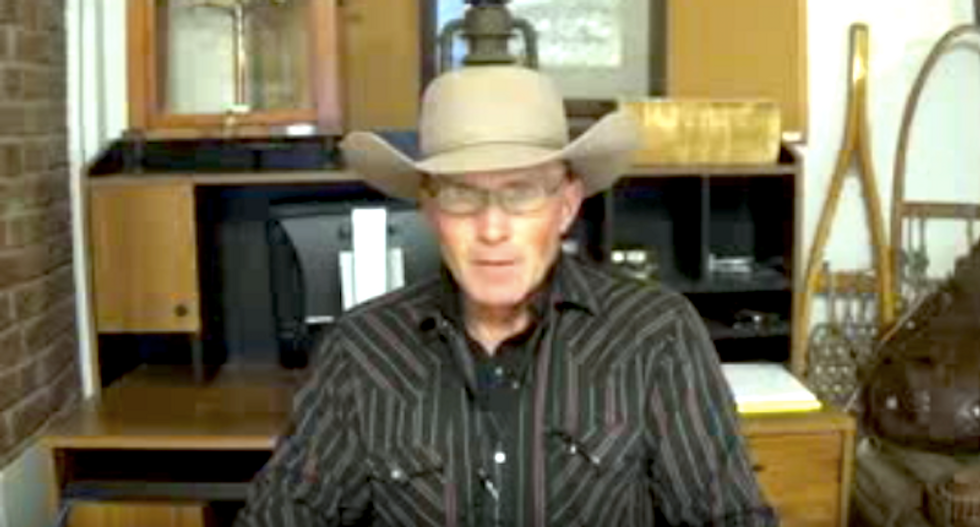 The Bundy militants and their supporters are trying to turn LaVoy Finicum into a right-wing martyr, but two witnesses deny that he was shot and killed in cold blood by law enforcement officers.

UPDATE: New details emerge about LaVoy Finicum’s death: ‘He’s like just shoot me — and they did’

Finicum was part of a convoy headed Tuesday evening from the Malheur National Wildlife Refuge to the John Day Senior Center, where the armed militants apparently intended to set up a Committee of Safety as a form of shadow government ahead of a possible armed takeover of federal land in Grant County, Oregon.

State Rep. Michele Fiore (R) and the "Bundy Ranch" Facebook page shared similar accounts of Finicum's fatal shooting, each claiming the rancher had been shot with his hands up while his friends were arrested.

But that's not exactly what happened, according to two accounts posted in Facebook videos.

Melvin Lee cited one of militant leader Ammon Bundy's bodyguards, Mark McConnell in his video, saying that McConnell and Bundy were in a vehicle traveling north up US 395 with a second bodyguard, Brian "Booda" Cavalier, when they were stopped by law enforcement officers serving an arrest warrant.

A second vehicle -- which contained Ryan Bundy, Ryan Payne, Shawna Cox, Finicum and Victoria Sharp -- went around their stopped comrades' vehicle but ran into a blockade about a mile away.

"There happened to be some arguments between the guys in the truck," Lee said. "Somehow they got Ryan Payne pulled out of the truck, apparently. LaVoy had took off -- he ended up hitting a snowbank, I guess, trying to get around the blockade. After he hit that snowbank, he came out of that truck and he charged at the law enforcement (officers) -- as I understand it."

McConnell -- who was taken into custody, questioned and released -- recorded a second video early Wednesday morning, saying that Payne told him that he and Finicum got into an argument in the pickup after the rancher fled the police stop.

He said Cox told him that Finicum crashed into the snowbank, jumped out of the manual transmission diesel pickup with the rear wheels still spinning and charged toward law enforcement officers.

The bodyguard said Cox and Payne each told him that Finicum charged toward officers before he was shot, and he explicitly denied that the rancher had surrendered or complied with law enforcement.

"He was not on his knees, none of that," McConnell said. "He was none of that nonsense. You know, that was a miscommunication on somebody else's part. But he went after them. He charged them. You know, LaVoy was very passionate about what he was doing up here."

Sharp, an 18-year-old singer from Montana, claimed in an interview that Finicum had gotten out of the crashed truck and walked toward officers with his hands up, daring them to shoot.

Finicum claimed early on during the occupation that he was willing to die for his interpretation of the U.S. Constitution.

“I have been raised in the country all my life,” Finicum said in a widely viewed television interview, shrouded in a blue tarp with a rifle on his lap. “I love dearly to feel the wind on my face. To see the sun rise, to see the moon. I have no intention of spending any of my days in a concrete box.”

McConnell said the Finicum's death should not be used to encourage further violence.

"If you weren't up there, shut your mouth, shut your f*cking mouth -- no one wants to hear from you," McConnell said. "What happened up there, it was tragic -- bottom line. We were all arrested, some of them are still in federal custody. LaVoy is deceased, but Ryan was not wounded, he was hit with a piece of shrapnel. Right now this town is being flooded with law enforcement.

All or most of the women or children left the wildlife refuge overnight, but some of the armed militants remain -- apparently under the command of Arizona militiaman Blaine Cooper -- and McConnell said the area was being "flooded with law enforcement."

Lee struck a similar tone in his video.

"This right here is a way to slow you down, calm you down and think -- wait for the information to come out, people," Lee said. "And another thing, we've been trying to negotiate with the refuge, as far as Blaine and them, but they're not answering the phone."

(Update: The headline was changed to reflect additional eyewitness testimony from Sharp, which was also added to the story, as well as Melvin Lee's account of the encounter on route 395.)

(Additional update: McConnell and Lee were initially described as eyewitnesses, but some readers pointed out their accounts were second-hand. The headline has also been changed to describe their claims as disputing conspiracy theories, rather than definitively knocking them down. The investigation remains ongoing.)