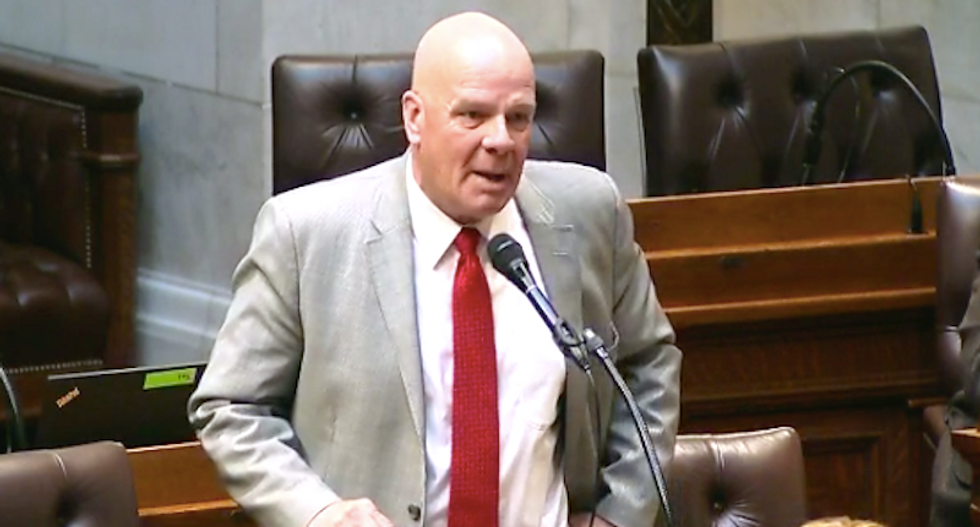 A Wisconsin Republican flipped off a Democratic lawmaker who called him out for a racist press release he issued blaming black criminals for the state's problems.

Rep. Bob Gannon (R-Slinger) said Milwaukee's black residents, rather than the state's Republican governor and GOP-dominated legislature, were an "anchor holding back the ship of state as far as jobs is concerned."

"Milwaukee leads in murders and mayhem per capita, with a large number of these crimes occurring in mainly black neighborhoods," he said in the Jan. 6 statement. "What employer will build or expand when they fear muggings, carjackings, attempted murder, or other serious criminal threats to their employees?"

"Your drugs, your crime knows no border," Gannon said. "We're right next door, we're locking them up in our county jail. Thankfully, we have police and a district attorney who are making sure we're locking people up in our prisons."

Minority Leader Peter Barca (D-Kenosha) said he thought Gannon should apologize if he had been indeed misunderstood about the purpose of his racist statement, and the Republican made an obscene one-finger gesture.

"Did he just give me the finger?" Barca said. "I'd like to make a motion to reprimand him. He just stood up (and) I will plainly show he's giving me the finger. Now what is wrong with you?"

Gannon, who made news last month when he urged gun owners to cleanse society of criminal "scumbags," quickly apologized for the rude gesture.

"I do apologize for the gesture," Gannon said. "I didn't like the way I was attacked."

Watch Barca's reaction to the obscene gesture posted online by the Journal Sentinel: