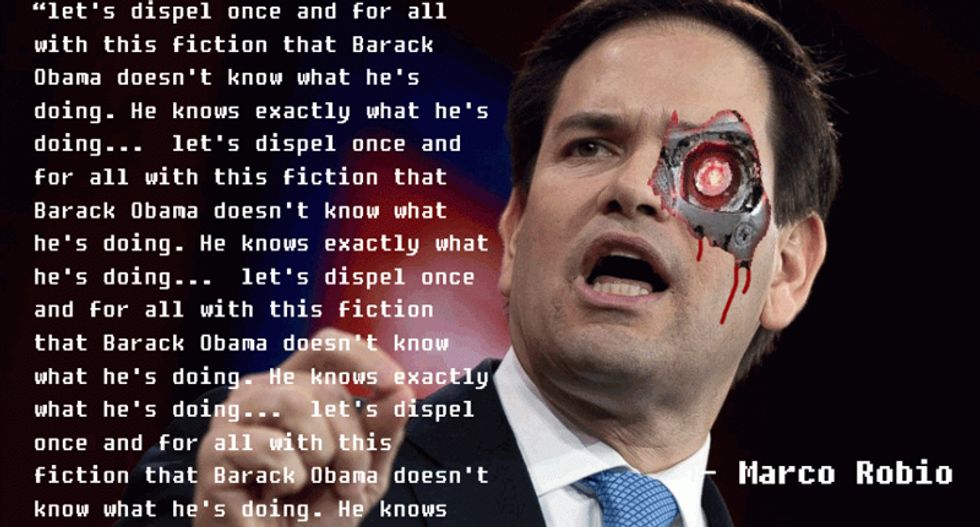 Marcos Rubio's ascent as the establishment Republican candidate for president may have crashed and burned Saturday night after his over-reliance on a single talking point regarding President Obama led viewers and commentators to conclude he came off like glitchy preprogrammed robot.

This is not the first time it has been noted that Rubio's responses to questions seems preprogrammed.

In 2011, Jonathan Chait wrote a column entitled "Is Marco Rubio Secretly A Robot?"

"Do you get the feeling that 'Marco Rubio' is not an actual human being at all but some kind of computer program designed by the Republican Party? Imagine they had the technical know-how to create a candidate like this. What would they come up with? They'd come up with Marco Rubio, a cinematically handsome Latino from Florida who hews to the Tea Party line while spitting out patriotic cliches that sound as if they were programmed like a computer," he wrote before stating, "I'm not saying I'm sure Rubio is a robot. I'm just saying that I want to watch him walk through a metal detector."

As for Saturday night's performance, Twitter users joined ranks in attacking Rubio as being a tightly-scripted talking points machine.

I've watched Rubio for a long time, always thought that critique of him as a talking-points robot was way overblown. But oh dear.
— Ross Douthat (@Ross Douthat) 1454809039.0

After last debate I said Rubio talks like a robot. After tonight, it may be because he is a robot - though a poorly programmed one
— Taegan Goddard (@Taegan Goddard) 1454818848.0

Triply strange about Rubio tonight is that he's been looser, less programmed, DEFT on the trail over recent days. So why the robot now?
— Frank Bruni (@Frank Bruni) 1454812093.0