Nikki Haley: Trump's campaign is 'just another project like Trump University and Trump Vodka -- all failures' 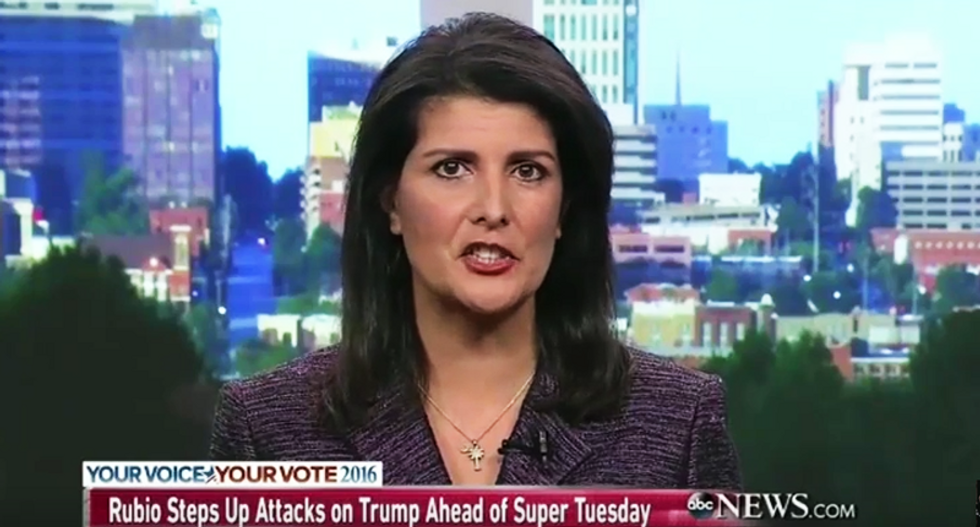 Haley, who recently endorsed Marco Rubio, said she was proud of the Florida senator for finally punching back at Trump's bullying.

"I don't know if he waited too long, but I'll tell you Donald Trump is everything we hear and teach our kids not to do in kindergarten. And we have seen this behavior over and over again that's unacceptable," she stated. "And I think what we saw from Marco is exactly what we tell our children also, if a bully hits you, you hit back."

Turning to Trump, she brought up his issues involving tax audits and the lawsuits over Trump University before dismissing his presidential campaign as a "Trump project."

Asked by host George Stephanopoulos how a Trump nomination would impact the Republican Party, Haley called the prospect "scary."

"Well, it's scary. I mean, this is where we think these next few states matter, because it will start to ask him the questions and get the answers," she replied. "We're seeing a lot of things from Donald Trump with no answers. I've seen him talk about being for universal health care. I've seen him talk about wanting to do things and he's not giving us the answers for it. So, I think what he'll do to the Republican Party really makes us question who we are and what we're about. And that's something we don't want to see happen."