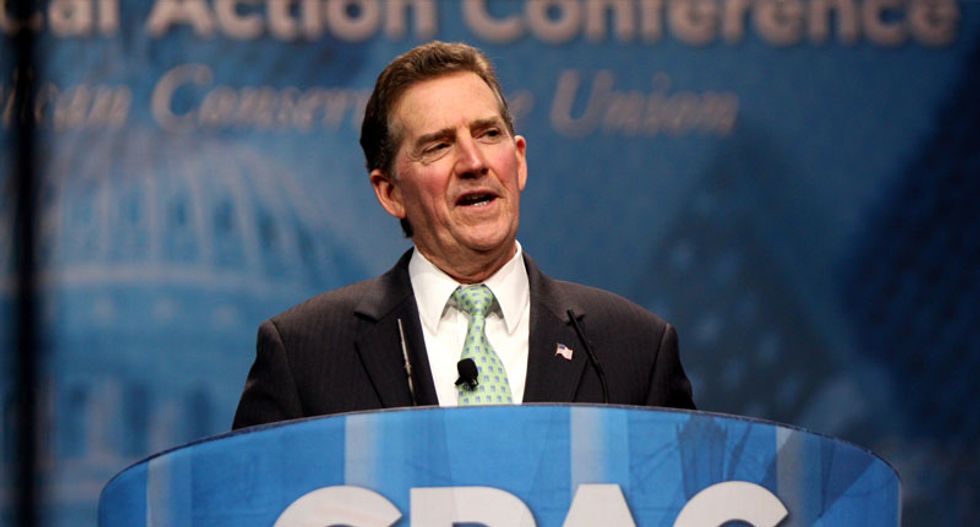 American conservative organisations have loomed large in Australian politics in the past week. Former prime minister Tony Abbott delivered a speech in New York to one such group, the Alliance Defending Freedom (ADF). And, on Tuesday, former defence minister Kevin Andrews will be in Washington to speak on Australian security and defence at a gathering of the Heritage Foundation.

Even many Americans don’t know much about organisations like the ADF and Heritage. But these groups play a critical role in advancing conservative policies. Here’s a look at how each is remaking American politics – and what it might mean for Australia.

The ADF is not quite a lobby group. Originally called the Alliance Defense Fund, it is a legal advocacy group. Unlike lobbying groups, which typically work to influence legislation, the ADF aims its arrows at the judiciary.

Through test cases, legal strategies, and consultation with state legislators, the ADF seeks to promote conservative interpretations of the law, particularly on issues important to the religious right. It has more than 40 lawyers on staff, and has trained more than 1300 law students and 1700 practising lawyers.

It is primarily interested in any cases to do with gay rights or reproductive rights. In 2003, the ADF filed an amicus brief defending the right of states to criminalise gay sex. The Supreme Court subsequently ruled such laws unconstitutional. Having lost that fight, it turned its attention to defeating same-sex marriage laws.

Same-sex marriage is now legal nationwide in the US. So, the ADF has not been very effective on the issue. But, in recent years, the ADF – like a number of other conservative legal advocacy groups – has shifted tactics. Now it carries the banner of “religious liberty”, arguing that legislation expanding same-sex rights or reproductive access infringes on the religious freedom of conservative Christians.

Don’t want to bake a cake for a same-sex wedding? Worried that your child’s biology textbook contains references to contraception and sexually transmitted infections? Call the ADF.

On a broader scale, the profusion of “religious freedom restoration acts” (RFRAs) in the US can be traced to work done by groups like the ADF, which consults state legislatures on how to draft RFRAs that have the best possible chance of surviving a legal challenge.

While public pressure has put the brakes on RFRAs in many states, the strategy has had a major impact nationally.

The ADF was the prime mover behind the Hobby Lobby case, which argued that for-profit corporations could not be required to provide contraceptive coverage for their employees if such coverage violated the owners’ religious beliefs. The Supreme Court found in favour of Hobby Lobby and the ADF, essentially ruling that not only were corporations people, but they were people with inviolable religious rights.

The alliance was founded in 1994, in the midst of the culture wars in the US. Leaders of the religious right felt that the American Civil Liberties Union (ACLU) had remade the relationship between church and state, pushing religion further and further outside the public sphere.

As a result, Christian leaders like Bill and Vonette Bright (founders of Campus Crusade for Christ) and James Dobson Jr. (founder of Focus on the Family) pooled their resources to create an ACLU for the religious right. Their goal was to use legal arguments, rather than religious ones, to advance their agenda. Twenty years later, the New York Times deemed the ADF the “largest legal force of the religious right”.

The Heritage Foundation is a think-tank. It uses policy papers, political advocacy, and public relations to support its conservative policy goals. Its range is expansive, covering everything from free-market economics to decentralised governance to a muscular foreign policy.

Though the Heritage Foundation was founded by members of the New Right more interested in domestic policy, it has had a profound effect on defence spending and military action in the US. Ronald Reagan got the idea for his Strategic Defense Initiative (popularly derided as Star Wars) from Heritage. And Heritage policymakers were at the leading edge of the push for the first Iraq War in 1990.

But Heritage is not as reliably neoconservative as the American Enterprise Institute, another prominent conservative think-tank. For instance, Heritage founder Paul Weyrich became an early conservative critic of the second Iraq War, arguing the US had to be more strategic about the wars it entered. He also opposed the doctrine of pre-emptive war.

Heritage has been one of the most effective policy shops in Washington since its founding in 1973. In 1981, when Reagan became president, Heritage published Mandate for Leadership, which was essentially a blueprint for a conservative administration. Reagan loved it. He passed it out to key administration officials and instituted a majority of its recommendations (which numbered in the thousands).

Heritage also worked closely with Speaker Newt Gingrich on the Contract with America, the agenda that drove the 1994 Republican landslide.

Another more recent measure of success occurred in 2013. Republican Jim DeMint resigned from the Senate to take up the leadership of the Heritage Foundation. Think about that. DeMint thought he could exercise more influence leading a think-tank than as a senator.

Heritage pays a lot more than the Senate, but still. That’s a big move.

So, do these organisations matter?

At a time when all eyes are on the Republican primaries, it’s important to remember that elected officials are only a small part of how policy is made in the US – and in Australia.

That Australian leaders like Abbott and Andrews are spending time at these institutions suggest they understand that. And given that they are visiting some of the most successful conservative organisations in the US, there’s a good chance they’re picking up some ideas to try out when they get home.