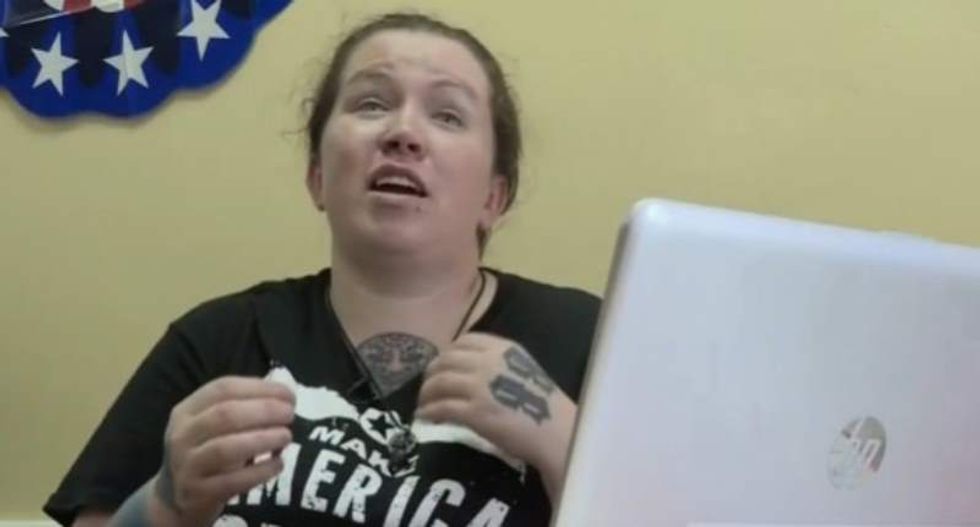 The story, which aired on Tuesday, focused on Grace Tilly and her family, and shows both her and her 11-year-old son phone-banking for the Republican front-runner.

"I definitely think, with Trump's business savvy, his mind, I think that he’s going to be the best one that’s going to be able to help us," she tells PBS. "Our family has been impacted in a very big way by the recession. We definitely at times are living paycheck to paycheck. And my husband is having hard time finding work as well."

But the report does not mention the two tattoos seen on her hand: a stylized version of the Celtic Cross called "Odin's Cross," which the Anti-Defamation League said "has become one of the most popular white supremacist symbols around," as well as a stylized version of the number 88, which the League has identified as "a white supremacist numerical code for 'Heil Hitler.'"

The only mention of race in the report comes after the family is seen at a March 9 rally while a protester is removed from the event.

"All these protesters and all this stuff, and people saying he's racist, and then the Black Lives Matter, you know what? Red lives matter," says her father-in-law, Pete Tilly. "Because when you bleed, we all bleed red."

White supremacist groups have placed "robocalls" on behalf of the real estate mogul, who won the state's Republican primary on Tuesday, and have also publicly thanked Trump for spotlighting their views.

PBS' report on the Tillys, as aired on Tuesday, can be seen below.